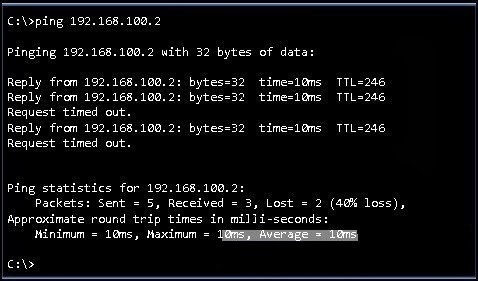 Refer to the exhibit. A host is having problems maintaining a connection to a server at 192.168.100.2. Which statement best describes the output of the ping command?
The server is shut down.
The server has no route back to the host.
Two routers along the path are not responding to pings.
Some packets made it to the destination.
Ping services are not supported on the destination.

6. At which point do individuals and small businesses connect directly to the ISP network to obtain Internet access?
• at a POP
• at an IXP
• at a Metro Ethernet link
• on the ISP extranet

7. What information is contained in the numbered RFCs maintained by the IETF?
• the rules for acceptable use of websites and e-mail
• the descriptions of various hardware components that connect to the Internet
• the specifications and rules for how devices communicate over an IP network
• the standards for cabling and wiring for local Ethernet networks

8. Which network support services team is responsible for testing a new customer connection and for monitoring the ongoing operation of the link?”
• customer service
• help desk
• network operations
• on-site installation

5. When does a host device issue an ICMP echo request?
to initiate a ping to determine if a destination address is reachable
to respond to a DNS name query
to broadcast its identity to its locally connected neighbors
to request the MAC address of a destination IP address


6. Refer to the exhibit. Host A cannot connect to the web server at 192.168.100.2. Based on the output of the tracert command, which device is most likely causing the problem?
Router A
Router B
Router C
Router D
Router E
Router F

10. Which ISP network support systems team will typically contact the customer once a new circuit is ready and guide the customer in setting up passwords and other account information?
• help desk
• customer service
• network operations center
• on-site installation team
• planning and provisioning

17. What is the purpose of an RFC?
• to provide the connection point for multiple ISPs to the Internet
• to document the development and approval of an Internet standard
• to connect a business to an ISP
• to provide data communication services to ISP customers
• to monitor network performance and connection status of ISP clients

19. What was the original purpose of the Internet?
• voice communication
• marketing
• research
• commerce

Now I feel stuidp. That’s cleared it up for me