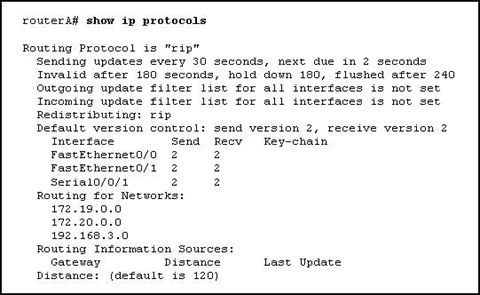 Refer to the exhibit. What is the maximum number of RIP routers that could separate HostA and HostB and still leave the hosts with connectivity to each other?
• 14
• 15
• 16
• 17

3. In which situation would a company register for its own autonomous system number (ASN)?
• when the company’s ISP adds connection points to the Internet
• when additional routers are added to the corporate internetwork
• when more than one interior routing protocol is used
• when the company uses two or more ISPs

Refer to the exhibit. If all routers are running RIP and network 10.0.0.0 goes down, when will R3 learn that the network is no longer available?
• in 30 seconds
• in 60 seconds
• in 90 seconds
• Immediately

11. What is the purpose of the network command used when configuring RIP?
• to specify whether RIPv1 or RIPv2 will be used as the routing protocol
• to allow the router to monitor RIP updates that occur on other routers
• to identify which networks on the router will send and receive RIP updates
• to configure the IP address on an interface that will use RIP
• to identify all of the remote networks that should be reachable from the router

13. What is the purpose of a routing protocol?
• It is used to build and maintain ARP tables.
• It provides a method for segmenting and reassembling data packets.
• It allows an administrator to devise an addressing scheme for the network.
• It allows a router to share information about known networks with other routers.
• It provides a procedure for encoding and decoding data into bits for packet forwarding.

24. What term refers to a group of networks that uses the same internal routing policies and is controlled by a single administrative authority?
• Internet
• intranet
• virtual private network
• autonomous system

A new junior network intern connects a laptop to an access layer switch in the wiring closet. After configuring a terminal emulation program, the intern presses the Enter key, and the S1_ATC_E2> prompt appears. What could have been done to better protect the switch?
Create a banner message.
Create a console password.
Use the enable secret command.
Use the service password-encryption command.