1. Which two OSI model layers have the same functionality as two layers of the TCP/IP model? (Choose two.)

Explanation: TCP/IP is a protocol stack that contains a lot of other protocols such as HTTP, FTP, and DNS. The TCP/IP protocol stack is required to be used when communicating on the Internet. A MAC address is an address that is burned into an Ethernet network card. OSI is the 7 layer model that is used to explain how networking works.

3. Match the TCP/IP model layer to the function.

5. Which statement is true about the TCP/IP and OSI models?​

6. Which three layers of the OSI model map to the application layer of the TCP/IP model? (Choose three.)

7. Which three elements do all communication methods have in common? (Choose three.)

Explanation: All communication methods include a message source, destination, and a transmission medium.

Explanation: In twisted-pair cables, wires are grouped in pairs and twisted together to reduce interference. The pairs of wires are colored so that the same wire at each end can be easily identified.

9. Which data encoding technology is used in fiber-optic cables?

Explanation: Data is transmitted across a network on media. Modern networks primarily use three types of media to interconnect devices:

10. What is one advantage of using fiber optic cabling rather than copper cabling?

Explanation: Copper cabling is usually cheaper and easier to install than fiber optic cabling. However, fiber cables generally have a much greater signaling range than copper.

11. Which type of network cable is commonly used in backbone networks and telephone companies?

Explanation: Coaxial cable is the kind of copper cable used by cable TV companies. It is used to connect TV sets to the wall jacks that are connected to a cable TV company. It is also used for connecting the various components which make up satellite communication systems.

13. Which criterion can be used to select the appropriate type of network media for a network?

14. Refer to the graphic. What type of cabling is shown? 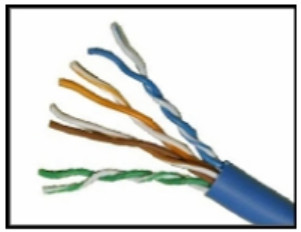 15. Which type of address does a switch use to build the MAC address table?

Explanation: Encapsulation is the process of placing one type of message format into another. On computer networks this process is known as encapsulation. Once a message is encapsulated, it is called a frame. Explanation: Every frame that enters a switch is checked for new information to learn. It does this by examining the source MAC address of the frame and port number where the frame entered the switch:

18. Refer to the exhibit. How is a frame sent from PCA forwarded to PCC if the MAC address table on switch SW1 is empty? 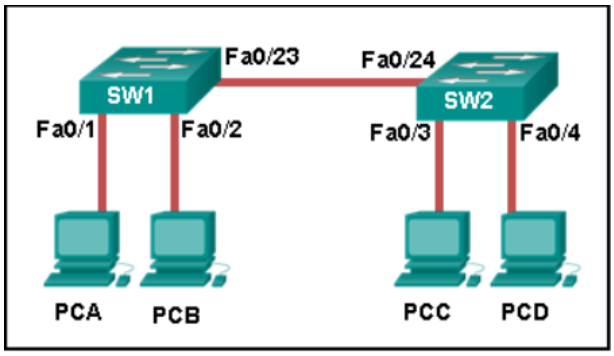 19. What are two actions performed by a Cisco switch? (Choose two.)

Explanation: Important actions that a switch performs are as follows:
– When a frame comes in, the switch examines the Layer 2 source address to build and maintain the Layer 2 MAC address table.
– It examines the Layer 2 destination address to determine how to forward the frame. When the destination address is in the MAC address table, then the frame is sent out a particular port. When the address is unknown, the frame is sent to all ports that have devices connected to that network.

20. Which information does a switch use to populate the MAC address table?

21. How much data can be encapsulated into a normal sized Ethernet frame before it is sent over the network?

Explanation: According to the Ethernet standards, each Ethernet frame can carry 46 to 1500 bytes of user data. During the encapsulation process, other fields are added, such as destination MAC address, source MAC address, and FCS. The size of Ethernet frames is normally limited to a maximum of 1518 bytes and a minimum of 64 bytes.