1. How many bits make up an IPv4 address?

Explanation: An IPv4 address is a 32-bit logical address.

2. Refer to the exhibit. The IP address settings of a host are shown. What is the host number of the IP address? 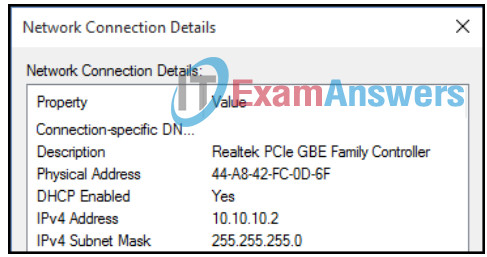 3. When IPv4 is configured for a computer on a network, what does the subnet mask identify?

4. True or False?
Every device on a network needs an IP address to identify itself and communicate on the network.

5. Refer to the exhibit. What is the network number of the LAN that is shown? 6. What are two reasons a network administrator might want to create subnets? (Choose two.)

Explanation: Two reasons for creating subnets include reduction of overall network traffic and improvement of network performance. Subnets also allow an administrator to implement subnet-based security policies. The number of routers or switches is not affected. Subnets do not simplify network design.

7. What is the purpose of the subnet mask in conjunction with an IP address?

8. A student is helping a friend with a home computer that can no longer access the Internet. Upon investigation, the student discovers that the computer has been assigned the IP address 169.254.100.88. What could cause a computer to get such an IP address?

Explanation: When a PC does not have a static IP address or cannot pick one up from a DHCP server, Windows will automatically assign the PC an IP address using APIPA, that uses the range of addresses 169.254.0.0 to 169.254.255.255.

9. Match each description with an appropriate IP address.

10. What are the three ranges of IP addresses that are reserved for internal private use? (Choose three.)

11. What is one factor increasing the adoption of IPv6 network addresses?

Explanation: Factors that are driving an increase in IPv6 adoption are an increasing internet population, a limited IPv4 address space, issues with NAT and the large number of internet-ready IoT devices.

12. When the IETF began development of IPv6, what was the goal of implementing this technology?

Explanation: IPv6 is designed to be the successor to IPv4. IPv6 has a larger 128 bit address space to provide many more addresses than IPv4.

13. How many binary bits exist within an IPv6 address?

Explanation: There are two rules to help reduce the notation of IPv6 addresses. The first one is to omit any leading 0s (zeros) in any hextet. The second one is that a double colon (::) can replace any single, contiguous string of one or more 16-bit hextets consisting of all zeros, but the double colon (::) can only be used once within an address. If an address has more than one contiguous string of all-0 hextets, the best practice is to use the double colon (::) on the longest string. So, applying the first rule in the IPv6 address we have 2001:db8:0:0:ab00:0:0:0, and applying the second rule results in 2001:db8:0:0:ab00::

16. A DHCP-enabled client PC has just booted. During which two steps will the client PC use broadcast messages when communicating with a DHCP server? (Choose two.)

17. Which DHCPv4 message will a client send to accept an IPv4 address that is offered by a DHCP server?

Explanation: When a DHCP client receives DHCPOFFER messages, it will send a broadcast DHCPREQUEST message for two purposes. First, it indicates to the offering DHCP server that it would like to accept the offer and bind the IP address. Second, it notifies any other responding DHCP servers that their offers are declined.

18. Which statement is true about DHCP operation?​

19. What is the destination IP address when an IPv4 host sends a DHCPDISCOVER message?

Explanation: Because a DHCP client does not have a valid IPv4 address, it must use a broadcast IP address of 255.255.255.255 as the destination address to communicate with the DHCP server. The DHCPDISCOVER message sent by the client is the first message sent in order to make initial contact with a DHCP server.