Cybersecurity is the ongoing effort to protect Internet-connected network systems and all of the data associated with the systems from unauthorized use or harm.

2. What are two objectives of ensuring data integrity? (Choose two.)

The objectives for data integrity include data not being altered during transit and not being changed by unauthorized entities. Authentication and encryption are methods to ensure confidentiality. Data being available all the time is the goal of availability.

3. A web server administrator is configuring access settings to require users to authenticate first before accessing certain web pages. Which requirement of information security is addressed through the configuration?

Confidentiality ensures that data is accessed only by authorized individuals. Authentication will help verify the identity of the individuals.

4. A company is experiencing overwhelming visits to a main web server. The IT department is developing a plan to add a couple more web servers for load balancing and redundancy. Which requirement of information security is addressed by implementing the plan?

Availability ensures that network services are accessible and performing well under all conditions. By load balancing the traffic destined to the main web servers, in times of a huge volume of visits the systems will be well managed and serviced.

5. An employee does something as a company representative with the knowledge of that company and this action is deemed illegal. The company would be legally responsible for this action.
True or False?

This is a bit of a grey area and would also depend on local laws. In many cases, if the employee did something with the knowledge or approval of the company, then the legal responsibility would probably be with the company not the employee. In some areas or situations, both the company and employee could be held legally responsible.

6. What is the main purpose of cyberwarfare?

Cyberwarfare is Internet-based conflict that involves the penetration of the networks and computer systems of other nations. The main purpose of cyberwarfare is to gain advantage over adversaries, whether they are nations or competitors.

7. When describing malware, what is a difference between a virus and a worm? Malware can be classified as follows:

8. What type of attack uses zombies? 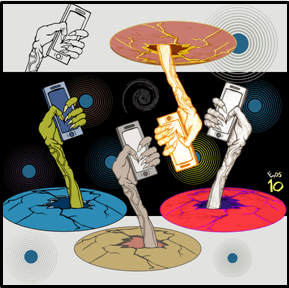 9. The IT department is reporting that a company web server is receiving an abnormally high number of web page requests from different locations simultaneously. Which type of security attack is occurring?

Phishing, spyware, and social engineering are security attacks that collect network and user information. Adware consists, typically, of annoying popup windows. Unlike a DDoS attack, none of these attacks generate large amounts of data traffic that can restrict access to network services.

10. What is the best approach to prevent a compromised IoT device from maliciously accessing data and devices on a local network? The best approach to protect a data network from a possibly compromised IoT device is to place all IoT devices on an isolated network that only has access to the Internet.

11. What is the best method to avoid getting spyware on a machine?

The best method to avoid getting spyware on a user machine is to download software only from trusted websites.

12. What are two security implementations that use biometrics? (Choose two.)

Biometric authentication can be used through the use of a fingerprint, palm print, and facial or voice recognition.

13. Which technology creates a security token that allows a user to log in to a desired web application using credentials from a social media website?

14. A medical office employee sends emails to patients about recent patient visits to the facility. What information would put the privacy of the patients at risk if it was included in the email?

An email message is transmitted in plain text and can be read by anyone who has access to the data while it is en route to a destination. Patient records include confidential or sensitive information that should be transmitted in a secure manner.

15. Which two tools used for incident detection can be used to detect anomalous behavior, to detect command and control traffic, and to detect infected hosts? (Choose two.)

Although each of these tools is useful for securing networks and detecting vulnerabilities, only an IDS and NetFlow logging can be used to detect anomalous behavior, command and control traffic, and infected hosts.

16. For what purpose would a network administrator use the Nmap tool?

Nmap allows an administrator to perform port scanning to probe computers and the network for open ports. This helps the administrator verify that network security policies are in place.

17. Which stage of the kill chain used by attackers focuses on the identification and selection of targets?

It is the first stage, reconnaissance, of the the kill chain that focuses on the identification and selection of targets.

18. What is an example of the a Cyber Kill Chain?

The Cyber Kill Chain describes the phases of a progressive cyberattack operation. The phases include the following:

In general, these phases are carried out in sequence. However, during an attack, several phases can be carried out simultaneously, especially if multiple attackers or groups are involved.

19. What tool is used to lure an attacker so that an administrator can capture, log, and analyze the behavior of the attack?

A honeypot is a tool set up by an administrator to lure an attacker so that the behavior of the attacker can be analyzed. This information can help the administrator identify weaknesses and build a stronger defense.

20. What is one main function of the Cisco Security Incident Response Team? The time between a cyberattack and the time it takes to discover the attack is the time when hackers can get into a network and steal data. An important goal of the CSIRT is to ensure company, system, and data preservation through timely investigations into security incidents.

21. What action will an IDS take upon detection of malicious traffic?

An IDS, or intrusion detection system, is a device that can scan packets and compare them to a set of rules or attack signatures. If the packets match attack signatures, then the IDS can create an alert and log the detection.