1. Which ASDM configuration option is used to configure the ASA enable secret password?

2. Refer to the exhibit. Which Device Setup ASDM menu option would be used to configure the ASA for an NTP server? 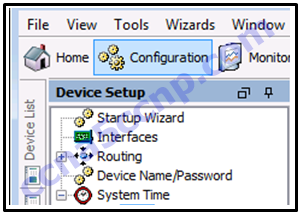 The System Time option is used to manually configure the time zone, date, and time or to configure the system to obtain the date and time from an NTP server.​

3. True or False?
The ASA can be configured through ASDM as a DHCP server.

Use the Device Management configuration option to select DHCP and configure DHCP inside and outside settings.​

4. Which ASDM interface option would be used to configure an ASA as a DHCP server for local corporate devices?

ASDM supports DHCP server and relay settings. From the DHCP Server menu option, select the inside interface and enable the DHCP server option to provide addresses for devices attached through the inside ASA interface. The DMZ commonly contains servers that have statically assigned IP addresses. The outside interface connects to the WAN and would not have devices that would use corporate-provided DHCP.

5. When ASDM is used to configure an ASA site-to-site VPN, what can be customized to secure traffic?

When selected traffic is being secured during ASDM site-to-site VPN configuration, both IKE and ISAKMP parameters can be set. The authentication options are a preshared key or the use of a digital certificate.

6. Which VPN solution allows the use of a web browser to establish a secure, remote-access VPN tunnel to the ASA?

When a web browser is used to securely access the corporate network, the browser must use a secure version of HTTP to provide SSL encryption. A VPN client is not required to be installed on the remote host, so a clientless SSL connection is used.

7. What must be configured on an ASA before it can be accessed by ASDM?

Before an ASA can be accessed using ASDM, the ASA must have access permissions and the ASA web server enabled. Furthermore, a management interface must be configured. On an ASA 5505, a logical VLAN interface and Ethernet port other than 0/0 must be configured. All other ASAs must have a dedicated Layer 3 management interface that is assigned an IP address and appropriate security level.

8. How is an ASA interface configured as an outside interface when using ASDM?

To configure an ASA interface using ASDM, select the desired interface and click Add. In the Interface Name textbox, enter outside. Assign the security level, IP address, and subnet mask. Do not forget to enable the Enable Interface check box.​​

9. Refer to the exhibit. Which Device Management menu item would be used to access the ASA command line from within Cisco ASDM? 10. Which remote-access VPN connection allows the user to connect by using a web browser?

When a web browser is used to securely access the corporate network, the browser must use a secure version of HTTP to provide SSL encryption. A VPN client is not required to be installed on the remote host, so a clientless SSL connection is used.

11. Which ASDM configuration option re-encrypts all shared keys and passwords on an ASA?

The master passphrase is used to reversibly encrypt shared keys and passwords. ​

12. Which type of encryption is applied to shared keys and passwords when the master passphrase option is enabled through ASDM for an ASA?

The master passphrase is used to reversibly encrypt shared keys and passwords. Once enabled, AES encryption is used for the password encryption.​

13. Which statement describes the function provided to a network administrator who uses the Cisco Adaptive Security Device Manager (ASDM) GUI that runs as a Java Web Start application?

Cisco Adaptive Security Device Manager (ASDM) is a Java-based GUI tool that facilitates the management of Cisco ASAs. Cisco ASDM can be used to manage multiple ASAs that run the same ASDM version. ASDM can be run as a Java Web Start application that allows an administrator to configure and monitor that ASA device. Otherwise ASDM can also be downloaded from flash and installed locally on a host as an application; which allows an administrator to use ASDM (local application) to manage multiple ASA devices.

14. What is one benefit of using ASDM compared to using the CLI to configure the Cisco ASA?

Cisco ASDM facilitates configuration of Cisco ASAs because it hides the complexity of the configuration commands. The ASA is required to have a minimum configuration before accessing the ASDM. ASDM is accessed using a web browser connection or local application which provides no more security than being consoled into the device.

15. Which type of security is required for initial access to the Cisco ASDM by using the local application option?

16. Which minimum configuration is required on most ASAs before ASDM can be used?

17. When the CLI is used to configure an ISR for a site-to-site VPN connection, which two items must be specified to enable a crypto map policy? (Choose two.)

After the crypto map command in global configuration mode has been issued, the new crypto map will remain disabled until a peer and a valid access list have been configured.

18. What is the purpose of the ACL in the configuration of an ISR site-to-site VPN connection?

An ACL is used in the ISR configuration of a site-to-site VPN connection to define traffic that will be permitted. This traffic is referred to as interesting traffic.

Authentication on an ASA 5505 device can be accomplished by using a AAA server and indicating the location of the server. Alternatively, a local database can be used by entering the appropriate username and password.​

The clientless SSL VPN uses a web browser for access and uses a set of URLs that are configured to be used with the web portal.

22. What occurs when a user logs out of the web portal on a clientless SSL VPN connection?

When a user logs out, he or she loses access to the VPN. The user does receive a message advising to clear the browser cache, delete the downloaded files, and close the browser window for added security. If the user does not log out, the connection will eventually time out.

23. If an outside host does not have the Cisco AnyConnect client preinstalled, how would the host gain access to the client image?

24. What is an optional feature that is performed during the Cisco AnyConnect Secure Mobility Client VPN establishment phase?

During the process of establishing a VPN connection, a posture assessment can be performed in order to identify the client operating system, antivirus, antispyware, and firewall software. Once identified, a determination can be made whether remote access is allowed.

Both IPsec and SSL are supported by Cisco AnyConnect.

26. What is the purpose of configuring an IP address pool to be used for client-based SSL VPN connections?