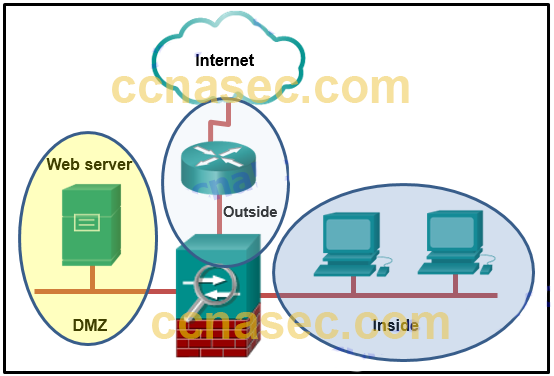 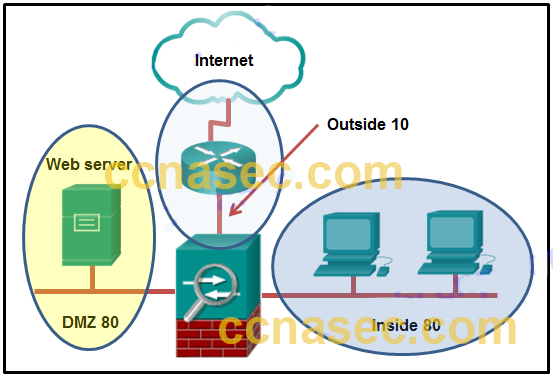 3. What is a difference between ASA IPv4 ACLs and IOS IPv4 ACLs?

There are many similarities between ASA ACLs and IOS ACLs, including:
In both, there is an implicit deny any
Only one ACL per interface, per protocol, per direction still applies.
Both use deny and permit ACEs.
ACLs can be either named or numbered.
ASA ACLs differ from IOS ACLs in that they use a network mask (e.g., 255.255.255.0) instead of a wildcard mask (e.g. 0.0.0.255). Although most ASA ACLs are named, they can also be numbered.

4. What is one of the drawbacks to using transparent mode operation on an ASA device?

In transparent mode the ASA functions like a Layer 2 device. An ASA device can have an IP address assigned on the local network for management purposes. The drawbacks to using transparent mode include no support for dynamic routing protocols, VPNs, QoS, or DHCP Relay.

5. What command defines a DHCP pool that uses the maximum number of DHCP client addresses available on an ASA 5505 that is using the Base license? ASA standard ACLs are used to identify the destination IP addresses, unlike IOS ACLs where a standard ACL identifies the source host/network. They are typically only used for OSPF routes and can be used in a route map for OSPF redistribution. Standard access lists cannot be applied to interfaces to control traffic.

8. What is a characteristic of ASA security levels?

9. What must be configured on a Cisco ASA device to support local authentication?

An ASA can be configured to authenticate by using a local user database or an external server, or both. Local authentication on a Cisco ASA requires the configuration of AAA on the ASA.

The ASA CLI is a proprietary OS which has a similar look and feel to the Cisco router IOS. Although it shares some common features with the router IOS, it has its unique features. For example, an ASA CLI command can be executed regardless of the current configuration mode prompt. The IOS do command is not required or recognized. Both the ASA CLI and the router CLI use the # symbol to indicate the EXEC mode. Both CLIs use the Tab key to complete a partially typed command. Different from the router IOS, the ASA provides a help command that provides a brief command description and syntax for certain commands.

11. What are two factory default configurations on an ASA 5505? (Choose two.)

The ASA 5505 ships with a default configuration that includes the following:
VLAN 1 – for the inside network with security level 100.
VLAN 2 – for the outside network with security level 0 and it should acquire its IP address and default route from an upstream device.
PAT is configured so that inside host addresses are translated using the outside interface IP address.
HTTP access for ASDM is enabled.
DHCP services are provided to the inside hosts. 13. What is the purpose of the webtype ACLs in an ASA?

The webtype ACLs are used in a configuration that supports filtering for clientless SSL VPN users.

14. Refer to the exhibit. A network administrator has configured NAT on an ASA device. What type of NAT is used? 15. Refer to the exhibit. A network administrator is configuring an object group on an ASA device. Which configuration keyword should be used after the object group name SERVICE1?

16. When dynamic NAT on an ASA is being configured, what two parameters must be specified by network objects? (Choose two.)

On an ASA, both the pool of addresses that will be used as inside global address and the range of internal private addresses that should be translated are configured through network objects.

17. What function is performed by the class maps configuration object in the Cisco modular policy framework?

19. What are three characteristics of the ASA routed mode? (Choose three.)

Routed mode is the traditional mode for deploying a firewall where there are two or more interfaces that separate Layer 3 networks. The ASA is considered to be a router hop in the network and can perform NAT between connected networks. Routed mode supports multiple interfaces. Each interface is on a different subnet and requires an IP address on that subnet.

20. Refer to the exhibit. An administrator has configured an ASA 5505 as indicated but is still unable to ping the inside interface from an inside host. What is the cause of this problem? VLAN 1 and VLAN 2 have been configured correctly. Neither e0/0 nor e0/1 have been activated. For an inside host to ping the inside interface would require activating the e0/1 interface.

21. Refer to the exhibit. According to the command output, which three statements are true about the DHCP options entered on the ASA 5505? (Choose three.)

22. Refer to the exhibit. What will be displayed in the output of the show running-config object command after the exhibited configuration commands are entered on an ASA 5505?

24. Which statement describes a feature of AAA in an ASA device?

25. A network administrator is working on the implementation of the Cisco Modular Policy Framework on an ASA device. The administrator issues a clear service-policy command. What is the effect after this command is entered?

26. What is needed to allow specific traffic that is sourced on the outside network of an ASA firewall to reach an internal network?