1. What method can be used by two computers to ensure that packets are not dropped because too much data is being sent too quickly?

Explain:
In order for two computers to be able to communicate effectively, there must be a mechanism that allows both the source and destination to set the timing of the transmission and receipt of data. Flow control allows for this by ensuring that data is not sent too fast for it to be received properly.

2. What type of communication will send a message to all devices on a local area network?

3. What process is used to place one message inside another message for transfer from the source to the destination?

Explain:Encapsulation is the process of placing one message format into another message format. An example is how a packet is placed in its entirety into the data field as it is encapsulated into a frame.

4. A web client is sending a request for a webpage to a web server. From the perspective of the client, what is the correct order of the protocol stack that is used to prepare the request for transmission?

Explain:
1. HTTP governs the way that a web server and client interact.
2. TCP manages individual conversations between web servers and clients.
3. IP is responsible for delivery across the best path to the destination.
4. Ethernet takes the packet from IP and formats it for transmission.

5. Which statement is correct about network protocols?

Explain:
Network protocols are implemented in hardware, or software, or both. They interact with each other within different layers of a protocol stack. Protocols have nothing to do with the installation of the network equipment. Network protocols are required to exchange information between source and destination devices in both local and remote networks.

6. Which statement is true about the TCP/IP and OSI models?

7. What is an advantage of using standards to develop and implement protocols?

9. What are proprietary protocols?

Explain:
Proprietary protocols have their definition and operation controlled by one company or vendor. Some of them can be used by different organizations with permission from the owner. The TCP/IP protocol suite is an open standard, not a proprietary protocol.

10. What is an advantage of network devices using open standard protocols?

Explain:
An advantage of network devices implementing open standard protocols, such as from the TCP/IP suite, is that clients and servers running different operating systems can communicate with each other. Open standard protocols facilitate innovation and competition between vendors and across markets, and can reduce the occurrence of monopolies in networking markets.

11. Refer to the exhibit. If Host1 were to transfer a file to the server, what layers of the TCP/IP model would be used? 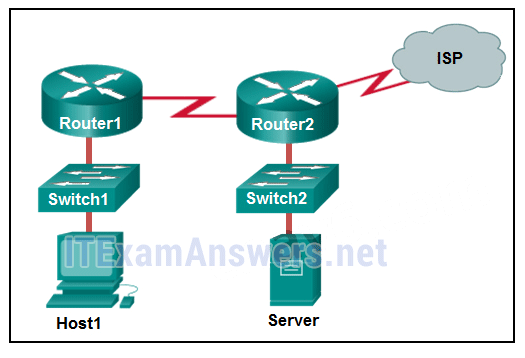 13. At which layer of the OSI model would a logical address be encapsulated?

14. At which layer of the OSI model would a logical address be added during encapsulation?

15. Which PDU format is used when bits are received from the network medium by the NIC of a host?

16. Which PDU is processed when a host computer is de-encapsulating a message at the transport layer of the TCP/IP model?

Explain:
At the transport layer, a host computer will de-encapsulate a segment to reassemble data to an acceptable format by the application layer protocol of the TCP/IP model.

17. Refer to the exhibit. HostA is attempting to contact ServerB. Which two statements correctly describe the addressing that HostA will generate in the process? (Choose two.) 18. Which address does a NIC use when deciding whether to accept a frame?

19. What will happen if the default gateway address is incorrectly configured on a host?

Explain:
When a host needs to send a message to another host located on the same network, it can forward the message directly. However, when a host needs to send a message to a remote network, it must use the router, also known as the default gateway. This is because the data link frame address of the remote destination host cannot be used directly. Instead, the IP packet has to be sent to the router (default gateway) and the router will forward the packet toward its destination. Therefore, if the default gateway is incorrectly configured, the host can communicate with other hosts on the same network, but not with hosts on remote networks.

20. Which characteristic describes the default gateway of a host computer?

Explain:
The default gateway is the IP address of an interface on the router on the same network as the sending host.

21. Match the description to the organization. (Not all options are used.)

ISOC -> The organization promotes the open development, evolution, and use of the internet throughout the world
ISO -> This organization is the largest developer of international standars in the world for a wide variety of products and services. It is know for its Open System Interconection (OSI) reference model.
IANA -> This organization is responsible for overseeing and managing IP address allocation, domain name management, and protocol identifiers

Explain:
The EIA is an international standards and trade organization for electronics organizations. It is best known for its standards related to electrical wiring, connectors, and the 19-inch racks used to mount networking equipment.

22. Match the protocol function to the description while taking into consideration that a network client is visiting a web site. (Not all options are used.)

Place the options in the following order:
governing the way a web server and a web client interact –> application protocol
taking the segments from transport protocol, encapsulating them into packets, and assigning them with appropriate addresses –> internet protocol
preparing packets to be transmitted over the network media –> network access protocol
– not scored –
managing the individual conversations between web servers and web clients –> transport protocol


Explain:
When a web client visits a web server, several network communication protocols are involved. These different protocols work together to ensure that the messages are received and understood by both parties. These protocols include the following:
Application Protocol – governing the way a web server and a web client interact
Transport Protocol – managing the individual conversations between web servers and web clients
Internet Protocol – taking the formatted segments from the transport protocol, encapsulating them into packets, assigning them the appropriate addresses, and delivering them across the best path to the destination host
Network Access Protocol – preparing packets to be transmitted over the network media
Network Time Protocol is used to synchronize clocks between computer systems. It is not involved in this case.

23. Match each description to its corresponding term. (Not all options are used.)

24. A computer in a given network is communicating with a specific group of computers. What type of communication is this?

25. Which protocol is responsible for controlling the size and rate of the HTTP messages exchanged between server and client?

26. A user is viewing an HTML document located on a web server. What protocol segments the messages and manages the segments in the individual conversation between the web server and the web client?

27. Which IEEE standard enables a wireless NIC to connect to a wireless AP that is made by a different manufacturer?

29. What is a benefit of using a layered model for network communications?

30. What is the general term that is used to describe a piece of data at any layer of a networking model?

31. Which statement accurately describes a TCP/IP encapsulation process when a PC is sending data to the network?

32. What statement describes the function of the Address Resolution Protocol?

33. Which address provides a unique host address for data communications at the internet layer?

34. Which protocol is used by a computer to find the MAC address of the default gateway on an Ethernet network?

35. If the default gateway is configured incorrectly on the host, what is the impact on communications?

36. Open the PT Activity. Perform the tasks in the activity instructions and then answer the question. Based on the configured network, what IP address would PC1 and PC2 use as their default gateway?

37. A user sends an HTTP request to a web server on a remote network. During encapsulation for this request, what information is added to the address field of a frame to indicate the destination?

38. Refer to the exhibit. PC-A and PC-B are both in VLAN 60. PC-A is unable to communicate with PC-B. What is the problem? 39. Which command is used to remove only VLAN 20 from a switch?

What characteristic of electricity is expressed in watts?

What characteristic of electricity is expressed in watts?

I have studied, but still I did go through all the answers. Just wanted to let you know that your doing an awesome job.. Keep it up. And by the way how can I assure that the donations are made directly to you? cause I want to donate.

THANK YOU VERY MUCH :*

So these are not the questions that are collected from official Cisco CCNA certification exam? But from the exams after each chapter on Cisco CCNA training? Correct me if I’m wrong.

How many questions does this exam actually have, why did you add “other questions” starting from question 24?

it is very useful to pass &get good marks

Thank you so much for this website members.this site is very much helpful while attempting the exams.i love this site,please continue…

Hello.
Excellent job. But in Question 16 (Host A and Server B) the correct answers are ( i suppose):

this is a very good idea, i like it

You the man. This is awesome