1. Which QoS mechanism allows delay-sensitive data, such as voice, to be sent first before packets in other queues are sent?

2. Which QoS technique retains excess packets in a separate queue for later transmission?

Explanation: As network traffic exits an interface it is queued and then shaped to smooth out the packet output rate. Classification and marking should occur early on to identify traffic and classify how the traffic should be treated.

3. What term describes adding a value to the packet header, as close to the source as possible, so that the packet matches a defined policy?

4. What is a characteristic of the distribution layer in the three layer hierarchical model?

5. Which two methods help to prevent the disruption of network services? (Choose two.)

Explanation: Using duplicate equipment and using redundant paths are two methods to help prevent network disruptions. The use of VLANs would not affect network availability. Changing the routing protocol could actually reduce availability during convergence. Loops, which are created by the provision of redundant paths, are managed by protocols without removing devices.

6. Which technology provides laptops the ability to function on a cellular network?

7. Which two types of devices are specific to WAN environments and are not found on a LAN? (Choose two.)

10. Refer to the exhibit. What has to be done in order to complete the static NAT configuration on R1? 11. Refer to the exhibit. R1 is configured for static NAT. What IP address will Internet hosts use to reach PC1?

12. A network administrator is troubleshooting the dynamic NAT that is configured on router R2. Which command can the administrator use to see the total number of active NAT translations and the number of addresses that are allocated from the NAT pool?

13. What is correct in relation to NAT for IPv6?

Explanation: Refer to curriculum topic: 9.2.5
NAT for IPv6 is a temporary measure to aid in the move from IPv4 to IPv6. NAT64 is replacing NAT-PT. Dual stack is a method for running IPv4 and IPv6 on the same network.

14. Which three statements are generally considered to be best practices in the placement of ACLs? (Choose three.)

Explanation: Extended ACLs should be placed as close as possible to the source IP address, so that traffic that needs to be filtered does not cross the network and use network resources. Because standard ACLs do not specify a destination address, they should be placed as close to the destination as possible. Placing a standard ACL close to the source may have the effect of filtering all traffic, and limiting services to other hosts. Filtering unwanted traffic before it enters low-bandwidth links preserves bandwidth and supports network functionality. Decisions on placing ACLs inbound or outbound are dependent on the requirements to be met.

The destination in this example is printer VLAN 12 which has router R1 Gigabit subinterface 0/1/.12 as its gateway. A sample standard ACL that only allows printing from data VLAN 10 (192.168.10.0/24), for example, and no other VLAN would be as follows:

16. If a router has two interfaces and is routing both IPv4 and IPv6 traffic, how many ACLs could be created and applied to it?

Explanation: In calculating how many ACLs can be configured, use the rule of “three Ps”: one ACL per protocol, per direction, per interface. In this case, 2 interfaces x 2 protocols x 2 directions yields 8 possible ACLs.

17. Which type of Hypervisor is implemented when a user with a laptop running the Mac OS installs a Windows virtual OS instance?

Explanation: Type 2 hypervisors, also know as hosted hypervisors, are installed on top of an existing operating system, such as Mac OS, Windows, or Linux.

19. What defines a two-tier spine-leaf topology?

21. Which number represents the most severe level of syslog logging?

Explanation: Syslog levels are numbered 0 through 7, with 0 being the most severe and 7 being the least severe.

22. Which command will backup the configuration that is stored in NVRAM to a TFTP server?

23. Which statement describes a feature of site-to-site VPNs?

24. Which VPN solution allows the use of a web browser to establish a secure, remote-access VPN tunnel to the ASA?

Explanation: When a web browser is used to securely access the corporate network, the browser must use a secure version of HTTP to provide SSL encryption. A VPN client is not required to be installed on the remote host, so a clientless SSL connection is used.

Explanation: Enterprise managed VPNs can be deployed in two configurations:

26. When JSON data format is being used, what characters are used to hold objects?

28. Refer to the exhibit. If the switch reboots and all routers have to re-establish OSPF adjacencies, which routers will become the new DR and BDR?

Explanation: OSPF elections of a DR are based on the following in order of precedence:

29. Refer to the exhibit. A network administrator has configured OSPFv2 on the two Cisco routers as shown. The routers are unable to form a neighbor adjacency. What should be done to fix the problem?

30. What are the two purposes of an OSPF router ID? (Choose two.)

Explanation: OSPF router ID does not contribute to SPF algorithm calculations, nor does it facilitate the transition of the OSPF neighbor state to Full. Although the router ID is contained within OSPF messages when router adjacencies are being established, it has no bearing on the actual convergence process.

31. Which command will a network engineer issue to verify the configured hello and dead timer intervals on a point-to-point WAN link between two routers that are running OSPFv2? 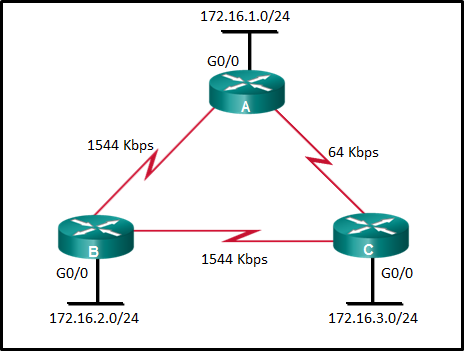 Explanation: The formula used to calculate the OSPF cost is as follows:

33. Refer to the exhibit. Which data format is used to represent the data for network automation applications?

34. A user is reading a book from the website https://www.books-info.com/author1a/book2.html#page100 . Which part of the web link is called a fragment?

35. Refer to the exhibit. Why are routers R1 and R2 not able to establish an OSPF adjacency?

37. Which type of tool would an administrator use to capture packets that are going to and from a particular device?

38. A user reports that the workstation cannot connect to a networked printer in the office in order to print a report created with word processing software. Which troubleshooting action by the helpdesk technician would follow the divide-and-conquer approach?

39. Match the OSPF state with the order in which it occurs. (Not all options are used.) 40. When an OSPF network is converged and no network topology change has been detected by a router, how often will LSU packets be sent to neighboring routers?

Explanation: After all LSRs have been satisfied for a given router, the adjacent routers are considered synchronized and in a full state. Updates (LSUs) are sent to neighbors only under the following conditions:

41. Which type of OSPFv2 packet contains an abbreviated list of the LSDB of a sending router and is used by receiving routers to check against the local LSDB?

Explanation: The database description (DBD) packet contains an abbreviated list of the LSDB sent by a neighboring router and is used by receiving routers to check against the local LSDB.

42. Which step in the link-state routing process is described by a router building a link-state database based on received LSAs?

43. Refer to the exhibit. A network administrator has configured ACL 9 as shown. Users on the 172.31.1.0 /24 network cannot forward traffic through router CiscoVille. What is the most likely cause of the traffic failure?

44. A technician is tasked with using ACLs to secure a router. When would the technician use the access-class 20 in configuration option or command?

45. Refer to the exhibit. A network administrator is configuring a standard IPv4 ACL. What is the effect after the command no access-list 10 is entered?

Explanation: The R1(config)# no access-list <access-list number> command removes the ACL from the running-config immediately. However, to disable an ACL on an interface, the command R1(config-if)# no ip access-group should be entered.

Explanation: Administrative access over SSH to the router is through the vty lines. Therefore, the ACL must be applied to those lines in the inbound direction. This is accomplished by entering line configuration mode and issuing the access-class command.

47. Refer to the exhibit. The network administrator that has the IP address of 10.0.70.23/25 needs to have access to the corporate FTP server (10.0.54.5/28). The FTP server is also a web server that is accessible to all internal employees on networks within the 10.x.x.x address. No other traffic should be allowed to this server. 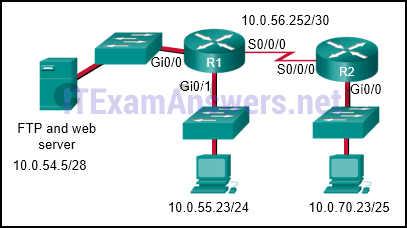 Which extended ACL would be used to filter this traffic, and how would this ACL be applied? (Choose two.)

Explanation: An advantage of an intrusion prevention systems (IPS) is that it can identify and stop malicious packets. However, because an IPS is deployed inline, it can add latency to the network.

49. Which type of security threat can be described as software that attaches itself to another program to execute a specific unwanted function?

Explanation: Viruses can be malicious and destructive or simply change something about the computer, such as words or images, and not necessarily cause thecomputer to malfunction. Viruses can be spread through shared media such as CDs or memory sticks, but can also be delivered via the Internet and email.

50. What is the significant characteristic of worm malware?

Explanation: Worm malware can execute and copy itself without being triggered by a host program. It is a significant network and Internet security threat.

51. What is the best description of Trojan horse malware?

52. What is the function of ASICs in a multilayer switch?

53. What is the port density of a switch?

54. What is a difference between the functions of Cloud computing and virtualization?

55. Why would a network administrator use the config-register 0x2102 command on a Cisco network device?

Refer to the exhibit. The network administrator that has the IP address of 10.0.70.23/25 needs to have access to the corporate FTP server (10.0.54.5/28). The FTP server is also a web server that is accessible to all internal employees on networks within the 10.x.x.x address. No other traffic should be allowed to this server. Which extended ACL would be used to filter this traffic, and how would this ACL be applied? (Choose two.)