1. What command can a technician use on a computer to see if DNS is functioning properly?

Explanation: The nslookup command can be used to test DNS functionality.

2. Which two OSI model layers have the same functionality as two layers of the TCP/IP model? (Choose two.)

5. What will a host on an Ethernet network do if it receives a frame with a unicast destination MAC address that does not match its own MAC address?

6. What is the common term given to SNMP log messages that are generated by network devices and sent to the SNMP server?

Explanation: Network devices being monitored by the SNMP protocol can be configured to generate log messages that are sent to an SNMP server. The log messages, also called traps, contain all type of information from simple status reports to complex urgent conditions that require immediate attention.

7. What is the function of the Nslookup utility?

Explanation: Nslookup is a command-line utility that is used to send a query to DNS servers to resolve a specific host name to an IP address.

Explanation: The multicast MAC address is a special value that begins with 01-00-5E in hexadecimal. It allows a source device to send a packet to a group of devices.

9. Refer to the exhibit. The PC is sending a packet to the Server on the remote network. Router R1 is performing NAT overload. From the perspective of the PC, match the NAT address type with the correct IP address. (Not all options are used.) 10. Match the OSI layer to the layer number. (Not all options are used.) 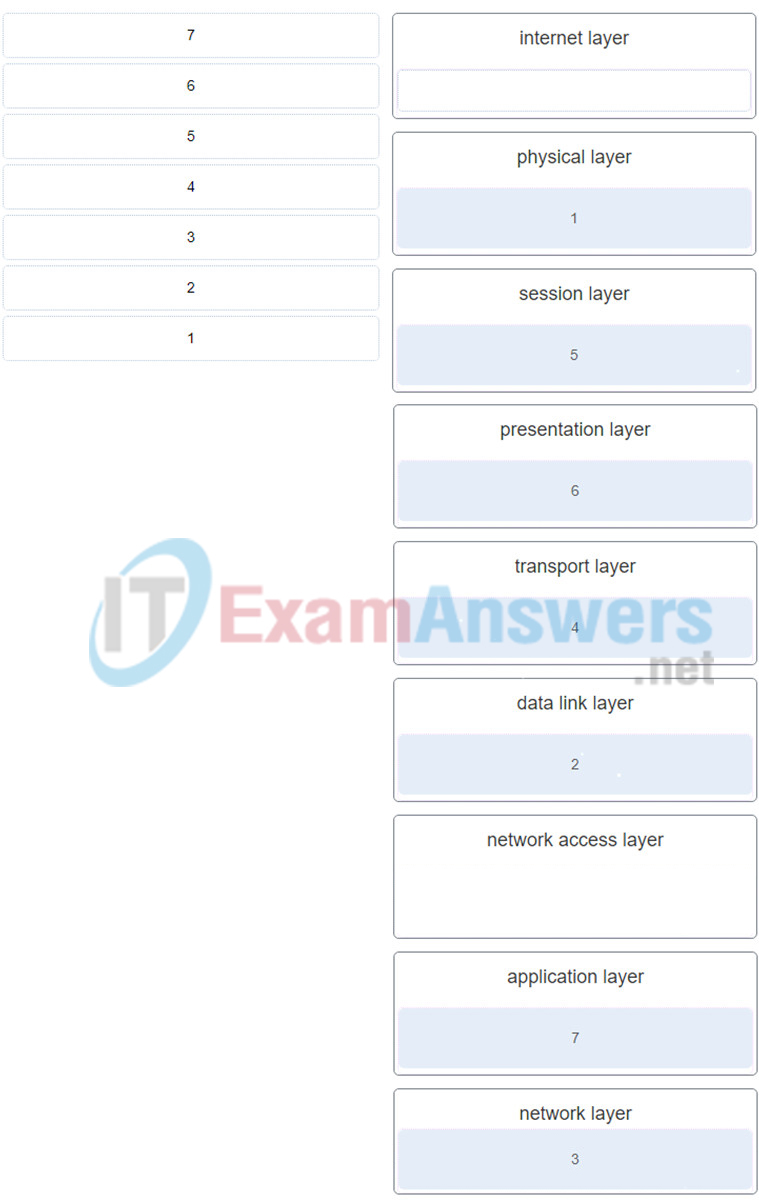 11. A high school in New York (school A) is using videoconferencing technology to establish student interactions with another high school (school B) in Russia. The videoconferencing is conducted between two end devices through the Internet. The network administrator of school A configures the end device with the IP address 209.165.201.10. The administrator sends a request for the IP address for the end device in school B and the response is 192.168.25.10. Neither school is using a VPN. The administrator knows immediately that this IP will not work. Why?

Explanation: The IP address 192.168.25.10 is an IPv4 private address. This address will not be routed over the Internet, so school A will not be able to reach school B. Because the address is a private one, it can be used freely on an internal network. As long as no two devices on the internal network are assigned the same private IP, there is no IP conflict issue. Devices that are assigned a private IP will need to use NAT in order to communicate over the Internet.

What is the significance of the Serial0/0/0?

Explanation: The Serial0/0/0 indicates the outgoing interface on R1 that is used to send packets for the 10.1.1.0/24 destination network.

Explanation: An IPv6 address comprises 128 bits represented as eight blocks of four hexadecimal digits. The last four blocks of the address represent the interface ID and is controlled by the administrator.

15. In what two situations would UDP be the preferred transport protocol over TCP? (Choose two.)

16. Refer to the exhibit. A computer that is configured with the IPv4 address as shown in the exhibit is unable to access the internet. What is the problem?​ 17. Match the Layer 2 frame field names to the correctly ordered locations for an Ethernet frame. Fields should be ordered from the beginning of the Ethernet frame to the end. 18. What IPv4-related DNS record type is used by a DNS server in response to a host requesting for a web server address via the URL?

19. In what two situations would UDP be better than TCP as the preferred transport protocol? (Choose two.)

In what two situations would UDP be the preferred transport protocol over TCP? (Choose two.)