1. What is an example of a closed-loop control system?

2. True or False?
The purpose of the Cisco IoT System is to create complexity in IoT system implementation and management.

Explanation: The Cisco IoT System reduces the complexities of digitization for industry. IoT implementation and management are two components of the digitization process.

3. What are three components of a control system? (Choose three.)

Explanation: Data can travel longer distances on fiber optic cables, and the cables can support higher bandwidths than can copper cables. Using fiber optic cables, the sending device transmits the binary bits as light pulses using LEDs or lasers. The receiving device uses photodiodes to detect the light pulses and convert them to voltages. Fiber optic links are typical point-to-point links and they are more expensive than copper cables.

5. To answer the question, you do not need to consider the exhibit. Which type of media would use electromagnetic signals to communicate between IoT devices? Explanation: Wireless media are commonly used to connect previously unconnected devices to a network. Wireless connectivity methods include the use of electromagnetic signals, radio and microwave frequencies, and satellite links.

6. Which level of the Internet of Things reference model describes data storage?

7. What are two benefits of using a layered model for network protocol development? (Choose two.)

Explanation: There are many benefits of using a layered model to explain network protocols and operations, including: (1) assisting in protocol design; (2) fostering competition because products from different vendors can work together; (3) preventing technology or capability changes in one layer from affecting other layers; and (4) providing a common language to describe networking functions and capabilities.

8. What are three machine-intelligible message structures that group strings of bits for network transmission? (Choose three.)

Explanation: Long stings of bits must be transmitted in groups. These machine-intelligible message structures are frames, packets, and segments. ASCII codes are groups of bits that represent characters and text. Pixels are tiny parts of a larger image, and waveforms are depictions of various kinds of signals, including sounds.

9. What are two factors that impact network security in the IoT? (Choose two.)

Explanation: Network security is a challenge in the IoT. Some of the factors that impact security are as follows:

10. What are three types of connections in an IoT system? (Choose three.)

Explanation: There are multiple meanings of the word “connection” when describing IoT systems, including (1) devices that must be connected to some source of power, such as batteries or AC/DC power; (2) the fact that all IoT devices have circuitry interconnecting sensors, actuators, and controllers together; and (3) that IoT devices have networking links at Layer 2 and Layer 3 of the OSI model.

11. Match the layers of the TCP/IP model to their function. (Not all options are used.)

12. Match the functions with the IoT device.

13. What type of IoT device is the Raspberry Pi?

Explanation: The Raspberry Pi is a powerful controller. It can collect and process a large amount of data. It can also connect to the network to send information to network connected devices.

14. What is embedded within a digital object, such as a photograph or email?

Explanation: Metadata is data about data. A picture can contain GPS location and timestamp data embedded within it. An email can include a point of origin and all SMTP servers along the delivery pathway.

15. To answer the question, you do not need to consider the exhibit. Which type of IoT device operates in the device-to-network-to-cloud communication model? 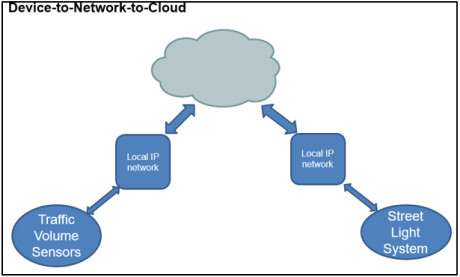 Explanation: Some smart devices, such as watches or fitness trackers, are not IP-enabled and cannot connect directly to the fog or cloud. These devices use application software operating on a local gateway device as an intermediary between the device and the cloud service.

16. What is the term for the extension of the existing Internet structure to billions of connected devices?

Explanation: The Internet of Things (IoT) refers to the interconnection of billions of things, or “smart dust.” SCADA refers to a type of IoT system applied to the industrial Internet. Digitization has several meanings. It can refer to the process of converting analog to digital, or it can refer to the process by which an organization modernizes by planning and ultimately building, a sophisticated and forward-thinking IT network ecosystem that will allow for greater connectivity, productivity, and security. Finally, M2M refers to communication from machine to machine.

18. Which action is the result of negative feedback?

Explanation: Negative feedback tends to move a system toward stabilization and equilibrium. A thermostat monitors and maintains room temperature in the summer by activating and deactivating an air conditioning unit. Chemical reactions that lead to explosions or unpleasant noises that are caused by audio signal feedback are examples of positive feedback. A flashlight used by a camper does not involve system feedback.

19. Fill in the blank.
In process control theory, a _____ uses inputs to execute the required actions in order to achieve the desired output.