1. Match the term to the value represented. 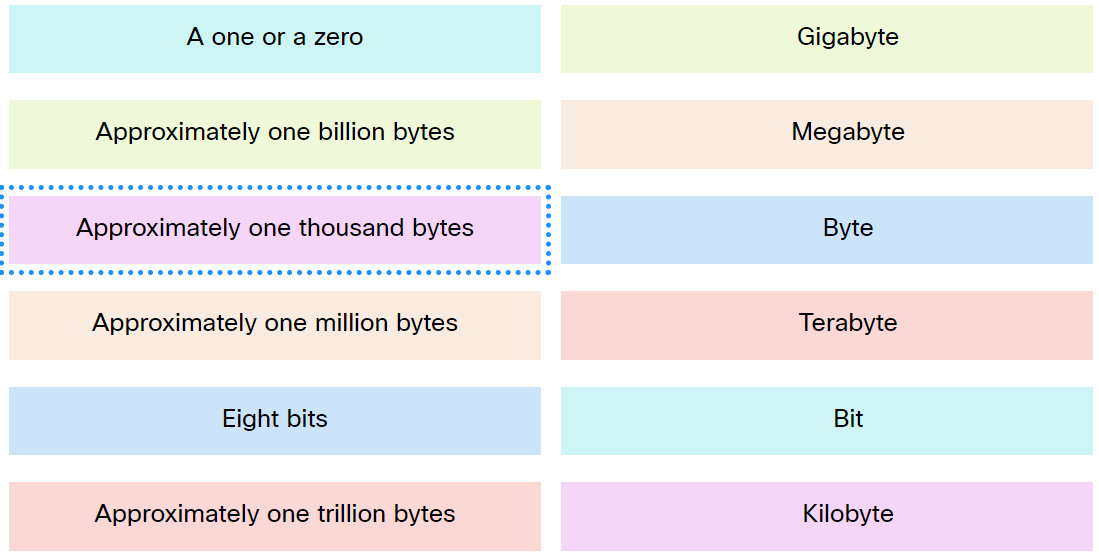 2. What is a disadvantage of deploying a peer-to-peer network model?

3. Which factor classifies a host as a server?

Explanation: A server is a host with server software installed. Although CPU, memory, and the network connection will determine the performance of a server, it is the server software that provides desired server services.

4. Which term is used to describe a network device that relies on another device to obtain information?

Explanation: A client device has software installed which enables it to request the required service from a server device. For instance, a user who uses a web browser is effectively requesting pages from servers all over the web. In this case the browser is considered the client, whereas the device that is responsible for answering the request is considered the server.

5. How many unique values are possible using a single binary digit?

6. Which network device is used to translate a domain name to the associated IP address?

7. A consumer places a smartphone close to a pay terminal at a store and the shopping charge is successfully paid. Which type of wireless technology was used?

Explanation: NFC is a wireless technology that allows data to be exchanged between devices that are in very close proximity to each other.

8. A wireless network was recently installed in a coffee shop and customer mobile devices are not receiving network configuration information. What should be done to correct the problem?

Explanation: End-user devices can request an address from a pool of addresses that are maintained by a DHCP server.

9. A user is looking for a wireless headphone for listening to songs stored on a smartphone. What wireless technology would the headphone use?

Explanation: Bluetooth is a wireless technology for data exchange over a short distance. It is suitable for connecting devices with simple tasks, such as headsets, keyboards, mice, and printers. Wi-Fi is suitable for variety of applications with high speed wireless connectivity required or preferred. Infrared requires a direct line of sight between the transmitter and the receiver. 3G/4G are cellular network technologies to manage voice calls and data transmission between clients and service providers.

10. If you were drawing a physical topology of your school network, what type of information would you include?

Explanation: A physical topology is a diagram that shows where all the devices are physically located in the building.

11. Refer to the exhibit. A student is creating a wired and wireless network in Packet Tracer. After inserting a router, switch, and PC, the student chooses a straight-through cable to connect the PC to the switch. Which connection would be the best port for the student to choose on the PC? 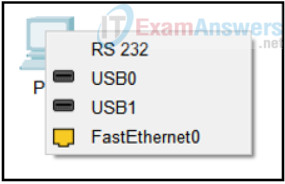 Explanation: A PC to switch connection is through an Ethernet cable. Connect FastEthernet0 on the PC to any Ethernet port on the switch.

12. Refer to the exhibit. An instructor wants to show a few prebuilt Packet Tracer sample labs in class. Which menu option would the instructor use to access a sample lab?

Explanation: Use the File > Open Samples menu option to browse for the samples provided with Packet Tracer.

13. Refer to the exhibit. A home wireless network is being configured within Packet Tracer. The user adds a wireless router, a PC, and three laptops. The user is reviewing the wireless connection on one of the laptops. What can be determined? 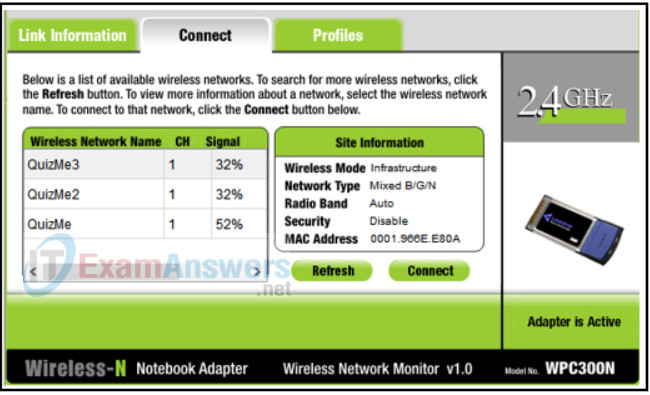 14. When authenticating within Packet Tracer, which two items could you use? (Choose two.)

Explanation: When Packet Tracer first opens, an authentication screen appears. Use the email address in the NetAcad profile or a username associated with NetAcad.

15. Refer to the exhibit. Which menu item would be used to bring up a command prompt environment to be able to ping another network device?

Explanation: The Desktop menu item is used to access common applications and windows used to configure a device such as the IP address, command prompt, web browser, as well as other apps.

16. What are two advantages of using fiber-optic cabling to interconnect devices? (Choose two.)

Explanation: Fiber-optic cables provide immunity to both EMI and RFI and a single cable can extend for several miles before regeneration is needed.

17. Which type of network cable is commonly used to connect office computers to the local network?

Explanation: Twisted-pair is a type of copper cable used to interconnect devices on a local network.

18. Which statement describes the use of the ping command?

19. Which type of network cable is used to connect the components that make up satellite communication systems?

Explanation: Coaxial cable is commonly used to connect the various components that make up satellite communication systems and cable TV.

20. What are two sources of electromagnetic interference that can affect data transmissions? (Choose two.)

Explanation: Electromagnetic interference or EMI is commonly caused by equipment such as microwave ovens and fluorescent light fixtures.

21. What terms represent the maximum and actual speed that can be utilized by a device to transfer data?

Explanation: Bandwidth measures the maximum rate at which a device can transfer data. However, in practice, the actual speed for data transfer could be reduced because of numerous factors like network congestion, overhead etc. This actual rate of transfer is known as throughput.

22. Which type of network component can be used to share an attached printer to the network?

Explanation: A peripheral is a device that is not directly connected to a network. In order to be made available on a network, a host is responsible for sharing the peripheral across the network.

23. Refer to the exhibit. A student has started a Packet Tracer network that includes a home wireless router to be used for both wired and wireless devices. The router and laptop have been placed within the logical workspace. The student clicks on the laptop and the window that opens is shown in the exhibit. What is the purpose of the modules on the left? Explanation: Modules on the left can be installed into the shown device, in this case a laptop. Be sure to power the device off before installing any option.

24. Which criterion can be used to select the appropriate type of network media for a network?