All clients have full connectivity to the servers. For the sake of frame diversity, the environment is not entirely realistic. For instance: 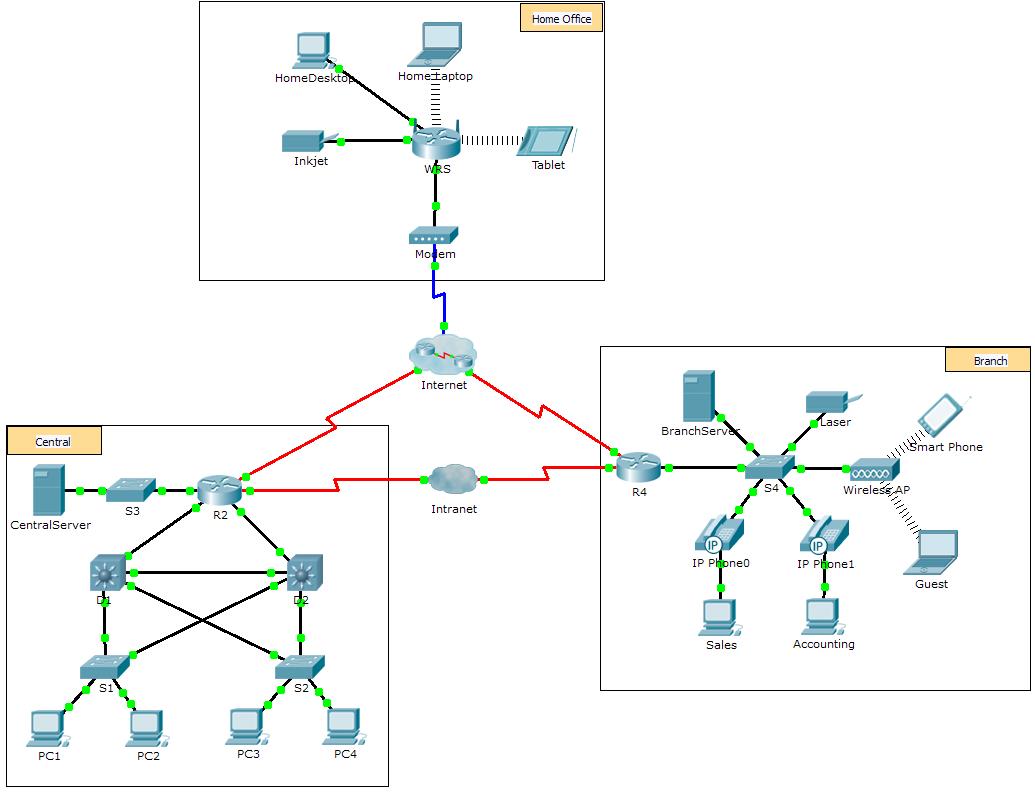 The network model in this activity incorporates many of the technologies that you will master in your CCNA studies. It represents a simplified version of how a small to medium-sized business network might look. Feel free to explore the network on your own. When you are ready, proceed through the following steps and answer the questions.

Note: It is not important that you understand everything you see and do in this activity. Feel free to explore the network on your own. If you wish to proceed more systematically, follow the steps below. Answer the questions to the best of your ability.

Step 1: Identify common components of a network as represented in Packet Tracer.

Step 2: Explain the purpose of the devices.

Regenerate and retransmit data signals; maintain information about what pathways exist through the network and internetwork; notify other devices of errors and communication failures; Direct data along alternate pathways when there is a link failure; Classify and direct messages according to QoS priorities; Permit or deny the flow of data, based on security settings.

The distance the media can successfully carry a signal. The environment in which the media is to be installed. The amount of data and the speed at which it must be transmitted. The cost of the media and installation.

LANs provide access to end users in a small geographical area. A home office or school campus are examples of LANs. WANs provide access to users in a wide geographical area over long distances spanning a few miles to thousands of miles. A Metropolitan Area Network and the Internet are examples of WANs. A company’s intranet may also connect multiple remote sites using a WAN.

There are three, easily identifiable because each has a border and label.

The Internet is mostly used when we need to communicate with a resource on another network. The Internet is a global mesh of interconnected networks (internetworks).

Now that you have had an opportunity to explore the network represented in 1.5.7 Packet Tracer – Network Representation activity, you may have picked up a few skills that you would like to try out. Or maybe you would like the opportunity to explore this network in more detail. Realizing that most of what you see and experience in Packet Tracer is currently beyond your skill level, here are some challenges you might want to attempt. Do not worry if you cannot do them all. You will be a Packet Tracer master user and network designer soon enough.

hello I hope you can help me I see that you have a lot of material I thank you, look I’m next to present my exam in the 200-125 version yet, to which I give more importance of all the versions you have

thanks for your help