1. Which message does an IPv4 host use to reply when it receives a DHCPOFFER message from a DHCP server?

B. When the client receives the DHCPOFFER from the server, it sends back a DHCPREQUEST broadcast message. On receiving the DHCPREQUESTmessage, the server replies with a unicast DHCPACK message.

2. What OSI layer is responsible for establishing a temporary communication session between two applications and ensuring that transmitted data can be reassembled in proper sequence?

B. The transport layer of the OSI model has several responsibilities. One of the primary responsibilities is to segment data into blocks that can be reassembled in proper sequence at the destination device.

3. PC1 and PC3 are on different networks separated by a router, RT1. PC1 issues an ARP request because it needs to send a packet to PC3. In this scenario, what will happen next?

4. What addresses are mapped by ARP?

5. Which statement is true about FTP?

A. FTP is a client/server protocol. FTP requires two connections between the client and the server and uses TCP to provide reliable connections. With FTP, data transfer can happen in either direction. The client can download (pull) data from the server or upload (push) data to the server.

6. Which two OSI model layers have the same functionality as two layers of the TCP/IP model? (Choose two.)

7. Which statement is true about the TCP/IP and OSI models?

10. If the default gateway is configured incorrectly on the host, what is the impact on communications?

11. Which message delivery option is used when all devices need to receive the same message simultaneously?

12. How is a DHCPDISCOVER transmitted on a network to reach a DHCP server?

The DHCPDISCOVER message is sent by a DHCPv4 client and targets a broadcast IP along with the destination port 67. The DHCPv4 server or servers respond to the DHCPv4 clients by targeting port 68.

13. A high school in New York (school A) is using videoconferencing technology to establish student interactions with another high school (school B) in Russia. The videoconferencing is conducted between two end devices through the Internet. The network administrator of school A configures the end device with the IP address 209.165.201.10. The administrator sends a request for the IP address for the end device in school B and the response is 192.168.25.10. Neither school is using a VPN. The administrator knows immediately that this IP will not work. Why?

The IP address 192.168.25.10 is an IPv4 private address. This address will not be routed over the Internet, so school A will not be able to reach school B. Because the address is a private one, it can be used freely on an internal network. As long as no two devices on the internal network are assigned the same private IP, there is no IP conflict issue. Devices that are assigned a private IP will need to use NAT in order to communicate over the Internet.

15. What part of the URL, http://www.cisco.com/index.html, represents the top-level DNS domain?

The components of the URL http://www.cisco.com/index.htm are as follows:
http = protocol
www = part of the server name
cisco = part of the domain name
index = file name
com = the top-level domain 17. Refer to the exhibit. A cybersecurity analyst is viewing captured packets forwarded on switch S1. Which device has the MAC address 50:6a:03:96:71:22? The Wireshark capture is of a DNS query from PC-A to the DNS server. Because the DNS server is on a remote network, the PC will send the query to the default gateway router, router DG, using the MAC address of the router G0/0 interface on the router.

The encapsulation process is performed at each OSI layer and is the process of placing one message format inside another message format.

19. Which PDU format is used when bits are received from the network medium by the NIC of a host? Refer to the exhibit. PC1 issues an ARP request because it needs to send a packet to PC2. In this scenario, what will happen next?

When a network device wants to communicate with another device on the same network, it sends a broadcast ARP request. In this case, the request will contain the IP address of PC2. The destination device (PC2) sends an ARP reply with its MAC address.

23. Which two characteristics are associated with UDP sessions? (Choose two.)

24. Refer to the exhibit. What is the global IPv6 address of the host in uncompressed format?

In the compressed format, the :: represents two contiguous hextets of all zeros. Leading zeros in the second, fifth, and sixth hextets have also been removed.

25. What is the purpose of the routing process?

26. Which application layer protocol uses message types such as GET, PUT, and POST?

27. Which transport layer feature is used to guarantee session establishment?

29. What are two potential network problems that can result from ARP operation? (Choose two.)

Large numbers of ARP broadcast messages could cause momentary data communications delays. Network attackers could manipulate MAC address and IP address mappings in ARP messages with the intent to intercept network traffic. ARP requests and replies cause entries to be made into the ARP table, not the MAC address table. ARP table overflows are very unlikely. Manually configuring static ARP associations is a way to prevent, not facilitate, ARP poisoning and MAC address spoofing. Multiple ARP replies resulting in the switch MAC address table containing entries that match the MAC addresses of connected nodes and are associated with the relevant switch port are required for normal switch frame forwarding operations. It is not an ARP caused network problem.

30. Which TCP mechanism is used to identify missing segments?

31. What is the purpose of ICMP messages?

The purpose of ICMP messages is to provide feedback about issues that are related to the processing of IP packets.

32. What happens if part of an FTP message is not delivered to the destination?

Because FTP uses TCP as its transport layer protocol, sequence and acknowledgment numbers will identify the missing segments, which will be re-sent to complete the message.

33. What is the primary purpose of NAT?

NAT was developed to conserve IPv4 addresses. A side benefit is that NAT adds a small level of security by hiding the internal network addressing scheme. However, there are some drawbacks of using NAT. It does not allow true peer-to-peer communication and it adds latency to outbound connections.

34. Why does a Layer 3 device perform the ANDing process on a destination IP address and subnet mask?

ANDing allows us to identify the network address from the IP address and the network mask. 37. Match the TCP/IP model layer with the function. 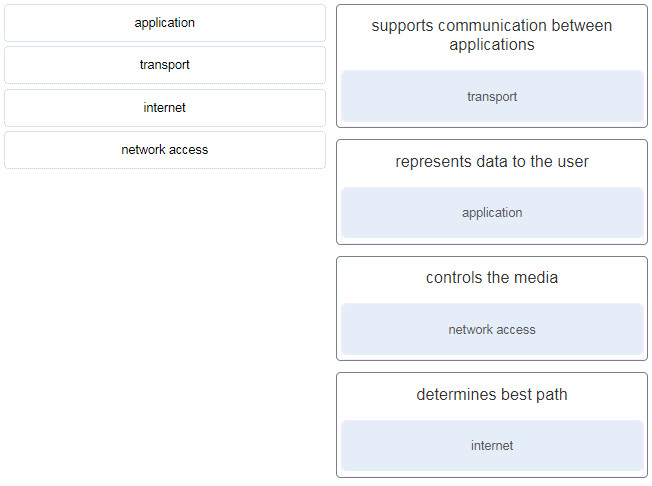 38. Refer to the exhibit. Consider a datagram that originates on the PC and that is destined for the web server. Match the IP addresses and port numbers that are in that datagram to the description. (Not all options are used.) A TCP/IP segment that originated on the PC has 192.168.1.2 as the IP source address. 2578 is the only possible option for the source port number because the PC port number must be in the range of registered ports 1024 to 49151. The destination is the web server, which has the IP address 192.168.2.2, and the destination port number is 80 according to the HTTP protocol standard.

39. Match the compressed IPv6 address representation with the full IPv6 address. (Not all options are used.)