1. What contains information on how hard drive partitions are organized?

2. Which net command is used on a Windows PC to establish a connection to a shared directory on a remote server?

A. The net command is a very important command in Windows. Some common net commands include the following:
net accounts: Sets password and logon requirements for users
net session: Lists or disconnects sessions between a computer and other
computers on the network
net share: Creates, removes, or manages shared resourcesnet start: Starts a network service or lists running network services
net stop: Stops a network service
net use: Connects, disconnects, and displays information about shared
network resources
net view: Shows a list of computers and network devices on the network

3. Which type of startup must be selected for a service that should run each time the computer is booted?

C. An automatic startup will start the service automatically when the PC starts. The manual startup process will occur when the application is launched by a user. There is no boot, start, or startup service type that can be configured.

4. A user creates a file with a .ps1 extension in Windows. What type of file is it?

5. When a user makes changes to the settings of a Windows system, where are these changes stored?

B. The registry contains information about applications, users, hardware, network settings, and file types. The registry also contains a unique section for every user, which contains the settings configured by that particular user.

6. Which Windows version was the first to introduce a 64-bit Windows operating system?

B. There are more than 20 releases and versions of the Windows operating system. The Windows XP release introduced 64-bit processing to Windows computing.

8. Which command is used to manually query a DNS server to resolve a specific hostname?

C. The nslookup command was created to allow a user to manually query a DNS server to resolve a given host name. The ipconfig /displaydns command only displays previously resolved DNS entries. The tracert command was created to examine the path that packets take as they cross a network and can resolve a hostname by automatically querying a DNS server. The net command is used to manage network computers, servers, printers, and network drives.

9. What is the purpose of the cd\ command?

B. CLI commands are typed into the Command Prompt window of the Windows operating system. The cd\ command is used to change the directory to the Windows root directory.

10. How much RAM is addressable by a 32-bit version of Windows?

11. How can a user prevent specific applications from accessing a Windowscomputer over a network?

C. Network applications have specific TCP or UDP ports that can be left open or blocked in Windows Firewall. Disabling automatic IP address assignment may result in the computer not being able to connect to the network at all. Enabling MAC address filtering is not possible in Windows and would only block specific network hosts, not applications. Changing default usernames and passwords will secure the computer from unauthorized users, not from applications.

12. What utility is used to show the system resources consumed by each user?

A. The Windows Task Manager utility includes a Users tab from which the system resources consumed by each user can be displayed.

13. What utility is available on a Windows PC to view current running applications and processes?

On a Windows PC the Task Manager utility can be used to view the applications, processes, and services that are currently running.

14. A user logs in to Windows with a regular user account and attempts to use an application that requires administrative privileges. What can the user do to successfully use the application?

As a security best practice, it is advisable not to log on to Windows using the Administrator account or an account with administrative privileges. When it is necessary to run or install software that requires the privileges of the Administrator, the user can right-click the software in the Windows File Explorer and choose Run as Administrator.

Traceroute (tracert) is a utility that generates a list of hops that were successfully reached along the path from source to destination.This list can provide important verification and troubleshooting information. The ipconfig utility is used to display the IP configuration settings on a Windows PC. The Netstat utility is used to identify which active TCP connections are open and running on a networked host. Nslookup is a utility that allows the user to manually query the name servers to resolve a given host name. This utility can also be used to troubleshoot name resolution issues and to verify the current status of the name servers.

16. Where are the settings that are chosen during the installation process stored?

17. What technology was created to replace the BIOS program on modern personal computer motherboards?

As of 2015, most personal computer motherboards are shipped with UEFI as the replacement for the BIOS program.

18. Which two things can be determined by using the ping command? (Choose two.)

A ping command provides feedback on the time between when an echo request was sent to a remote host and when the echo reply was received. This can be a measure of network performance. A successful ping also indicates that the destination host was reachable through the network.

19. What function is provided by the Windows Task Manager?

Windows Task Manager enables an end user to monitor applications, processes, and services currently running on the end device. It can be used to start or stop programs, stop processes, and display informative statistics about the device.

20. Which type of Windows PowerShell command performs an action and returns an output or object to the next command that will be executed?

21. What would be displayed if the netstat -abno command was entered on a Windows PC?

With the optional switch -abno, the netstat command will display all network connections together with associated running processes. It helps a user identify possible malware connections.

22. Which two commands could be used to check if DNS name resolution is working properly on a Windows PC? (Choose two.)

23. Refer to the exhibit. A cyber security administrator is attempting to view system information from the Windows PowerShell and recieves the error message shown. What action does the administrator need to take to successfully run the command?

Best practices advise not to log into systems with an administrator account, but rather a user account. When logged in as a user it is possible to run Windows utilitites, such as PowerShell and the Command Prompt as an administrator by right clicking on the utility and slecting Run as Administrator.

24. Refer to the exhibit. A cybersecurity analyst is investigating a reported security incident on a Microsoft Windows computer. Which tool is the analyst using? Event Viewer is used to investigate the history of application, security, and system events. Events show the date and time that the event occurred along with the source of the event. If a cybersecurity analyst has the address of the Windows computer targeted and/or the date and time that a security breach occurred, the analyst could use Event Viewer to document and prove what occurred on the computer.

25. For security reasons a network administrator needs to ensure that local computers cannot ping each other. Which settings can accomplish this task?

Smartcard and file system settings do not affect network operation. MAC address settings and filtering may be used to control device network access but cannot be used to filter different data traffic types.

26. Consider the path representation in Windows CLI C:\Users\Jason\Desktop\mydocu.txt. What does the Users\Jason component represent?

27. Which two user accounts are automatically created when a user installs Windows to a new computer? (Choose two.)

When a user installs Windows, two local user accounts are created automatically during the process, administrator and guest.

28. What term is used to describe a logical drive that can be formatted to store data?

Hard disk drives are organized by several physical and logical structures. Partitions are logical portions of the disk that can be formatted to store data. Partitions consist of tracks, sectors, and clusters. Tracks are concentric rings on the disk surface. Tracks are divided into sectors and multiple sectors are combined logically to form clusters

29. What is the purpose of entering the netsh command on a Windows PC?

The netsh.exe tool can be used to configure networking parameters for the PC from a command prompt.

30. A technician is troubleshooting a PC unable to connect to the network. What command should be issued to check the IP address of the device?

The commands tracert and ping are used to test the connectivity of the PC to the network. The command nslookup initiates a query to an Internet domain name server.

31. Refer to the exhibit. Which Microsoft Windows application is being used? 32. What are two reasons for entering the ipconfig command on a Windows PC? (Choose two.)

The command ipconfig is a useful tool for troubleshooting. The command will display some IP addressing configuration and the network media connection status. The command does not test the connection to the DNS server configured or test remote networks. It does not display bandwidth and throughput information.

33. What are two advantages of the NTFS file system compared with FAT32? (Choose two.)

The file system has no control over the speed of access or formatting of drives, and the ease of configuration is not file system-dependent.

34. What is the purpose of using the net accounts command in Windows?

These are some common net commands:
net accounts – sets password and logon requirements for users
net start – starts a network service or lists running network services
net use – connects, disconnects, and displays information about shared network resources
net view – shows a list of computers and network devices on the network
When used without options, the net accounts command displays the current settings for password, logon limitations, and domain information.

36. When restrictive security policy is implemented on a firewall, only certain required ports are opened

37. Match the Windows command to the description. 38. Match the definition to the Microsoft Windows term. (Not all options are used.) 39. Match the definition to the Microsoft Windows term. (Not all options are used.) 40. Match the Windows term to the description. 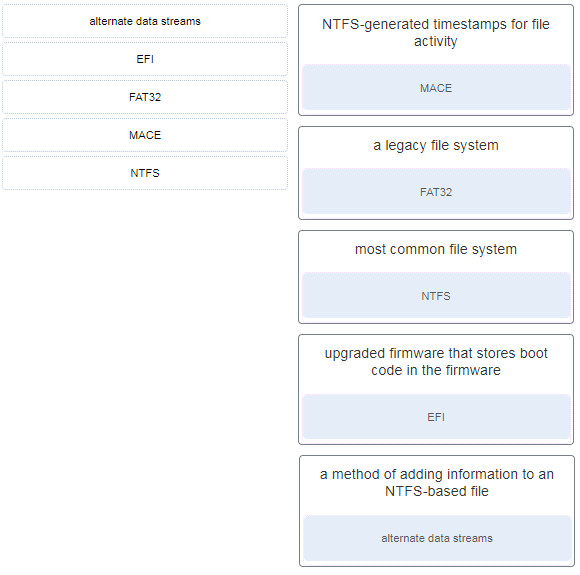 Fill in the blank.
A   is a flaw or weakness in a computer operating system that can be exploited by an attacker. answer= vulnerability

#18 is wrong
18. Which two things can be determined by using the ping command? (Choose two.)

The correct answers are:

When ___________ security policy is implemented on a firewall, only certain required ports are opened. The rest are closed. Answer- restrictive