Protocols are the foundation of data communications. For this reason they have been a target of threat actors for a very long time. Cybersecurity analysts must understand how threat actors use features of common protocols in cyberattacks.

This module provides an overview of the Layer 3 IP packet fields and the Layer 4 TCP and UDP segment fields, and discusses vulnerabilities of each.

IP was designed as a Layer 3 connectionless protocol. It provides the necessary functions to deliver a packet from a source host to a destination host over an interconnected system of networks. The protocol was not designed to track and manage the flow of packets. These functions, if required, are performed primarily by TCP at Layer 4.

IP makes no effort to validate whether the source IP address contained in a packet actually came from that source. For this reason, threat actors can send packets using a spoofed source IP address. In addition, threat actors can tamper with the other fields in the IP header to carry out their attacks. Therefore, it is important for security analysts to understand the different fields in both the IPv4 and IPv6 headers.

The fields in the IPv4 packet header are shown in the figure. Click Play in the figure to view a demonstration of examining IPv4 headers in a Wireshark capture.

There are eight fields in the IPv6 packet header, as shown in the figure. An IPv6 packet may also contain extension headers (EH) that provide optional network layer information. Extension headers are optional and are placed between the IPv6 header and the payload. EHs are used for fragmentation, security, to support mobility, and more.

Unlike IPv4, routers do not fragment routed IPv6 packets.

Click Play in the figure to view a demonstration of examining IPv6 headers in a Wireshark capture.

There are different types of attacks that target IP. The table lists some of the more common IP-related attacks.

ICMP was developed to carry diagnostic messages and to report error conditions when routes, hosts, and ports are unavailable. ICMP messages are generated by devices when a network error or outage occurs. The ping command is a user-generated ICMP message, called an echo request, that is used to verify connectivity to a destination.

Threat actors use ICMP for reconnaissance and scanning attacks. This enables them to launch information-gathering attacks to map out a network topology, discover which hosts are active (reachable), identify the host operating system (OS fingerprinting), and determine the state of a firewall.

Threat actors also use ICMP for DoS and DDoS attacks, as shown in the ICMP flood attack in the figure. 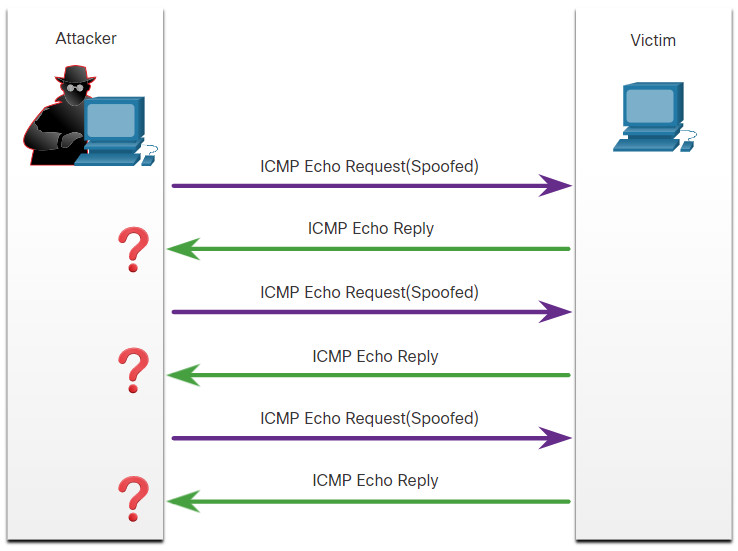 Note: ICMP for IPv4 (ICMPv4) and ICMP for IPv6 (ICMPv6) are susceptible to similar types of attacks.

Networks should have strict ICMP access control list (ACL) filtering on the network edge to avoid ICMP probing from the internet. Security analysts should be able to detect ICMP-related attacks by looking at captured traffic and log files. In the case of large networks, security devices, such as firewalls and intrusion detection systems (IDS), should detect such attacks and generate alerts to the security analysts.

Click Play in the figure to view a video about amplification, reflection, and spoofing attacks. IP address spoofing attacks occur when a threat actor creates packets with false source IP address information to either hide the identity of the sender, or to pose as another legitimate user. The threat actor can then gain access to otherwise inaccessible data or circumvent security configurations. Spoofing is usually incorporated into another attack such as a Smurf attack.

Spoofing attacks can be non-blind or blind:

MAC address spoofing attacks are used when threat actors have access to the internal network. Threat actors alter the MAC address of their host to match another known MAC address of a target host, as shown in the figure. The attacking host then sends a frame throughout the network with the newly-configured MAC address. When the switch receives the frame, it examines the source MAC address. The switch overwrites the current CAM table entry and assigns the MAC address to the new port, as shown in the figure. It then forwards frames destined for the target host to the attacking host. Application or service spoofing is another spoofing example. A threat actor can connect a rogue DHCP server to create an MiTM condition.

While some attacks target IP, this topic discusses attacks that target TCP and UDP.

TCP segment information appears immediately after the IP header. The fields of the TCP segment and the flags for the Control Bits field are displayed in the figure. The following are the six control bits of the TCP segment:

A TCP connection is established in three steps:

The TCP SYN Flood attack exploits the TCP three-way handshake. The figure shows a threat actor continually sending TCP SYN session request packets with a randomly spoofed source IP address to a target. The target device replies with a TCP SYN-ACK packet to the spoofed IP address and waits for a TCP ACK packet. Those responses never arrive. Eventually the target host is overwhelmed with half-open TCP connections, and TCP services are denied to legitimate users. TCP session hijacking is another TCP vulnerability. Although difficult to conduct, a threat actor takes over an already-authenticated host as it communicates with the target. The threat actor must spoof the IP address of one host, predict the next sequence number, and send an ACK to the other host. If successful, the threat actor could send, but not receive, data from the target device.

UDP is commonly used by DNS, DHCP, TFTP, NFS, and SNMP. It is also used with real-time applications such as media streaming or VoIP. UDP is a connectionless transport layer protocol. It has much lower overhead than TCP because it is not connection-oriented and does not offer the sophisticated retransmission, sequencing, and flow control mechanisms that provide reliability. The UDP segment structure, shown in the figure, is much smaller than TCP’s segment structure.

Although UDP is normally called unreliable, in contrast to TCP’s reliability, this does not mean that applications that use UDP are always unreliable, nor does it mean that UDP is an inferior protocol. It means that these functions are not provided by the transport layer protocol and must be implemented elsewhere if required.

The low overhead of UDP makes it very desirable for protocols that make simple request and reply transactions. For example, using TCP for DHCP would introduce unnecessary network traffic. If no response is received, the device resends the request.

UDP is not protected by any encryption. You can add encryption to UDP, but it is not available by default. The lack of encryption means that anyone can see the traffic, change it, and send it on to its destination. Changing the data in the traffic will alter the 16-bit checksum, but the checksum is optional and is not always used. When the checksum is used, the threat actor can create a new checksum based on the new data payload, and then record it in the header as a new checksum. The destination device will find that the checksum matches the data without knowing that the data has been altered. This type of attack is not widely used.

You are more likely to see a UDP flood attack. In a UDP flood attack, all the resources on a network are consumed. The threat actor must use a tool like UDP Unicorn or Low Orbit Ion Cannon. These tools send a flood of UDP packets, often from a spoofed host, to a server on the subnet. The program will sweep through all the known ports trying to find closed ports. This will cause the server to reply with an ICMP port unreachable message. Because there are many closed ports on the server, this creates a lot of traffic on the segment, which uses up most of the bandwidth. The result is very similar to a DoS attack.

IP was designed as a Layer 3 connectionless protocol. The IPv4 header consists of several fields while the IPv6 header contains fewer fields. It is important for security analysts to understand the different fields in both the IPv4 and IPv6 headers.

There are different types of attacks that target IP. Common IP-related attacks include:

The UDP segment (i.e., datagram) is much smaller than the TCP segment, which makes it very desirable for use by protocols that make simple request and reply transactions such as DNS, DHCP, SNMP, and others. Threat actors can conduct UDP flood attacks which sweep through all the known UDP ports on a server trying to find closed ports. This can create a DoS situation.