1. Which DNS resource record is used to resolve a domain name to an IPv6 address?

Explanation: The AAAA RR is used to resolve a domain name to an IPv6 address.

2. Which DNS SPAM management feature uses cryptography by creating a TXT RR that contains the public encryption key of the domain?

Explanation: DKIM uses cryptography by creating a TXT RR that contains the public encryption key of the domain.

3. Which message is broadcasted by a DHCPv4 client to initiate the lease obtaining process?

Explanation: The DHCP client broadcasts a DHCPDISCOVER message to request an IP configuration from a DHCP server.

4. Which message is unicasted by a DHCPv4 server to confirm that the host can use the offered IP configuration?

Explanation: The server removes the IP configuration from its pool of available IP configurations and sends a unicast acknowledgement (DHCPACK) to the DHCP client to confirm that it can use the address until the lease expires.

5. Which two messages are used in the DHCP lease renewal process (Choose two.)?

7. What is the file type that can contain all the installation files for an operating system?

8. Which graphics card is recommended for intense 3D art rendering and video editing?

9. What Windows Deployment Tool would a technician use to deploy applications to multiple computers across a given network?

11. After cables were reconnected to a switch in a wiring closet, several PCs that had been previously configured manually can no longer access resources outside the local network. The PC configurations were not altered in the process and resources on the local network can still be accessed. What is a possible cause of the problem?

Explanation: The PCs have been manually configured and confirmed to be correct, so DHCP and DNS configurations are not factors in this problem. The PCs can still access local resources, so there is not a cabling problem.

12. A technician wants to upgrade several computers to Windows 10 over the network. Which of the following boot methods supports this upgrade method?

Explanation: To be able to install Windows 10 from WDS (Windows Deployment Server) over PXE boot, your WDS server MUST have at least one install and one boot image. The boot image is what you will boot to from the Network while the Install image is the actual OS image you will install. You must also have a DHCP server with a scope configured for PXE.

13. What happens when you are running a game in Windows 10 and have turned on the Gaming mode?

Explanation: When you use Game Mode, Windows prioritizes your gaming experience by turning things off in the background. When you’re running a game, Game Mode:
Prevents Windows Update from performing driver installations and sending restart notifications
Helps achieve a more stable frame rate depending on the specific game and system

14. Refer to the exhibit. Which commands would the technician enter in Windows 10 PowerShell to determine the GUID of the GPT partition displayed?

15. Which statement describes how hosts on VLANs communicate?

Explanation: Traffic cannot pass directly to another VLAN (between broadcast domains) within the switch or between two switches. To interconnect two different VLANs, you must use routers or Layer 3 switches.

16. A technician is trying to upgrade a computer running Windows 10 Pro to Windows 11 Pro. The computer hardware specs are as follows:

During the installation, the following message is displayed “This PC doesn’t currently meet all the system requirements for Windows 11”. What is the most probable reason for this?

17. Where can you configure the recording time in Windows 10 in order to capture your game play?

Explanation: Windows 10 has integrated Game Bar settings. You can use it to adjust the length of recording time by going to Start > Settings > Gaming > Capture.

18. Which Windows 10 security feature helps to reduce the risk of malware exploiting the privileges of the Administrators group?

Explanation: UAC (User Account Control) is a security feature in Windows 10 that prevents unauthorized or inadvertent changes to the operating system. With UAC, apps and tasks always run in the security context of a non-administrator account, unless an administrator specifically authorizes administrator-level access to the system.

19. What is two-factor authentication (2FA)?

Explanation: Two-factor authentication (2FA), sometimes referred to as two-step verification, is a security process in which users provide two different authentication factors to verify themselves.

20. A technician wants to upgrade a user computer to Windows 10 but keep the current settings and files intact during the new installation. Which upgrade method should the technician use?

Explanation: An in-place OS upgrade will start the upgrade setup from the existing OS and keep all the customized configurations and user data, and avoid reinstallation of all the applications and restoration of data.

21. Which security method in Windows 10 uses a single username and password once for multiple applications?

22. A technician is setting up a booth at a company job fair. The technician needs to ensure job seekers can interact with the company application securely and limit all other activities on the laptop. The technician must also ensure that whenever the computer is rebooted or powered on it logs on automatically without a password. Which account type would the technician set up on this kiosk machine to do this?

Explanation: In Windows 10, the Guest account is a particular local user account with very limited permissions. It has the following restrictions:
It doesn’t have a password and passwords cannot be set for it.
It cannot install apps, desktop apps or hardware devices.
It can use only the apps and desktop programs that were installed on your PC or device when the Guest account was enabled.
It cannot change its account type, name or picture.

23. Which two features in Microsoft Windows 10 require a user to input the Windows Hello Pin in order to set them up?

24. Match the resource record type with its use.

26. The acronym for putting out a fire using a fire extinguisher is PASS. What does PASS stand for?

Explanation: The acronym PASS stands for:
P – Pull the pin.
A – Aim at the base of the fire, not at the flames.
S – Squeeze the lever.
S – Sweep the nozzle from side to side.

27. What is the function of the Secure Boot setting in UEFI firmware?

Explanation: UEFI will check the boot loader before launching it and ensure it is signed by Microsoft (only supported by Windows 8 ,10 and 11). If a rootkit or another piece of malware does replace your boot loader or tamper with it, UEFI won’t allow it to boot. This prevents malware from hijacking your boot process and concealing itself from your operating system.

28. When an end device requests services from a DHCPv4 server it receives a host IPv4 address and a subnet mask. Which two other IPv4 addresses are also typically provided to a DCHPv4 client? (Choose two.)

Explanation: LAN NTP server and local HTTP web server addresses are not provided by DHCP. Automatic private IPv4 addresses (APIPA) are used by DHCP clients when the clients fail to connect to a DHCPv4 server.

Explanation: An acceptable user policy (AUP) is an agreement between two or more parties that defines the appropriate user access to resources or services. Before the users are granted access, the users must agree to the AUP and follow the policy outlined in AUP.

30. Match the stages of the procurement lifecycle to the scenarios described. 31. What action must be performed first when disposing of an asset that has reached the end of its lifecycle?

Explanation: When an asset has reached end of life, the asset should be sanitized of any data. The sanitized asset can be sold, recycled, donated, or destroyed. The asset management database should be updated to reflect the change in the status of the asset.

32. What is the reason why the DHCPREQUEST message is sent as a broadcast during the DHCPv4 process?

Explanation: The DHCPREQUEST message is broadcast to inform other DHCP servers that an IP address has been leased.

Explanation: When a host configured to use DHCP powers up on a network it sends a DHCPDISCOVER message. FF-FF-FF-FF-FF-FF is the L2 broadcast address. A DHCP server replies with a unicast DHCPOFFER message back to the host.

34. Match each DHCP message type with its description. (Not all options are used.) 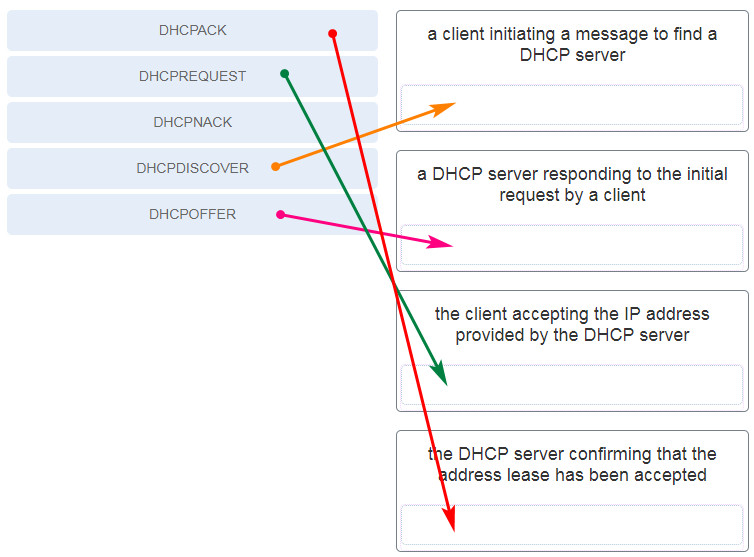 35. What type of information is contained in a DNS MX record?

Explanation: A Mail Exchange (MX) resource record identifies one or more email exchange servers that are responsible for accepting email messages on behalf of a domain name.

36. Match the DHCP message with the port numbers and message types used.

37. Which DNS SPAM Management feature uses an unencrypted RR to identify authorized servers permitted to send emails from the domain?

38. Which type of server keeps a list of domain names and their associated IP address information in resource records (RRs)?

Explanation: A DNS server keeps a list of domain names and IP addresses information in resource records (RRs). This list of RRs is stored on a DNS server in a DNS zone database.

Match the stages of the procurement lifecycle to the scenarios described.

A technician is trying to upgrade a computer running Windows 10 Pro to Windows 11 Pro. The computer hardware specs are as follows:

During the installation, the following message is displayed “This PC doesn’t currently meet all the system requirements for Windows 11”. What is the most probable reason for this?

CORRECT
the Trusted Platform Module should be version 2

Note- While the requirement to upgrade a Windows 10 device to Windows 11 is only that the PC be Secure Boot capable by having UEFI/BIOS enabled, you may also consider enabling or turning Secure Boot on for better security.

Match the DHCP message with the port numbers and message types used.
Place the options in the following order:
[+] DHCPOFFER
[+] DHCPACK
[#] DHCPDISCOVER
[#] DHCPREQUEST