1. What is a good safety precaution to take when opening a computer case?

Explanation: Computer cases can easily be a hazard to technicians. Before working inside a computer, examine the case edges and put tape over any of the sharp edges to prevent physical harm. A case is opened, but seldom removed when installing or removing parts. Loose clothing should be secured before you work inside a computer.

2. What does the “A” in P-A-S-S remind a person to do while using a fire extinguisher?

Explanation: When using the P-A-S-S memory aid with a fire extinguisher, the “A” in P-A-S-S is for aiming at the base of the fire and not at the flames.

3. How is a power supply commonly attached to a tower case?

4. A technician is replacing a power supply. Which two factors should the technician consider when obtaining the replacement part? (Choose two.)

Explanation: A technician should consider the following when choosing a power supply:Type of motherboard
Wattage
Number and type of connectors
Type of case
The computer input power level is either 120 or 240 VAC. Output voltages are standard 3.3, 5, and 12 VDC. A power supply normally has one fan and this is not a selectable option on a fan.

5. A technician is installing additional memory in a computer. How can the technician guarantee that the memory is correctly aligned?

6. What is used to prevent the motherboard from touching metal portions of the computer case?

Explanation: Screws and standoffs that are non-metallic may be insulators and protect against grounding.

7. Which statement describes the purpose of an I/O connector plate?

8. What are three important considerations when installing a CPU on a motherboard? (Choose three.)

Explanation: The CPU is sensitive to static discharges. Its pins are very delicate and it works at high temperatures, so precautions must be taken. If the CPU has been used in another machine or if the fan is being replaced, you might need to remove the old thermal compound using isopropyl alcohol (not on the CPU contacts). The battery does not need to be removed from the motherboard during the CPU installation. This would cause the saved BIOS settings to be lost. Minimum force should be needed to lock the CPU load lever into place.

9. When a new PC is being built, which component has the most influence when selecting the case and power supply?

10. Which two factors must be considered when replacing old RAM modules in a PC? (Choose two.)

Explanation: When the RAM on a motherboard is being replaced or upgraded, the new RAM module must be compatible with the current motherboard. In addition, the speed of the new RAM must be supported by the chipset.

11. Refer to the exhibit. In which section of the motherboard would a memory module be installed? Explanation: Memory modules insert into memory expansion slots that have a retaining clip at each end of the slot.

12. Which type of motherboard expansion slot sends data one bit at a time over a serial bus?

Explanation: A PCIe expansion slot connects to a serial bus that sends data one bit at a time at a much faster rate than the older PCI slot that connects to a parallel bus.

13. Which PC motherboard bus is used to connect the CPU to RAM and other motherboard components?

Explanation: The front-side bus (FSB) is used to connect the CPU to RAM, expansion cards, and other motherboard components. The speed of this bus is relevant when selecting replacement motherboards and RAM.

14. Where is buffered memory commonly used?

Explanation: Buffered memory is used in computers that have a lot of RAM such as servers and high-end workstations. Buffered memory should be avoided in gaming, business, and home computers because it slows the memory speed.

15. A technician has been asked to upgrade a processor and needs to do some research. The computer is just a couple of years old. What are two types of processor packages that could be used inside the computer? (Choose two.)

Explanation: Two architectures used with CPUs today are the pin grid array (PGA) and the land grid array (LGA). The PGA has pins on the bottom of the processor. The LGA has pins within the socket.

16. A student is looking to add memory in order to speed up a tower computer. Which type of memory module should the student be looking for?

Explanation: Motherboards in tower computers accept dual inline memory modules (DIMMs) in the memory expansion slots. A motherboard supports a particular type of DIMM such as a DDR3 or DDR4 module.

18. A technician has been asked to order a replacement internal SATA HDD. Between which two form factors will the technician have to choose? (Choose two.)

19. While shopping for a replacement motherboard, a customer decides to also purchase a new mechanical hard drive and asks the technical salesperson for advice. Which storage interface should the salesperson recommend for the motherboard and new drive?

20. Which type of motherboard expansion slot has four types ranging from x1 to x16 with each type having a different length of expansion slot?

22. Refer to the exhibit. Which type of expansion slot is shown? Explanation: The four expansion slots shown in the exhibit from left to right are the PCIe x1, PCI, PCIe x16, and PCIx1.

23. Refer to the exhibit. Which device is shown? Explanation: A media reader can be an external USB-attached device or an internal device used to read or write to media cards.

24. When assembling a PC, how is pin 1 identified on the front panel cables so that it can be aligned properly with pin 1 on the motherboard panel connector?

Explanation: Each cable that connects to the front panel connector on the motherboard is marked with a small arrow to identify which pin is pin 1 so that it can be aligned with pin 1 on the panel.

25. A technician is selecting a PC that will be used by an employee who wants to share a keyboard and mouse among three devices. What is a major consideration that needs to be taken into account?

25. A new technician has joined the IT team and is about to service a heavy printer. What advice would you give this technician to avoid any injury when transporting the heavy printer to the service area?

26. How does an inline UPS protect computer equipment against electrical power brownouts and blackouts?

27. Which circumstance increases the likelihood of ESD damage to a computer?

28. Which condition refers to a reduced voltage level of AC power that lasts for an extended period of time?

29. What are two significant sources of EMI? (Choose two.)

30. A technician is unpacking a new PCIe video adapter from an antistatic bag to install the card in a desktop computer. Which two measures should the technician use to protect the card and other computer components? (Choose two.)

31. How should a technician dispose of an empty inkjet printer cartridge?

32. What makes CRT monitor disposal dangerous for a technician who is handling the disposal?

33. A technician is troubleshooting connectivity issues to a PC and needs to verify which cable is plugged into the correct port of the patch panel. What tool should the technician use?

34. Which tool is designed to loosen or tighten crosshead screws?

35. What tool would a technician use to remove a slotted screw?

36. Which tool in Windows OS gives a technician access to initialize disks and create partitions?

37. Which Windows OS tool scans the critical files of the operating system and replaces any files that have been corrupted?

38. Which tool should be used if a user needs to optimize space on a hard drive?

39. Why is documentation of all services and repairs an important organizational tool for a technician?

40. Which tool could potentially cause data loss on hard disk or floppy drives?

41. Why should an antistatic wrist strap be worn when working on electronic equipment?

42. Which precaution should be taken when working inside computer systems?

43. Which cleaning solution is recommended to clean the contacts of computer components?

44. Why should a pencil never be used as a tool when working inside a computer?

45. A technician suspects that a power supply is faulty. How can it be checked?

46. Match the steps of fire extinguisher operation to the order in which they should be completed. (Not all options are used.) 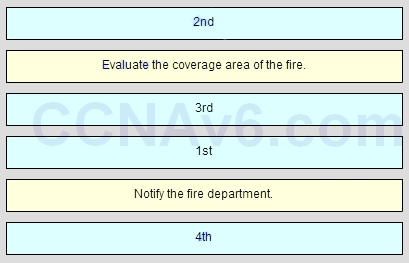 What are three important considerations when installing a CPU on a motherboard? (Choose three.) [Correct Answers]

Great site! Found everything I needed!

A technician is selecting a PC that will be used by an employee who wants to share a keyboard and mouse among three devices. What is a major consideration that needs to be taken into account?

This site is very interested and also very helpful
.

help full for every one who write the cisco exam

this site is usefull everyone

Duplicate comment detected; it looks as though you’ve already said that!

How to pass chapter 2 of cisco

How to pass chapter 2 of cisco

this site is so helpful