2. What method of QoS gives preferential handling for predefined classes of traffic?

3. What are two reasons to implement wireless in a network? (Choose two.)

4. Which configuration-related step is required for IGMP snooping on a Catalyst switch?

5. Refer to the exhibit. The network has EIGRP configured on all routers and has converged on the routes advertised. PIM sparse mode has been also configured on all routers. The routers between the Source and the rendezvous point (RP) have (S,G) state in the multicast routing table and the routers between the RP and the Receivers have (*,G) state in their multicast routing tables. After the first multicast packet is received by the Receivers and the switchover takes place, how will the multicast traffic continue to flow from the Source to the Receivers? 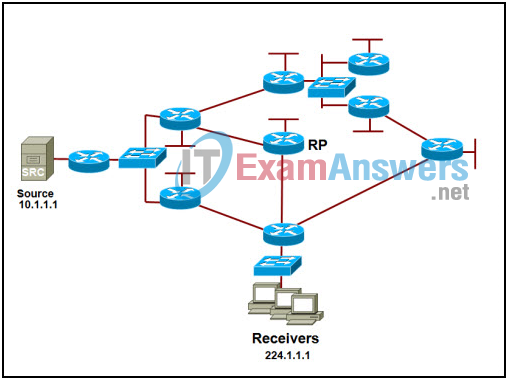 6. What is the result of the global configuration command ip pim send-rp-discovery Loopback0 scope 3?

7. Where should QoS classification and marking be done?

8. For configuring IP multicast routing, what is the purpose of the global configuration mode command ip pim send-rp-announce 10.1.1.1?

9. What are two reasons to implement voice in a network? (Choose two.) 14. Which statement is true about the split MAC architecture?

15. What is the function of a gateway within a VoIP network?

16. What is a major difference between traffic shaping and policing?

18. What is the IP address for the Cisco-RP-announce multicast group?

19. What are two best practices when implementing voice in a network? (Choose two.)

20. What is true about the differences between wireless LANs (WLANs) and LANs?