1. Which place in the network (PIN) is considered to be the highest-risk, as it is the ingress and egress point for internet traffic?

Explanation: The network edge is the ingress and egress point for traffic to and from the internet. It is the most important place in the network (PIN) for e-commerce and is also the highest-risk PIN.

2. What threat protection actions are involved in the “before” phase of the attack continuum?

Explanation: Threat protection activities before a network attack include establishing the policies and implementing prevention solutions that can reduce risk.

3. Question as presented: Match the Cisco Safe security concepts to the description. (Not all options are used.) 4. Question as presented: Match the Cisco SAFE component with the description. (Not all options are used.) 5. Which solution provides comprehensive network and data protection for organizations before, during, and after a malware attack?

Explanation: Cisco Advanced Malware Protection (AMP) is a malware analysis and protection solution that provides comprehensive protection for organizations across the full attack continuum: before, during, and after.

6. Which solution provides VPN access for clients and performs an assessment of the VPN client security posture compliance?

Explanation: Cisco AnyConnect is a client software product that provides VPN access to clients and also is capable of assessing endpoint compliance with antivirus, antispyware, and firewall software installed on the host.

7. What security capability is provided by applying Cisco WSA web reputation filters before an attack?

Explanation: Cisco Web Security Appliance (WSA) provides a variety of protections across the attack continuum before, during, and after an attack. Before an attack Cisco WSA uses web reputation filters to prevent client devices from accessing dangerous websites containing malware or phishing links and to block those that fall below a defined security threshold.

8. Which security appliance passively monitors and analyzes network traffic for potential network intrusion attacks and logs the attacks for analysis?

Explanation: An intrusion detection system (IDS) is a system that passively monitors and analyzes network traffic for potential network intrusion attacks and logs the intrusion attack data for security analysis.

9. According to Gartner, Inc. what three capabilities must a next-generation firewall (NGFW) provide in addition to standard firewall features? (Choose three.)

Explanation: In addition to IPS functionality, Gartner Inc. states a next-generation firewall (NGFW) should include the following capabilities:

10. Question as presented: Match the security platform to the description. (Not all options are used.) 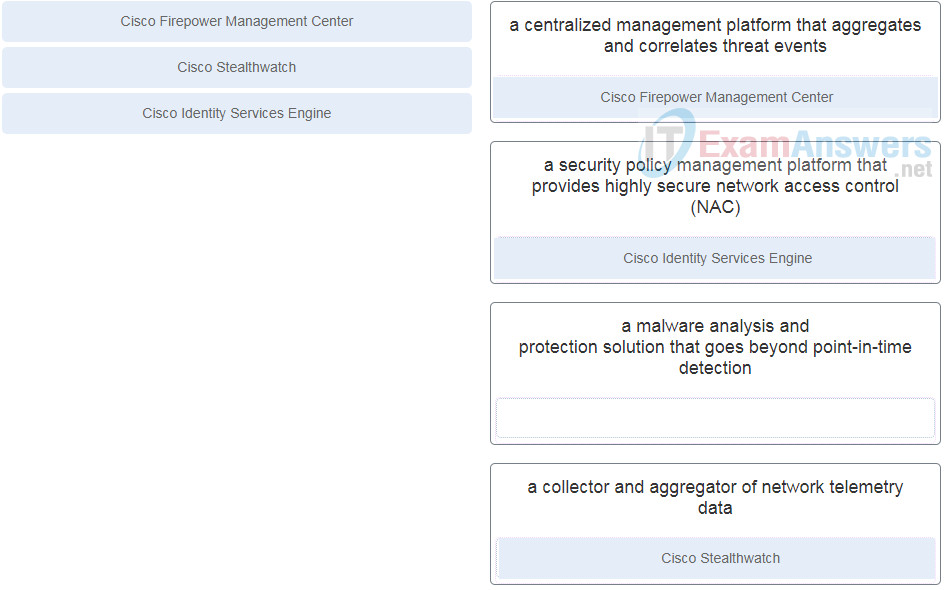 11. Which secure access solution can be implemented to authenticate endpoints that do not support 802.1x or MAB?

Explanation: Some endpoints that need access to the network may not have 802.1x supplicants and may not know the MAC address to perform MAB. This can be a problem for contractors or visitors that need internet access. In such cases web authentication can be implemented to present a user with web portal requesting a username and password.

12. Which EAP method makes use of the Protected Extensible Authentication Protocol (PEAP)?

13. What message is sent every 30 seconds by the 802.1x authenticator to an endpoint to initiate the MAB authentication process?

Explanation: The authenticator initiates the 802.1x MAB authentication process by sending an EAPoL identity request message to the endpoint every 30 seconds to determine if it has a supplicant.

14. What are the three phases of TrustSec configuration? (Choose three.)

Explanation:TrustSec configuration occurs in three phases:
Ingress classification – where SGT tags are assigned to users and resources
Propagation – where mappings to the TrustSec devices are made based on SGT tags
Egress enforcement – where policies are enforced at the egress point of the TrustSec network


Explanation: For an extended ACL to meet these requirements the following need to be included in the access control entries:
identification number in the range 100-199 or 2000-2699
permit or deny parameter
protocol
source address and wildcard
destination address and wildcard
port number or name

Explanation: When packets are checked against an access list, each ACE in the access list is checked in sequence until a match is detected. At the end of all access lists is an implicit deny any ACE. Packets will be dropped or forwarded as directed by the matching ACE. Explanation: Because of the implicit deny at the end of all ACLs, the access-list 1 permit any command must be included to ensure that only traffic from the 172.16.4.0/24 subnet is blocked and that all other traffic is allowed.​

18. What are two limitations of PACLs? (Choose two.)

19. An administrator defined a local user account with a secret password on router R1 for use with SSH. Which three additional steps are required to configure R1 to accept only encrypted SSH connections? (Choose three.)

20. Which command produces an encrypted password that is easily reversible?

21. Which is the preferred method for securing device terminal lines?

Explanation: The preferred method for securing device terminal lines is to use an AAA server. Username-based authentication is recommended as a backup. Configuring a password directly on the line is not recommended.

23. Which statement describes a difference between RADIUS and TACACS+?

Explanation: TACACS+ uses TCP, encrypts the entire packet (not just the password), and separates authentication and authorization into two distinct processes. Both protocols are supported by the Cisco Secure ACS software.

24. What is a feature of a Cisco IOS Zone-Based Policy Firewall?

26. What are two characteristics of the ZBFW default zone? (Choose two.)

Explanation: The default zone is a system-level zone. If an interface is not configured as part of another security zone, it is placed in the default zone automatically. Interfaces in different zones are not permitted to communicate by default.

27. What is the Control Plane Policing (CoPP) feature designed to accomplish?

28. Which command can be issued to protect a Cisco router from unauthorized automatic remote configuration?

29. Which vulnerability can be mitigated by disabling CDP and LLDP on a Cisco device?

Explanation: Both CDP and LLDP are topology discovery tools and can advertise detailed information about a device. To prevent a Cisco device from sending CDP and LLDP packets onto the network, both protocols should be disabled.

30. Which type of threat defense is provided by Cisco Umbrella?

Explanation: Cisco Umbrella serves as a first line of defense for an organization by blocking requests to malicious internet destinations.

31. Which Cisco solution is used by Cisco Web Security Appliance to detect and correlate threats in real time?

Explanation: Cisco Web Security Appliance (WSA) is a web gateway that offers a wide range of security protection. It leverages Cisco Talos for real-time intelligence so that is can stay ahead of the evolving threat landscape and protect against the latest exploits.

32. Refer to the exhibit. Which two ACLs, if applied to the G0/1 interface of R2, would permit only the two LAN networks attached to R1 to access the network that connects to R2 G0/1 interface? (Choose two.) 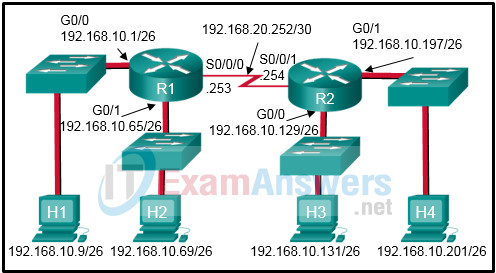 question 4.
stealthwatch is a colector and agregator…
encor book page 722

Which type of threat defense is provided by Cisco Umbrella?

Which Cisco solution is used by Cisco Web Security Appliance to detect and correlate threats in real time? 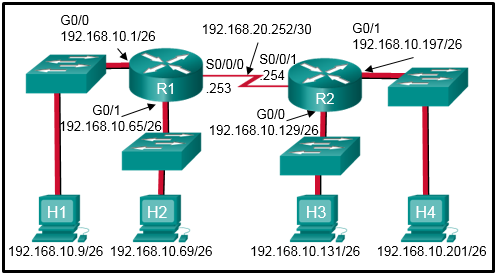 Refer to the exhibit. Which two ACLs, if applied to the G0/1 interface of R2, would permit only the two LAN networks attached to R1 to access the network that connects to R2 G0/1 interface? (Choose two.)