Explanation: ACLs are processed in a top down manner. When an ACL is inspected, if the information in a packet header and an ACL statement match, the remaining statements are not examined, and the packet is either denied or permitted through as specified by the ACL. If a packet header does not match an ACL statement, the packet is tested against the next statement in the list. This matching process continues until the end of the list is reached. Every ACL has an implied deny at the end of the list. This implied deny statement is applied to all packets for which conditions did not test true.

3. Refer to the exhibit. Based on the information that is presented, which statement is true?

Explanation: Packets that match access-list 2 will have route-map 20 applied. This route map specifies that matching packets will have a policy applied that sends these packets to the next hop 172.17.1.2.

5. What are two operational characteristics of policy based routing? (Choose two.)

Explanation: PBR has the following characteristics and capabilities:
It examines packets as they enter a router interface.
Local PBR can identify packets that originate from a router.
It can perform conditional forwarding based on packet characteristics in addition to a source or destination IP address.
It can forward packets to next-hop addresses that are not in the routing table by using the set ip default next-hop command.
The next-hop addresses defined in set statements are not placed in the RIB.

6. Refer to the exhibit. Where would the system administrator apply the following configuration to establish policy-based routing that directs packets from the 10.0.0.0/8 network through the R2 router to the Internet? 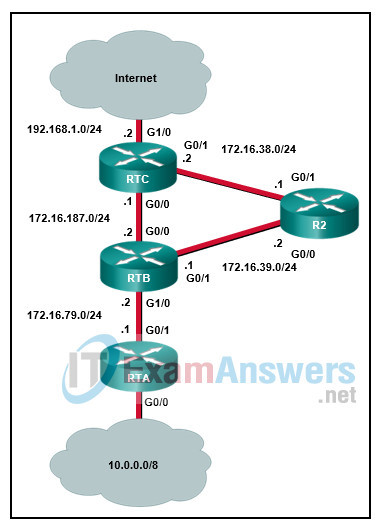 Explanation: Route maps are applied to inbound interfaces. Therefore, in this example the route map should be placed on the G1/0 interface of router RTB so that it can forward packets destined for the internet through router R2.

Explanation: Route maps statements have rules as to how they are applied.
If no processing action is provided, the default value is permit .
If no sequence number is provided, the number increments by 10 automatically.
If there is no matching statement, an implied all prefixes statement is applied.
Processing of route map statements stops after a match criterion is matched.

8. What is the default auto-increment sequence number value of a route map if none is specified?

9. Refer to the exhibit. Two-way redistribution was configured between OSPF and EIGRP on R2. After the redistribution, R3 does not see any external routes coming from the EIGRP domain. The debug ip ospf database external output reveals that no external LSAs are generated for the routes. What could be the problem? Explanation: When redistributing into OSPF, if the optional subnets keyword is not included, only classful networks are redistributed.

10. Refer to the exhibit. How will seed metrics be applied to routes redistributed into EIGRP?

11. Based on the configuration shown, what code will appear in the routing table for redistributed routes on the router?

Explanation: The redistribution configuration exists under the destination protocol and identifies the source protocol. The source protocol, EIGRP in this case, provides the network prefixes that are to be redistributed into OSPF. The option for the metric-type keyword is either 1 or 2. Type 2 is the default if not specified. Redistributed routes appear in the routing table with a code of O E1 or OE 2.

12. What default weight metric is used by BGP for routes redistributed from an IGP?

Explanation: BGP assigns a default weight metric of 32,768 to routes redistributed from IGPs.

Explanation: For a route to be redistributed, it must exist in the RIB. Redistribution is sequential but not transitive. By default, BGP redistributes only EBGP routes into IGP protocols. Although EBGP can be redistributed into an IGP, it is not always recommended. 15. Refer to the exhibit. What metric will RIP routes have when redistributed into EIGRP?

Explanation: The default seed metric for EIGRP is infinity. In this example a new seed metric for OSPF routes is defined but not for RIP routes. Therefore, RIP routes will have a metric of infinity when redistributed into EIGRP.

16. Which two are characteristics of routes redistributed into EIGRP? (Choose two.)

Explanation: External EIGRP routes are assigned an administrative distance of 170 and a default seed metric of infinity when they are redistributed into EIGRP.

18. Refer to the exhibit. What redistribution will result from the configuration on R1?

20. After the implementation of redistribution on a boundary router, a resource connected to a network consisting of varying link speeds is having a delayed response to user connectivity. What issue might exist?

Explanation: When implementing mutual redistribution on a network with links using a variety of speeds, it is common for suboptimal routing to occur.

21. Refer to the exhibit. A network engineer has issued the verification command while troubleshooting a routing loop on the network. What is the error in the configuration?

Explanation: Router BR1 is configured to set a tag of 10 for the routes identified by the prefix list of 10.44.100.0. However, the prefix list being referenced is incorrect and does not exist.

22. While configuring a boundary router that utilizes OSPF and BGP, a network engineer performs redistribution without modifying source or destination metrics. What default value is the engineer using for successful redistribution?

Explanation: The default seed metric is used by specific routing protocols to provide a default metric value for a destination routing process. This ensures that a metric is available and a route can become reachable after the redistribution process between varying routing protocols.

23. Refer to the exhibit. A network engineer has issued the commands shown on a boundary router. What is the result of this command?

Explanation: The EIGRP configuration command distance eigrp ad-internal ad-external is used to modify the default administrative distance on IOS routers. The valid values for the AD are between 1 and 255; a value of 255 stops the installation of the route into the routing information base (RIB).

24. Refer to the exhibit. A junior administrator issues the show ip protocol command while troubleshooting missing NSSA OSPF routes. What is the most likely cause for the missing OSPF routes? 25. A network engineer has issued the following configuration commands:

What outcome is expected from the commands issued?

26. A boundary router is performing mutual redistribution between OSPF and EIGRP. What process should be taken to have an external EIGRP route preferred over an OSPF route to the same destination network?

27. An IPv6 network topology using redistribution is experiencing reachability issues after migrating from an IPv4 deployment. How is the deployment of IPv6 redistribution different from what it is with IPv4?

Explanation: In order to include the networks associated with the local interfaces participating in the routing process that is being redistributed, the include-connected keyword must be used.

28. If multiple seed metrics are defined with redistribution, which metric would be preferred over others?

Explanation: When working with dissimilar routing protocols, a network technician must remember that a seed metric has the following order of preference:

30. What is the default OSPF seed metric for routes redistributed from BGP?

31. A network engineer has issued the show run | section router eigrp command. What outcome is expected from the command output?

Explanation: The metric keyword is required when redistributing OSPF routes into an EIGRP routing process.

32. A network engineer has issued the following configuration commands:

What outcome is expected from the commands issued?

Hi, Question 32 is quite confusing to me. There is OSPF process 10 (ospfv2 for ipv4) in the configuration and the same ospf is “redistributed” under ipv6 adress-family section of BGP 65001. I guess, that answer should be “This configuration of redistribution is invalid” :)