1. Which one of the following GLBP functions answers ARP requests?

2. Which two statements about VRRP are true? (Choose two.)

3. Two routers are configured for an HSRP group. One router uses the default HSRP priority. What priority should be assigned to the other router to make it more likely to be the active router?

5. Refer to the exhibit. What action does the command standby 1 track Serial0/0/0 on router R1 perform? 6. Refer to the exhibit. Router RTA has been configured as the active HSRP router. Router RTB is to be the standby HSRP router. However, once the indicated configuration was applied to router RTB, the console began to display the message %HSRP-4-DIFFVIP1. What is the cause of the message?

7. Which statement is true about Virtual Router Redundancy Protocol (VRRP)?

8. Refer to the exhibit. What statement is true about the output of the show standby command? 9. Refer to the exhibit. Based on the provided configuration, which routers are the master and the backup virtual routers for the hosts that are connected to the VRRP group 1? 10. Which two statements are true about the Hot Standby Router Protocol (HSRP)?

11. Refer to the exhibit. Switch DSw1 is the active virtual gateway (AVG) and DSw2 is an active virtual forwarder (AVF). Based on this information, which two GLBP statements are true? (Choose two.) 12. Which of the following GLBP load-balancing options is configured if the host is guaranteed the use of the same virtual MAC address?

13. What are two functions of the standby router in an HSRP group? (Choose two.)

14. Which statement is true about the gateway redundancy protocols ?

15. Refer to the exhibit. Which statement is true about best practice and the exhibited network design? 16. HSRP makes use of which protocol to deliver messages to the HSRP group.

17. Which of the following do multilayer switches share when running HSRP?

18. Even with the use of equipment from multiple vendors, which protocol ensures immediate and transparent recovery from first-hop failures? 21. Any router in the HRSP group that is not the active router could be what?

22. What state would an HSRP router be in if it was answering for the virtual IP address?

23. Which of the following is not an HSRP state.

25. What is the default advertisement of the VRRP master router?

26. Refer to the graphic, Routers A, B, C, and D are members of a VRRP virtual router group. Given the design in the exhibit, which router will become a master virtual router for the group? 27. How many member routers can be forwarding in a GLBP group?

28. How long does a standby router take to detect the loss of the active router in HSRP with default timer values?

29. Refer to the graphic, which statement is true about the following graphic: 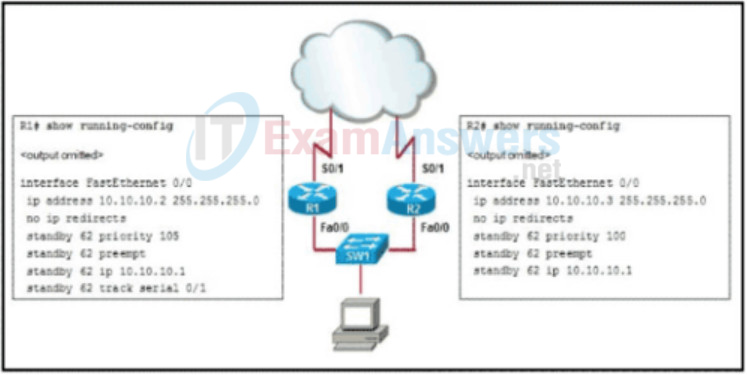 30. A multilayer switch is configured as follows:

Which IP address should a client PC use as its default gateway?

31. Refer to the graphic. The STP and HRSP timers are set to their default values. To align the two failover protocols, to what value should the STP hello timer be set? 33. Which one of the following protocols is the best choice for load balancing redundant gateways?

Refer to the exhibit. Based on the provided configuration, which routers are the master and the backup virtual routers for the hosts that are connected to the VRRP group 1?