Explanation: Augmented Reality (AR) superimposes images and audio over the real world in real time. It does allow ambient light and does not require headsets all the time.

2. Which motherboard form factor has the smallest footprint for use in thin client devices?

3. Which disk drive type contains a magnetic HDD with onboard flash memory serving as a non-volatile cache?

Explanation: The Solid State Hybrid Drives (SSHD) combine a magnetic HDD with onboard flash memory serving as a non-volatile cache but cost less then SSD.

4. Refer to the exhibit. How is the connector used in a PC? 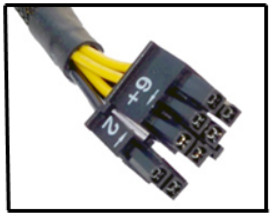 Explanation: This connector is called a 6/8-pin PCIe power connector and is used to supply power to various components of the computer.

5. Refer to the exhibit. What type of connecter is displayed? 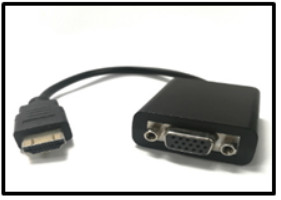 Explanation: The displayed item is a HDMI to VGA converter that is used to convert digital signals to analog signals.

7. Which port allows for the transmission of high definition video using the DisplayPort protocol?

8. Which action can reduce the risk of ESD damage when computer equipment is being worked on?

Explanation: To help prevent ESD damage, use grounded mats on work benches and grounded floor mats in work areas. You can also use an antistatic wrist strap to prevent ESD strikes except when working inside power supplies or CRT monitors.

9. Which type of input device can identify users based on their voice?

Explanation: A biometric identification device is an input device that can identify a user based on a unique physical feature such as a fingerprint or voice. A digitizer is used with a stylus pen to design and create images or blueprints. A scanner is used to digitize an image or document. A KVM switch can connect multiple computers to one keyboard, monitor, and mouse.

11. How are the internal components of a computer protected against ESD?

Explanation: Electrostatic discharge (ESD) can occur when there is a buildup of an electric charge (static electricity) on a surface which comes into contact with another. This can be mitigated by grounding the internal components of the computer to the case.

12. Which expansion slot is used by an NVMe compliant device?

13. A technician wants to replace a failing power supply on a high-end gaming computer. Which form factor should the technician be looking for?

Explanation: High-end desktop and gaming computers use the EPS12V power supply form factor. It is also used in servers.

14. Which two PC components communicate with the CPU through the Southbridge chipset? (Choose two.)

Explanation: A 6/8-pin PCIe power connector is used to supply power to various components of a computer.

16. What type of connecter is used to convert digital signals to analog signals?

Explanation: An HDMI-to-VGA converter is used to convert digital signals to analog signals.

17. Which two of these devices are considered to be the most common input devices? (Choose two.)

Explanation: Fingerprint scanners, keyboards, and mice are all considered input devices, but the two considered the most common are the mouse and keyboard.