1. What happens to runt frames received by a Cisco Ethernet switch?

Explain:
In an attempt to conserve bandwidth and not forward useless frames, Ethernet devices drop frames that are considered to be runt (less than 64 bytes) or jumbo (greater than 1500 bytes) frames.

2. What are the two sizes (minimum and maximum) of an Ethernet frame? (Choose two.)

Explain:
Ethernet is the most common LAN protocol in the world. It operates at Layer 1 and 2, but is not required for Internet communication. The OSI model is used to describe how networks operate. A WAN connects multiple sites located in different countries.

Explain:
Logical link control is implemented in software and enables the data link layer to communicate with the upper layers of the protocol suite. Logical link control is specified in the IEEE 802.2 standard. IEEE 802.3 is a suite of standards that define the different Ethernet types. The MAC (Media Access Control) sublayer is responsible for the placement and retrieval of frames on and off the media. The MAC sublayer is also responsible for adding a header and a trailer to the network layer protocol data unit (PDU).

5. What statement describes a characteristic of MAC addresses?

6. Which statement is true about MAC addresses?

Explain:
A MAC address is composed of 6 bytes. The first 3 bytes are used for vendor identification and the last 3 bytes must be assigned a unique value within the same OUI. MAC addresses are implemented in hardware. A NIC needs a MAC address to communicate over the LAN. The IEEE regulates the MAC addresses.

7. Which destination address is used in an ARP request frame?

8. What addressing information is recorded by a switch to build its MAC address table?

Explain:
A switch builds a MAC address table by inspecting incoming Layer 2 frames and recording the source MAC address found in the frame header. The discovered and recorded MAC address is then associated with the port used to receive the frame.

9. Refer to the exhibit. The exhibit shows a small switched network and the contents of the MAC address table of the switch. PC1 has sent a frame addressed to PC3. What will the switch do with the frame? Explain:
The MAC address of PC3 is not present in the MAC table of the switch. Because the switch does not know where to send the frame that is addressed to PC3, it will forward the frame to all the switch ports, except for port 4, which is the incoming port.

10. Which switching method uses the CRC value in a frame?

Explain:
When the store-and-forward switching method is used, the switch receives the complete frame before forwarding it on to the destination. The cyclic redundancy check (CRC) part of the trailer is used to determine if the frame has been modified during transit.​​ In contrast, a cut-through switch forwards the frame once the destination Layer 2 address is read. Two types of cut-through switching methods are fast-forward and fragment-free.

Explain:
Auto-MDIX is a feature that is enabled on the latest Cisco switches and that allows the switch to detect and use whatever type of cable is attached to a specific port.​​

12. Refer to the exhibit. PC1 issues an ARP request because it needs to send a packet to PC2. In this scenario, what will happen next? Explain:
When a network device wants to communicate with another device on the same network, it sends a broadcast ARP request. In this case, the request will contain the IP address of PC2. The destination device (PC2) sends an ARP reply with its MAC address.

13. What is the aim of an ARP spoofing attack?

Explanation: In an ARP spoofing attack, a malicious host intercepts ARP requests and replies to them so that network hosts will map an IP address to the MAC address of the malicious host.

14. What is a characteristic of port-based memory buffering?

Explain:Buffering is a technique used by Ethernet switches to store frames until they can be transmitted. With port-based buffering, frames are stored in queues that are linked to specific incoming and outgoing ports.

15. What is the minimum Ethernet frame size that will not be discarded by the receiver as a runt frame?

16. What are two potential network problems that can result from ARP operation? (Choose two.)

Explain:
Large numbers of ARP broadcast messages could cause momentary data communications delays. Network attackers could manipulate MAC address and IP address mappings in ARP messages with the intent to intercept network traffic. ARP requests and replies cause entries to be made into the ARP table, not the MAC address table. ARP table overflows are very unlikely. Manually configuring static ARP associations is a way to prevent, not facilitate, ARP poisoning and MAC address spoofing. Multiple ARP replies resulting in the switch MAC address table containing entries that match the MAC addresses of connected nodes and are associated with the relevant switch port are required for normal switch frame forwarding operations. It is not an ARP caused network problem.

17. Fill in the blank.
A collision fragment, also known as a RUNT frame, is a frame of fewer than 64 bytes in length.

Explain:
A runt frame is a frame of fewer than 64 bytes, usually generated by a collision or a network interface failure.

18. Fill in the blank.
On a Cisco switch, port-based memory buffering is used to buffer frames in queues linked to specific incoming and outgoing ports.

19. Fill in the blank.
ARP spoofing is a technique that is used to send fake ARP messages to other hosts in the LAN. The aim is to associate IP addresses to the wrong MAC addresses.

Explain:
ARP spoofing or ARP poisoning is a technique used by an attacker to reply to an ARP request for an IPv4 address belonging to another device, such as the default gateway.

20. Which statement describes the treatment of ARP requests on the local link?

21. Refer to the exhibit. The switches are in their default configuration. Host A needs to communicate with host D, but host A does not have the MAC address for its default gateway. Which network hosts will receive the ARP request sent by host A? 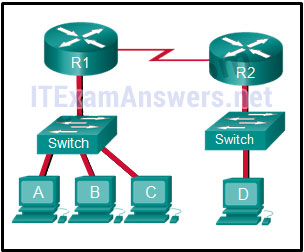 Explain:
Since host A does not have the MAC address of the default gateway in its ARP table, host A sends an ARP broadcast. The ARP broadcast would be sent to every device on the local network. Hosts B, C, and router R1 would receive the broadcast. Router R1 would not forward the message.

22. Refer to the exhibit. A switch with a default configuration connects four hosts. The ARP table for host A is shown. What happens when host A wants to send an IP packet to host D? 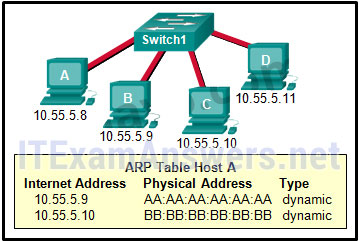 23. True or False?
When a device is sending data to another device on a remote network, the Ethernet frame is sent to the MAC address of the default gateway.

Explain:
A MAC address is only useful on the local Ethernet network. When data is destined for a remote network of any type, the data is sent to the default gateway device, the Layer 3 device that routes for the local network.

24. The ARP table in a switch maps which two types of address together?

Explain:
The switch ARP table keeps a mapping of Layer 2 MAC addresses to Layer 3 IP addresses. These mappings can be learned by the switch dynamically through ARP or statically through manual configuration.

25. Match the characteristic to the forwarding method. (Not all options are used.)

Explain: A store-and-forward switch always stores the entire frame before forwarding, and checks its CRC and frame length. A cut-through switch can forward frames before receiving the destination address field, thus presenting less latency than a store-and-forward switch. Because the frame can begin to be forwarded before it is completely received, the switch may transmit a corrupt or runt frame. All forwarding methods require a Layer 2 switch to forward broadcast frames.

26. What is a characteristic of a contention-based access method?

27. What is the purpose of the preamble in an Ethernet frame?

29. Which two statements are correct about MAC and IP addresses during data transmission if NAT is not involved? (Choose two.)

31. A host is trying to send a packet to a device on a remote LAN segment, but there are currently no mappings in its ARP cache. How will the device obtain a destination MAC address?

32. A network administrator is connecting two modern switches using a straight-through cable. The switches are new and have never been configured. Which three statements are correct about the final result of the connection? (Choose three.)

33. A Layer 2 switch is used to switch incoming frames from a 1000BASE-T port to a port connected to a 100Base-T network. Which method of memory buffering would work best for this task?

34. When would a switch record multiple entries for a single switch port in its MAC address table?

36. How does adding an Ethernet line card affect the form factor of a switch?

37. Which address or combination of addresses does a Layer 3 switch use to make forwarding decisions?

38. What statement illustrates a drawback of the CSMA/CD access method?

40. Which address or combination of addresses does a Layer 3 switch use to make forwarding decisions? 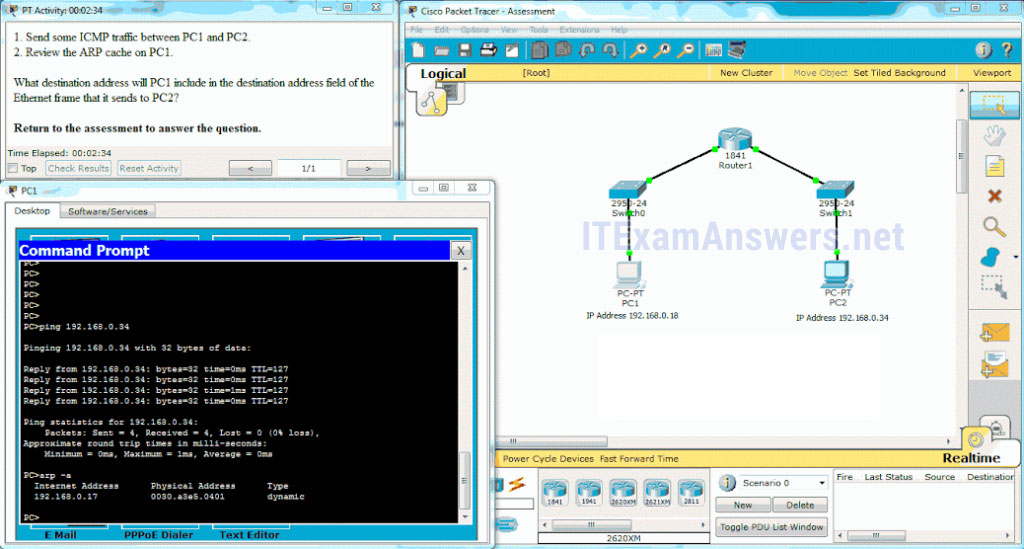 42. How does adding an Ethernet line card affect the form factor of a switch?

43. What statement illustrates a drawback of the CSMA/CD access method?

44. A network administrator issues the following commands on a Layer 3 switch:

What is the administrator configuring?

45. The binary number 0000 1010 can be expressed as “A” in hexadecimal.
Match the seven fields of an Ethernet frame to their respective contents. (Not all options are used.)

New Question in CCNA 6.0#5
What is the aim of an ARP spoofing attack?
to flood the network with ARP reply broadcasts
X to fill switch MAC address tables with bogus addresses
to associate IP addresses to the wrong MAC address
to overwhelm network hosts with ARP requests

True or False?
When a device is sending data to another device on a remote network, the Ethernet frame is sent to the MAC address of the default gateway.

Refer to the exhibit. The switches are in their default configuration. Host A needs to communicate with host D, but host A does not have the MAC address for its default gateway. Which network hosts will receive the ARP request sent by host A?

How is number 9 right? The questions is Refer to the exhibit. The exhibit shows a small switched network and the contents of the MAC address table of the switch. PC1 has sent a frame addressed to PC3. What will the switch do with the frame?

My thing is it already has port 1&3’s Mac address so why would it still send out those ports?

am enjoying the course from laikipia university campus kenya