1. What is the function of the kernel of an operating software?

Explain:
Operating systems function with a shell, a kernel, and the hardware. The shell interfaces with the users, allowing them to request specific tasks from the device. The kernel provisions resources from the hardware to meet software requirements. The hardware functions by using drivers and their underlying electronics. The hardware represents the physical components of the device.

2. A network administrator needs to keep the user ID, password, and session contents private when establishing remote CLI connectivity with a switch to manage it. Which access method should be chosen?

Explain:
To be truly private a technician would use a Console connection however if remote management is required SSH provides a secure method.

3. Which procedure is used to access a Cisco 2960 switch when performing an initial configuration in a secure environment?

Explain:
Telnet and SSH require active networking services to be configured on a Cisco device before they become functional. Cisco switches do not contain AUX ports.

4. Which command or key combination allows a user to return to the previous level in the command hierarchy?

Explain:
If a Cisco IOS device has a valid IOS and a valid configuration file, it will boot into user EXEC mode. A password will be required to enter privileged EXEC mode.

6. Which two functions are provided to users by the context-sensitive help feature of the Cisco IOS CLI? (Choose two.)

Explain:
Context-sensitive help provides the user with a list of commands and the arguments associated with those commands within the current mode of a networking device. A syntax checker provides error checks on submitted commands and the TAB key can be used for command completion if a partial command is entered.

7. Which information does the show startup-config command display?

8. Why is it important to configure a hostname on a device?

Explain:
It is important to configure a hostname because various authentication processes use the device hostname. Hostnames are helpful for documentation, and they identify the device during remote access.

Explain:
Some guidelines for naming conventions are that names should:
Start with a letter
Contain no spaces
End with a letter or digit
Use only letters, digits, and dashes
Be less than 64 characters in length

10. How does the service password-encryption command enhance password security on Cisco routers and switches?

Explain:
The service password-encryption command encrypts plaintext passwords in the configuration file so that they cannot be viewed by unauthorized users.

11. In your opinion (this has no bearing on your grade), please indicate how enthusiastic you are about the content of this course and the things you’re learning (or have learned):

12. In your opinion (this has no bearing on your grade), please indicate your interest in this course:

13. Refer to the exhibit. A network administrator is configuring the MOTD on switch SW1. What is the purpose of this command?

Explain:
A banner message can be an important part of the legal process in the event that someone is prosecuted for breaking into a device. A banner message should make it clear that only authorized personnel should attempt to access the device. However, the banner command does not prevent unauthorized entry.

14. While trying to solve a network issue, a technician made multiple changes to the current router configuration file. The changes did not solve the problem and were not saved. What action can the technician take to discard the changes and work with the file in NVRAM?

15. What is the function of the kernel of an operating system?

Explain:
Operating systems function with a shell, a kernel, and the hardware. The shell interfaces with the users, allowing them to request specific tasks from the device. The kernel provisions resources from the hardware to meet software requirements. The hardware functions by using drivers and their underlying electronics. The hardware represents the physical components of the device.

Explain:If a Cisco IOS device has a valid IOS and a valid configuration file, it will boot into user EXEC mode. A password will be required to enter privileged EXEC mode.

17. In your opinion (this has no bearing on your grade), please rate your motivation to do well in this course:

18. Which statement is true about the running configuration file in a Cisco IOS device?

Explain:
As soon as configuration commands are entered into a router, they modify the device immediately. Running configuration files can not be deleted nor are they saved automatically.

19. What are two characteristics of RAM on a Cisco device? (Choose two.)

Explain:
RAM stores data that is used by the device to support network operations. The running configuration is stored in RAM. This type of memory is considered volatile memory because data is lost during a power cycle. Flash memory stores the IOS and delivers a copy of the IOS into RAM when a device is powered on. Flash memory is nonvolatile since it retains stored contents during a loss of power.

20. Which interface allows remote management of a Layer 2 switch?

Explain:
In a Layer 2 switch, there is a switch virtual interface (SVI) that provides a means for remotely managing the device.

21. Which interface is the default SVI on a Cisco switch?

Explain:
An SVI is a virtual interface and VLAN 1 is enabled by default on Cisco switches. VLAN 99 must be configured to be used. FastEthernet 0/1 and GigabitEthernet 0/1 are physical interfaces.

22. Why would a Layer 2 switch need an IP address?

Explain:
A switch, as a Layer 2 device, does not need an IP address to transmit frames to attached devices. However, when a switch is accessed remotely through the network, it must have a Layer 3 address. The IP address must be applied to a virtual interface rather than to a physical interface. Routers, not switches, function as default gateways.

23. What command can be used on a Windows PC to see the IP configuration of that computer?

24. A technician is adding a new PC to a LAN. After unpacking the components and making all the connections, the technician starts the PC. After the OS loads, the technician opens a browser, and verifies that the PC can reach the Internet. Why was the PC able to connect to the network with no additional configuration?

Explain:
The new PC was preconfigured to use DHCP. When the PC is connected to a network that uses DHCP, it gets the IP address settings from the DHCP server that will allow it to function on the network. All devices require at least an IP address and subnet mask to function on a LAN. DNS does not automatically configure addresses on hosts. PC virtual interfaces are not universally compatible with LANs and do not necessarily provide a host with an IP address. At this place in the course, virtual interfaces are used on network switches.

Explain:
The ping destination command can be used to test connectivity. 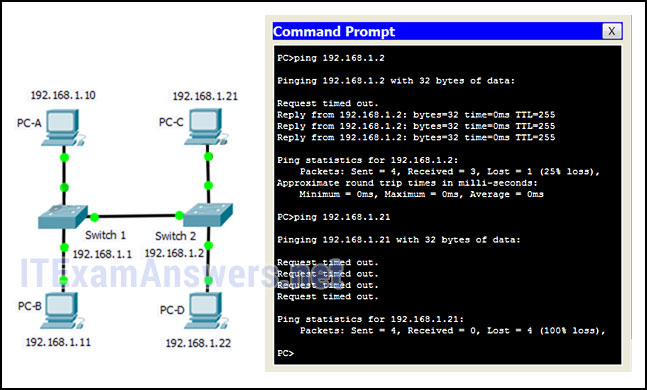 Explain:
The exhibit shows ping tests to two devices. One device has the IP address of 192.168.1.2, which is switch 2. The other test is to the IP address of 192.168.1.21, which is host PC-C. For the first test, to switch 2, the results are successful, with four reply messages received. This means that connectivity exists to switch 2. For the second test, all four messages timed out. This indicates that connectivity does not exist to PC-C. 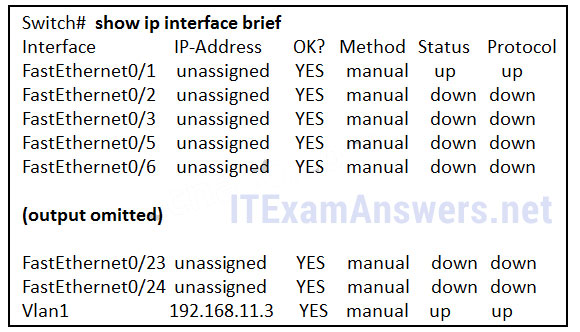 Refer to the exhibit. What three facts can be determined from the viewable output of the show ip interface brief command? (Choose three.)

Explain:
Vlan1 is the default SVI. Because an SVI has been configured, the switch can be configured and managed remotely. FastEthernet0/0 is showing up and up, so a device is connected.

28. An administrator is configuring a switch console port with a password. In what order will the administrator travel through the IOS modes of operation in order to reach the mode in which the configuration commands will be entered? (Not all options are used.)

29. Match the definitions to their respective CLI hot keys and shortcuts. (Not all options are used.)
Question

Place the options in the following order:
completes abbreviated commands and parameters
displays the next screen
scrolls backwards through previously entered commands
– not scored –
provides context-sensitive help
aborts commands such as trace and ping

Explain:
The shortcuts with their functions are as follows:
– Tab – Completes the remainder of a partially typed command or keyword
– Space bar – displays the next screen
– ? – provides context-sensitive help
– Up Arrow – Allows user to scroll backward through former commands
– Ctrl-C – cancels any command currently being entered and returns directly to privileged EXEC mode
– Ctrl-Shift-6 – Allows the user to interrupt an IOS process such as ping or traceroute

30. A network administrator is planning an IOS upgrade on several of the head office routers and switches. Which three questions must be answered before continuing with the IOS selection and upgrade? (Choose three.)

31. A router has a valid operating system and a configuration stored in NVRAM. When the router boots up, which mode will display?

32. Which two characters are allowed as part of the hostname of a Cisco device? (Choose two.)

33. What is a result of using the service password-encryption command on a Cisco network device?

35. Passwords can be used to restrict access to all or parts of the Cisco IOS. Select the modes and interfaces that can be protected with passwords. (Choose three.)

36. What benefit does DHCP provide to a network?

37. What criterion must be followed in the design of an IPv4 addressing scheme for end devices?

38. Refer to the exhibit. A switch was configured as shown. A ping to the default gateway was issued, but the ping was not successful. Other switches in the same network can ping this gateway. What is a possible reason for this?

39. Match the difinitions to their respective CLI hot keys and shortcuts.

40. Which two features are characteristics of flash memory? (Choose two.)

41. Match the description to the common IOS CLI access method. Console port
It displays startup, debugging, and error messages by default.*
It can be used to restore an out-of-box configuration on a switch or router.*
Virtual interface
It allows access throught use of Telnet or SSH protocols.*
It requires an active network connection.*
AUX port
It connects throught dialup connections*
It is not supported on Catalyst switch devices*