1. On which switch interface would an administrator configure an IP address so that the switch can be managed remotely?

2. Which two issues might cause excessive runt and giant frames in an Ethernet network? (Choose two.)

3. Refer to the exhibit. Match the packets with their destination IP address to the exiting interfaces on the router. (Not all targets are used.)

4. Open the PT Activity. Perform the tasks in the activity instructions and then answer the question. Which task has to be performed on Router 1 for it to establish an OSPF adjacency with Router 2?

5. Refer to the exhibit. A network administrator is reviewing port and VLAN assignments on switch S2 and notices that interfaces Gi0/1 and Gi0/2 are not included in the output. Why would the interfaces be missing from the output?

6. Which address type is not supported in IPv6?

7. Which feature on a Cisco router permits the forwarding of traffic for which there is no specific route?

8. A network administrator is using the router-on-a-stick model to configure a switch and a router for inter-VLAN routing. What configuration should be made on the switch port that connects to the router?

9. Refer to the exhibit. A ping to PC3 is issued from PC0, PC1, and PC2 in this exact order. Which MAC addresses will be contained in the S1 MAC address table that is associated with the Fa0/1 port?

10. A network administrator is designing an IPv4 addressing scheme and requires these subnets.

Which combination of subnets and masks will provide the best addressing plan for these requirements?

11. A network administrator has been allocated the IPv4 10.10.240.0/20 block of addresses for a LAN. Two devices on two different, but contiguous, subnets on the LAN have been assigned the addresses 10.10.247.1/21 and 10.10.248.10/24, respectively. The administrator has to create a third subnet from the remaining address range. To optimize the use of this address space, the new subnet will follow on directly from the existing subnets. What is the first available host address in the next available subnet?​

12. When creating an IPv6 static route, when must a next-hop IPv6 address and an exit interface both be specified?

13. Refer to the exhibit. A network engineer is troubleshooting host connectivity on a LAN that uses a first hop redundancy protocol. Which IPv4 gateway address should be configured on the host? 15. Fill in the blank.
When port security is enabled, a switch port uses the default violation mode of shutdown until specifically configured to use a different violation mode.

16. Refer to the exhibit. What protocol can be configured on gateway routers R1 and R2 that will allow traffic from the internal LAN to be load balanced across the two gateways to the Internet?

17. What is the purpose of setting the native VLAN separate from data VLANs? 19. If no bridge priority is configured in PVST, which criteria is considered when electing the root bridge?

20. Refer to the exhibit. A network administrator is configuring EIGRP AS 20 on Router_2 and has received the error that is shown. What is the cause of the error?

21. Refer to the exhibit. Router R1 has recently been configured to operate in an IPv6 only network and is connected via interface Gigabit Ethernet 0/0 to router R2. R2 is configured correctly, but will not form a neighbor relationship with R1 What is the problem? 22. Which is a characteristic of EtherChannel?

23. Refer to the exhibit. Based on this configuration, which two OSPF router roles are assumed by R2? (Choose two.) 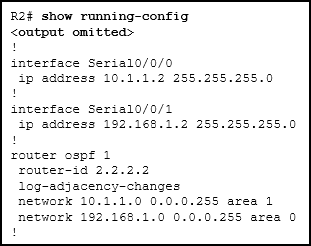 25. What is the most likely cause when the output of the show interface command shows that a switch interface is up but the line protocol is down?

26. What are two WAN connection enhancements that are achieved by implementing PPPoE? (Choose two.)

27. Refer to the exhibit. A network administrator is reviewing the configuration of switch S1. Which protocol has been implemented to group multiple physical ports into one logical link? 28. Fill in the blank. Use only an acronym. PPPoE creates a PPP tunnel through the DSL connection for the purpose of sending PPP frames.

29. Refer to the exhibit. Host A sends a data packet to host B. What will be the addressing information of the data packet when it reaches host B?

The correct answer is option 1

31. What are two load-balancing methods in the EtherChannel technology? (Choose two.)

32. Which WAN technology can serve as the underlying network to carry multiple types of network traffic such as IP, ATM, Ethernet, and DSL?

33. Which WAN connectivity method would be used in a remote location where there are no service provider networks?

34. How many 64 kb/s voice channels are combined to produce a T1 line?

35. Refer to the exhibit. All the displayed switches are Cisco 2960 switches with the same default priority and operating at the same bandwidth. Which three ports will be STP designated ports? (Choose three.) 36. Open the PT Activity. Perform the tasks in the activity instructions and then answer the question. Why are users in the OSPF network not able to access the Internet?

37. Refer to the exhibit. Which interface on switch S1 should be configured as a DHCP snooping trusted port to help mitigate DHCP spoofing attacks? 38. An administrator who is troubleshooting connectivity issues on a switch notices that a switch port configured for port security is in the err-disabled state. After verifying the cause of the violation, how should the administrator re-enable the port without disrupting network operation?

39. Refer to the exhibit. Routers R1 and R2 have been configured for PPP using CHAP as the authentication protocol, but the link will not go to the up and up state. What configuration error has been made?

40. Match the FHRP protocols to their description. (Not all options are used.)

42. What are two reasons why an administrator might choose to use static routing rather than dynamic routing? (Choose two.)

43. Refer to the exhibit. A network administrator issues the show lldp neighbors command to display information about neighboring devices. What can be determined based on the information?

44. How will a router handle static routing differently if Cisco Express Forwarding is disabled?

45. An OSPFv3 router has no IPv4 addresses configured and the router ID has not been manually set. What is the result of this configuration?

46. What type of installation is needed to view syslog messages?

47. Which two things should a network administrator modify on a router to perform password recovery? (Choose two.)

48. What effect does the default-information originate command have on a Cisco router that is configured for RIP?

49. What information can be verified through the show ip dhcp binding command?

51. What are three characteristics of the CSMA/CD process? (Choose three.)

53. Refer to the exhibit. Static NAT is being configured to allow PC 1 access to the web server on the internal network. What two addresses are needed in place of A and B to complete the static NAT configuration? (Choose two.)

54. What is the purpose of the overload keyword in the ip nat inside source list 1 pool NAT_POOL overload command?

55. Refer to the exhibit. Which source address is being used by router R1 for packets being forwarded to the Internet?

56. Which three layers of the OSI model map to the application layer of the TCP/IP model? (Choose three.)

57. Which address prefix range is reserved for IPv4 multicast?

58. Which IPv6 prefix is reserved for communication between devices on the same link?

59. Refer to the exhibit. A network administrator needs to add an ACE to the TRAFFIC-CONTROL ACL that will deny IP traffic from the subnet 172.23.16.0/20. Which ACE will meet this requirement?

60. Refer to the exhibit. Packets destined to which two networks will require the router to perform a recursive lookup? (Choose two.) 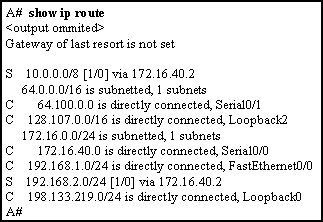 61. Refer to the exhibit. Which three events will occur as a result of the configuration shown on R1? (Choose three.)

62. Which protocol defines port-based authentication to restrict unauthorized hosts from connecting to the LAN through publicly accessible switch ports?

64. Data is being sent from a source PC to a destination server. Which three statements correctly describe the function of TCP or UDP in this situation? (Choose three.)

65. Which type of IPv6 address refers to any unicast address that is assigned to multiple hosts?

66. Refer to the exhibit. A network technician issues the command show vlan to verify the VLAN configuration. Based on the output, which port should be assigned with native VLAN?

67. Match the port state with its condition. (Not all options are used.)

69. Which technology supports CHAP authentication over a dialer interface?

70. Which two issues can cause both runts and giants in Ethernet networks? (Choose two.)

Explanation: Because collisions are a normal aspect of half-duplex communications, runt and giant frames are common by-products of those operations. A malfunctioning NIC can also place frames on the network that are either too short or longer than the maximum allowed length. CRC errors can result from using the wrong type of cable or from electrical interference. Using a cable that is too long can result in late collisions rather than runts and giants.

Which two issues can cause both runts and giants in Ethernet networks? (Choose two.)

hope you guys could help with ccnp.