1. A switch is participating in a VTP domain and configured as a VTP server. The switch needs to propagate VLAN 10 (used by the Manufacturing department) throughout the VTP domain, but does not have any directly connected hosts using that particular VLAN. Which configuration would satisfy this requirement?

The best practice to add a VLAN to the VLAN database with no local hosts to be in that VLAN is to configure that VLAN (vlan 10) with its name (name Manufacturing) and use the exit command to complete the configuration. Do not assign any switch interfaces to that VLAN.

2. Which command should the network administrator implement to prevent the transfer of DTP frames between a Cisco switch and a non-Cisco switch?

To prevent DTP frames from being generated by the interface of a Cisco switch, use the S1(config-if)# switchport nonegotiate command. DTP is Cisco proprietary and not usable by other vendors.

3. While configuring inter-VLAN routing on a multilayer switch, a network administrator issues the no switchport command on an interface that is connected to another switch. What is the purpose of this command?

4. What happens to switch ports after the VLAN to which they are assigned is deleted?

The affected ports must be reconfigured for an active VLAN.

A switch in VTP server mode can create, modify, and delete VLANs as well as transmit that information (if the switch has the highest VTP configuration revision number) to other switches in the same VTP domain.

6. What is a characteristic of a routed port on a Layer 3 switch?

7. Where is the vlan.dat file stored on a switch?

Normal range VLAN configurations are stored within a VLAN database file, called vlan.dat, which is located in the flash memory of the switch.

8. How are IP addressing designs affected by VLAN implementations?

Each VLAN requires its own network number, broadcast address, and valid IP addresses because each VLAN is a separate network. IP addressing schemes are frequently designed with the VLAN numbers as part of the design.

9. What is a disadvantage of using multilayer switches for inter-VLAN routing?

10. Refer to the exhibit. The switch does the routing for the hosts that connect to VLAN 5. If the PC accesses a web server from the Internet, at what point will a VLAN number be added to the frame? 11. Fill in the blank.
In a Cisco switch, the extended range VLAN information is stored in the_____________file.
Correct Answer: running configuration

12. Which three actions can cause problems with a VTP implementation? (Choose three.)

Besides domain name, other issues to check are VTP versions, VTP password, and revision number before inserting a switch into any network where VTP is active.

13. Which two events will cause the VTP revision number on a VTP server to change? (Choose two.)

Changing the VTP domain name always resets the VTP revision number to 0. This is an important step in adding switches to an existing VTP domain no matter what VTP mode the switch uses.

14. On a Cisco switch, where is extended range VLAN information stored?

Extended range VLANs, 1006 through 4094, are not written to the vlan.dat file but are saved in the running configuration file.

15. Refer to the exhibit. PC1 is unable to communicate with server 1. The network administrator issues the show interfaces trunk command to begin troubleshooting. What conclusion can be made based on the output of this command?

16. Refer to the exhibit. Communication between the VLANs is not occurring. What could be the issue?

The subinterfaces could not have an IP address unless the encapsulation mode had been configured. When a duplex issue exists, communication can still occur, but it is at a slower than optimum rate.

17. Which two VTP parameters must be identical on all switches in the network in order to participate in the same VTP domain? (Choose two.)

VTP updates are sent to other switches in the same domain with the same password. The configuration revision number is used to determine whether a switch keeps its existing VLAN database or updates it with the new information.

18. What is a characteristic of VTP?

All switches in the same VTP domain forward advertisements to other switches.

19. Under which two occasions should an administrator disable DTP while managing a local area network? (Choose two.)

Cisco best practice recommends disabling DTP on links where trunking is not intended and when a Cisco switch is connected to a non-Cisco switch. DTP is required for dynamic trunk negotiation.

20. Refer to the exhibit. A network administrator is configuring inter-VLAN routing. However, the communication between VLAN 10 and VLAN 20 fails. Based on the output of the show vlan command, what is the cause of the problem? Because two physical interfaces on the router are connected to two physical ports on a switch, this is a legacy inter-VLAN configuration. With legacy inter-VLAN, the ports on the switch that are connected to the router need to be in access mode and assigned their respective VLANs. As shown in the display, these two ports are still in VLAN 1. The IP address on the router interface can be configured as needed, as long as the devices on the same VLAN are in the same network.

21. Open the PT Activity. Perform the tasks in the activity instructions and then answer the question. Fill in the blank. Do not use abbreviations.Which command is missing on the Layer 3 switch to restore the full connectivity between PC1 and the web server? (Note that typing no shutdown will not fix this problem.)

On the Layer 3 switch, an SVI has to be explicitly created for each VLAN. PC1 belongs to VLAN 10, which is already created on the Layer 3 switch and with an IP address assigned. The web server belongs to VLAN 20. The interface vlan 20 command was already entered on the Layer 3 switch, but with no IP address assigned to it. So the ip address 192.168.20.1 255.255.255.0 command has to be entered in the interface vlan 20 interface mode.​ To test the connectivity between the PC1 and the web server, access PC1, select the Desktop tab, click on the Web Browser application and enter on the URL box “www.webserver.com”. A message “Congratulations! You’ve got it!​” will be displayed.​

22. How is traffic routed between multiple VLANs on a multilayer switch?

Multilayer switches can perform inter-VLAN routing by the use of internal VLAN interfaces. External physical interfaces can receive traffic but are not necessary for routing functions. When routing between VLANs, any broadcast traffic that is received on a VLAN would remain on ports that are members of that VLAN. Subinterfaces are not usable for inter-VLAN routing on multilayer switches.

23. Refer to the exhibit. A network administrator is verifying the configuration of inter-VLAN routing. Users complain that PC2 cannot communicate with PC1. Based on the output, what is the possible cause of the problem? 25. Refer to the exhibit. After attempting to enter the configuration that is shown in router RTA, an administrator receives an error and users on VLAN 20 report that they are unable to reach users on VLAN 30. What is causing the problem?

26. Which command displays the encapsulation type, the voice VLAN ID, and the access mode VLAN for the Fa0/1 interface?

27. Question as presented: Match the DTP mode with its function. (Not all options are used.)

29. What is a characteristic of a Layer 2 loop?

30. What is the outcome of a Layer 2 broadcast storm?

31. What additional information is contained in the 12-bit extended system ID of a BPDU?

32. Which three components are combined to form a bridge ID?

33. Which STP priority configuration would ensure that a switch would always be the root switch?

34. Which protocol provides up to 16 instances of RSTP, combines many VLANs with the same physical and logical topology into a common RSTP instance, and provides support for PortFast, BPDU guard, BPDU filter, root guard, and loop guard?

35. Which two types of spanning tree protocols can cause suboptimal traffic flows because they assume only one spanning-tree instance for the entire bridged network? (Choose two.)

37. In which two port states does a switch learn MAC addresses and process BPDUs in a PVST network? (Choose two.)

38. If no bridge priority is configured in PVST, which criteria is considered when electing the root bridge?

39. Which RSTP ports are connected to end devices?

40. A network administrator is preparing the implementation of Rapid PVST+ on a production network. How are the Rapid PVST+ link types determined on the switch interfaces?

41. Which port state will switch ports immediately transition to when configured for PortFast?

42. To obtain an overview of the spanning tree status of a switched network, a network engineer issues the show spanning-tree command on a switch. Which two items of information will this command display? (Choose two.)

44. Which nonproprietary protocol provides router redundancy for a group of routers which support IPv4 LANs?

45. Refer to the exhibit. Which protocol information is being displayed in the output? 46. Refer to the exhibit. A network engineer is troubleshooting host connectivity on a LAN that uses a first hop redundancy protocol. Which IPv4 gateway address should be configured on the host?

47. Fill in the blank. Do not use abbreviations.
The spanning-tree mode rapid-pvst global configuration command is used to enable Rapid PVST+.

48. Fill in the blank.
In FHRP operation, two or more routers are represented as a single virtual router.

49. What could be the effect of duplicate unicast frames arriving at a destination device due to multiple active alternative physical paths?

50. Refer to the exhibit. Which trunk link will not forward any traffic after the root bridge election process is complete? 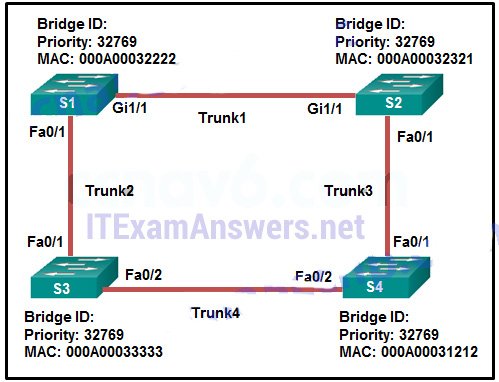 51. Which STP port role is adopted by a switch port if there is no other port with a lower cost to the root bridge?

52. Which is the default STP operation mode on Cisco Catalyst switches?

53. What value determines the root bridge when all switches connected by trunk links have default STP configurations?

54. Which two concepts relate to a switch port that is intended to have only end devices attached and intended never to be used to connect to another switch? (Choose two.)

55. Which Cisco switch feature ensures that configured switch edge ports do not cause Layer 2 loops if a port is mistakenly connected to another switch?

56. Refer to the exhibit. A network administrator configured routers R1 and R2 as part of HSRP group 1. After the routers have been reloaded, a user on Host1 complained of lack of connectivity to the Internet The network administrator issued the show standby brief command on both routers to verify the HSRP operations. In addition, the administrator observed the ARP table on Host1. Which entry should be seen in the ARP table on Host1 in order to gain connectivity to the Internet? 57. Fill in the blank. Do not abbreviate.
To enable Rapid PVST+ on a Cisco switch, the spanning-tree mode rapid-pvst global configuration mode command is required

58. Fill in the blank. Use a number.
The default hello timer value for STP BPDU frames is 2 seconds.

59. Launch PT. Hide and Save PT
Open the PT Activity. Perform the tasks in the activity instructions and then answer the question.
Which switch is the root bridge?​ 60. Match the step number to the sequence of stages that occur during the HSRP failover process.

61. Match the spanning-tree feature with the protocol type. (Not all options are used.)

I passed CCNA, make mistakes, study hard and good resources. Thanks so much.

Refer to the exhibit. A network administrator is configuring inter-VLAN routing. However, the communication between VLAN 10 and VLAN 20 fails. Based on the output of the show vlan command, what is the cause of the problem?