1. The buffers for packet processing and the running configuration file are temporarily stored in which type of router memory?

2. How does implementing STP allow for a scalable network design?

4. What is a characteristic of a default static route?​

If a trunk is in dynamic desirable on either side of a trunk link, a trunk will form. The other trunking combinations will not form trunk links.

6. On which switch interface would an administrator configure an IP address so that the switch can be managed remotely?

7. Which statement describes a route that has been learned dynamically?

8. Refer to the exhibit. Which switch will be the root bridge after the election process is complete? 10. In addition to the cable length, what two factors could interfere with the communication carried over UTP cables? (Choose two.)

11. Which information does a switch use to keep the MAC address table information current?

To maintain the MAC address table, the switch uses the source MAC address of the incoming packets and the port that the packets enter. The destination address is used to select the outgoing port.

12. A network engineer has been tasked with connecting two large autonomous systems (AS) together over the Internet. Which routing protocol should be selected?

Large companies commonly interconnect multiple autonomous systems using an EGP. Border Gateway Protocol (BGP) is an EGP and is the routing protocol used by routers on the Internet.

13. What important information is examined in the Ethernet frame header by a Layer 2 device in order to forward the data onward?

The Layer 2 device, such as a switch, uses the destination MAC address to determine which path (interface or port) should be used to send the data onward to the destination device.

14. What are two reasons to implement passive interfaces in the EIGRP configuration of a Cisco router? (Choose two.)

Two primary reasons for implementing passive interfaces in EIGRP routing are to suppress unnecessary update traffic, such as when an interface is a LAN interface with no other routers connected, and to increase security controls, such as preventing unknown rogue routing devices from receiving EIGRP updates.

15. Which two functions are primary functions of a router? (Choose two.)

16. Which two devices allow hosts on different VLANs to communicate with each other? (Choose two.)

17. An EIGRP router loses the route to a network. Its topology table contains two feasible successors to the same network. What action will the router take?

18. What three blocks of addresses are defined by RFC 1918 for private network use? (Choose three.)

21. Which criterion is preferred by the router to choose a router ID?

22. A network administrator is entering the command ipv6 unicast-routing to start configuring DHCPv6 operation on a router. Which statement describes the function of this command?

The ipv6 unicast-routing command is required to enable IPv6 routing on a router. This command is not necessary for the router to be a stateless or stateful DHCPv6 server, but is required for sending ICMPv6 RA messages.

23. What three services are provided by the transport layer? (Choose three.)

The transport layer is responsible for tracking digital conversations between a source application and a destination application through the use of port numbers. Two protocols that operate at the transport layer are TCP and UDP. TCP can provide reliability by establishing a connection, maintaining flow control, and error recovery.

24. Which TCP/IP model layer is closest to the end user?

25. When applied to a router, which command would help mitigate brute-force password attacks against the router?

The login block-for command sets a limit on the maximum number of failed login attempts allowed within a defined period of time. If this limit is exceeded, no further logins are allowed for the specified period of time. This helps to mitigate brute-force password cracking since it will significantly increase the amount of time required to crack a password. The exec-timeout command specifies how long the session can be idle before the user is disconnected. The service password-encryption command encrypts the passwords in the running configuration. The banner motd command displays a message to users who are logging in to the device.

26. Which circumstance would result in an enterprise deciding to implement a corporate WAN?

WANs cover a greater geographic area than LANs do, so having employees distributed across many locations would require the implementation of WAN technologies to connect those locations. Customers will access corporate web services via a public WAN that is implemented by a service provider, not by the enterprise itself. When employee numbers grow, the LAN has to expand as well. A WAN is not required unless the employees are in remote locations. LAN security is not related to the decision to implement a WAN.

27. A corporation is searching for an easy and low cost solution to provide teleworkers with a secure connection to headquarters. Which solution should be selected?

A remote access VPN over the Internet is an appropriate solution to meet the requirement for secure connections to individual teleworkers. Site-to-site VPNs are used to connect between offices. Leased lines are very expensive for multiple teleworkers. A dial-up connection is very slow and the corporation needs to maintain a facility (a bank of access servers) to handle multiple simultaneous dial-up connections.

28. Which three statements are true about PPP? (Choose three.)

29. A network administrator is configuring a PPP link with the commands:
R1(config-if)# encapsulation ppp
R1(config-if)# ppp quality 70
What is the effect of these commands?

LCP provides an option to monitor the link quality. The command ppp quality percentage ensures that the link meets the quality requirement set; otherwise the link closes down.

30. What is the protocol that provides ISPs the ability to send PPP frames over DSL networks?

PPPoE was developed as a solution for ISPs that wanted to the benefits of PPP connections over their DSL networks. Point-to-Point Protocol over Ethernet, PPPoE, allows PPP frames to be encapsulated and sent over Ethernet.

31. Refer to the exhibit. All routers are successfully running the BGP routing protocol. How many routers must use EBGP in order to share routing information across the autonomous systems?

External BGP (EBGP) is used between routers that must communicate with routers that are in a different autonomous system (AS).

32. Which three values or sets of values are included when creating an extended access control list entry? (Choose three.)

33. Which pillar of the Cisco IoT System allows data to be analyzed and managed at the location where it is generated?

34. What two protocols are supported on Cisco devices for AAA communications? (Choose two.)

35. What guideline is generally followed about the placement of extended access control lists?

36. What network monitoring tool copies traffic moving through one switch port, and sends the copied traffic to another switch port for analysis?

The Switched Port Analyzer (SPAN) feature of Cisco switches allows traffic that is coming into or out of a switch port to be copied to a different port so that it can be collected and analyzed with network monitoring software.

38. Which type of QoS marking is applied to Ethernet frames?

The class of service (CoS) marking allows a Layer 2 Ethernet frame to be marked with eight levels of priority (values 0–7). This marking can be used by QoS-enabled network devices to provide preferential traffic treatment.

39. Users are reporting longer delays in authentication and in accessing network resources during certain time periods of the week. What kind of information should network engineers check to find out if this situation is part of a normal network behavior?

The network engineers should first establish that the reported performance of the network is in fact abnormal. This is done by referring to the documented network performance baseline.Once it has been verified that the network is not having a proper performance, then specific troubleshooting processes can be applied.

40. Which feature sends simulated data across the network and measures performance between multiple network locations?

41. When is a dial-up connection used to connect to an ISP?

42. Why would a network administrator use the tracert utility?

43. Refer to the exhibit. Which type of IPv6 static route is configured in the exhibit?

44. Which range of link-local addresses can be assigned to an IPv6-enabled interface?

45. A high school in New York (school A) is using videoconferencing technology to establish student interactions with another high school (school B) in Russia. The videoconferencing is conducted between two end devices through the Internet. The network administrator of school A configures the end device with the IP address 192.168.25.10. The administrator sends a request for the IP address for the end device in school B and the response is 192.168.25.10. The administrator knows immediately that this IP will not work. Why?

46. What field content is used by ICMPv6 to determine that a packet has expired?

48. Which two conditions would cause a router to drop a packet? (Choose two.)

49. Which definition describes a supernet route?

50. Refer to the exhibit. Which route or routes will be advertised to the router ISP if autosummarization is enabled?

51. Which information does a switch use to populate the MAC address table?

52. What is the purpose of setting the native VLAN separate from data VLANs?

53. A network contains multiple VLANs spanning multiple switches. What happens when a device in VLAN 20 sends a broadcast Ethernet frame?

54. Which security mode is the least secure choice when a home wireless router is configured?

55. Refer to the exhibit. The IPv6 access list LIMITED_ACCESS is applied on the S0/0/0 interface of R1 in the inbound direction. Which IPv6 packets from the ISP will be dropped by the ACL on R1? 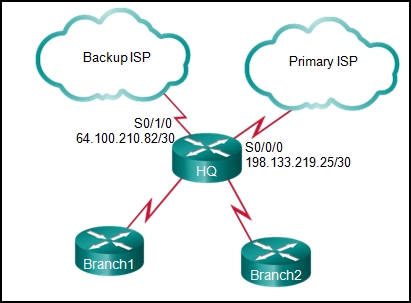 57. What is the most likely scenario in which the WAN interface of a router would be configured as a DHCP client to be assigned a dynamic IP address from an ISP? 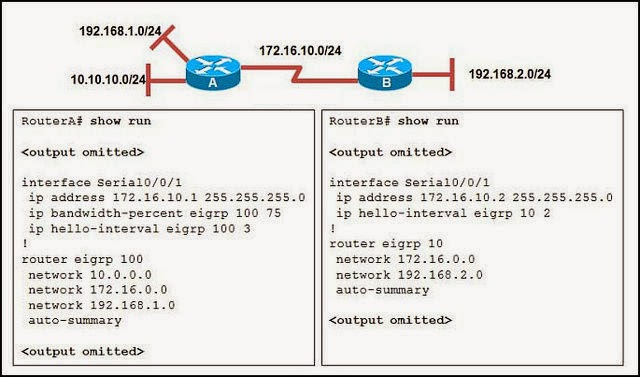 60. Refer to the exhibit. NAT with overload is configured on router R1 and uses the NAT pool of addresses 209.165.201.9 through 209.165.201.10. What type of route would the ISP need in order for communication to occur between hosts in Company ABC and the Internet?

61. A network administrator enters the command ipv6 router ospf 64 in global configuration mode. What is the result of this command?

62. Which three statements describe the similarities between OSPFv2 and OSPFv3? (Choose three.)

63. Match the description to the access method. (Not all options are used.)

64. Match each description with the corresponding TCP mechanism. (Not all options are used.) 65. Match the description with the correct category. (Not all options are used.)

66. Refer to the exhibit. R1 is configured for NAT as displayed. What is wrong with the configuration? 67. Which two statements about NetFlow are true? (Choose two.)

69. What are three benefits of using Frame Relay for WAN connectivity? (Choose three.)

70. What is one advantage to designing networks in building block fashion for large companies?

71. What is an IPsec protocol that provides data confidentiality and authentication for IP packets?

72. Refer to the exhibit. Which two statements describe the results of entering these commands? (Choose two.)

73. Refer to the exhibit. Based on the output that is shown, what type of NAT has been implemented?

75. What are two advantages of packet switching over circuit switching? (Choose two.)

76. Which two components of a WAN would more likely be used by an ISP? (Choose two.)

78. What is the protocol that provides ISPs the ability to send PPP frames over DSL networks?

79. Fill in the blank.
IPsec operates at the network layer of the OSI model.

80. Match the characteristic to the correct PPP authentication protocol. (Not all options are used.)