1. Which statement describes the port speed LED on the Cisco Catalyst 2960 switch?

2. Which command is used to set the BOOT environment variable that defines where to find the IOS image file on a switch?

The boot system command is used to set the BOOT environment variable. The config-register and confreg commands are used to set the configuration register. The boot loader command supports commands to format the flash file system, reinstall the operating system software, and recover from a lost or forgotten password.

3. What is a function of the switch boot loader?

4. Which interface is the default location that would contain the IP address used to manage a 24-port Ethernet switch?

5. A production switch is reloaded and finishes with a Switch> prompt. What two facts can be determined? (Choose two.)

7. In which situation would a technician use the show interfaces switch command?

The show interfaces command is useful to detect media errors, to see if packets are being sent and received, and to determine if any runts, giants, CRCs, interface resets, or other errors have occurred. Problems with reachability to a remote network would likely be caused by a misconfigured default gateway or other routing issue, not a switch issue. The show mac address-table command shows the MAC address of a directly attached device.

8. Refer to the exhibit. A network technician is troubleshooting connectivity issues in an Ethernet network with the command show interfaces fastEthernet 0/0. What conclusion can be drawn based on the partial output in the exhibit? The partial output shows that there are 50 giants (frames longer than the allowed maximum) that were injected into the network, possibly by a malfunctioning NIC. This conclusion can be drawn because there are only 25 collisions, so not all the 50 giants are the result of a collision. Also, because there 25 collisions, it is most likely that not all hosts are using full-duplex mode (otherwise there would not be any collisions). There should be no cabling issues since the CRC error value is 0. There are 0 runts, so the collisions have not caused malformed frames to occur that are shorter than 64 bytes in length .

9. Refer to the exhibit. What media issue might exist on the link connected to Fa0/1 based on the show interface command? 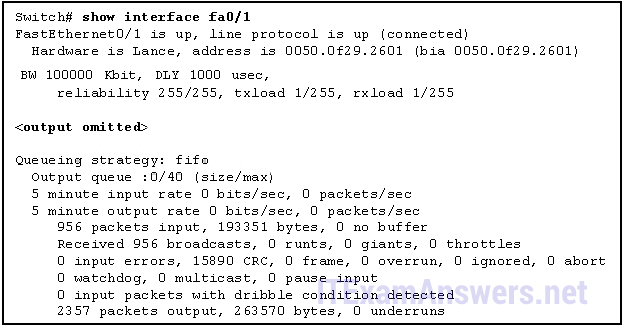 Escalating CRC errors usually means that the data is being modified during transmission from the host to the switch. This is often caused by high levels of electromagnetic interference on the link.

Full-duplex communications do not produce collisions. However, collisions often occur in half-duplex operations. When a connection has two different duplex configurations, the half-duplex end will experience late collisions. Collisions are found on Ethernet networks. Serial interfaces use technologies other than Ethernet.

11. What is one difference between using Telnet or SSH to connect to a network device for management purposes?

13. What is the effect of using the switchport port-security command?

Port security cannot be enabled globally. All active switch ports should be manually secured using the switchport port-security command, which allows the administrator to control the number of valid MAC addresses allowed to access the port. This command does not specify what action will be taken if a violation occurs, nor does it change the process of populating the MAC address table.

14. Where are dynamically learned MAC addresses stored when sticky learning is enabled with the switchport port-security mac-address sticky command?

15. A network administrator configures the port security feature on a switch. The security policy specifies that each access port should allow up to two MAC addresses. When the maximum number of MAC addresses is reached, a frame with the unknown source MAC address is dropped and a notification is sent to the syslog server. Which security violation mode should be configured for each access port?

17. Which action will bring an error-disabled switch port back to an operational state?

When a violation occurs on a switch port that is configured for port security with the shutdown violation action, it is put into the err-disabled state. It can be brought back up by shutting down the interface and then issuing the no shutdown command.

18. Refer to the exhibit. Port Fa0/2 has already been configured appropriately. The IP phone and PC work properly. Which switch configuration would be most appropriate for port Fa0/2 if the network administrator has the following goals? No one is allowed to disconnect the IP phone or the PC and connect some other wired device.
If a different device is connected, port Fa0/2 is shut down.
The switch should automatically detect the MAC address of the IP phone and the PC and add those addresses to the running configuration. The Port Security line simply shows a state of Enabled if the switchport port-security command (with no options) has been entered for a particular switch port. If a port security violation had occurred, a different error message appears such as Secure-shutdown. The maximum number of MAC addresses supported is 50. The Maximum MAC Addresses line is used to show how many MAC addresses can be learned (2 in this case). The Sticky MAC Addresses line shows that only one device has been attached and learned automatically by the switch. This configuration could be used when a port is shared by two cubicle-sharing personnel who bring in separate laptops.

20. Refer to the exhibit. Which event will take place if there is a port security violation on switch S1 interface Fa0/1?

21. Open the PT Activity. Perform the tasks in the activity instructions and then answer the question.
Which event will take place if there is a port security violation on switch S1 interface Fa0/1? 23. Match the step to each switch boot sequence description. (Not all options are used.)

24. Identify the steps needed to configure a switch for SSH. The answer order does not matter. (Not all options are used.)

Place the options in the following order:
[+] Create a local user.
[+] Generate RSA keys.
[+] Configure a domain name.
[+] Use the login local command.
[+] Use the transport input ssh command.
[+] Order does not matter within this group.

25. What is a disadvantage of using router-on-a-stick inter-VLAN routing?

26. How is traffic routed between multiple VLANs on a multilayer switch?

27. Refer to the exhibit. In this network design, which connection or connections if any, add the VLAN ID number if host H1 sends information to host H2? 28. What is a characteristic of legacy inter-VLAN routing?

29. Refer to the exhibit. A network administrator needs to configure router-on-a-stick for the networks that are shown. How many subinterfaces will have to be created on the router if each VLAN that is shown is to be routed and each VLAN has its own subinterface? Explanation: Based on the IP addresses and masks given, the PC, printer, IP phone, and switch management VLAN are all on different VLANs. This situation will require four subinterfaces on the router.

30. Refer to the exhibit. In what switch mode should port G0/1 be assigned if Cisco best practices are being used? 31. Refer to the exhibit. What is the problem with this configuration, based on the output of the router? 32. Refer to the exhibit. Communication between the VLANs is not occurring. What could be the issue?

33. Refer to the exhibit. A network administrator is verifying the configuration of inter-VLAN routing. Users complain that PCs on different VLANs cannot communicate. Based on the output, what are two configuration errors on switch interface Gi1/1? (Choose two.) Explanation: With legacy inter-VLAN routing methods, the switch ports that connect to the router should be configured as access mode and be assigned appropriate VLANs. In this scenario, the Gi1/1 interface should be in access mode with VLAN 10 assigned. The other options are default settings on the switch and have no effect on legacy inter-VLAN routing.

34. Refer to the exhibit. A network administrator is verifying the configuration of inter-VLAN routing. Users complain that PC2 cannot communicate with PC1. Based on the output, what is the possible cause of the problem? 35. Refer to the exhibit. A network administrator is verifying the configuration of inter-VLAN routing. Based on the partial output that is displayed by the use of the show vlan command, which conclusion can be drawn for the Gi1/1 interface?

37. How are IP addressing designs affected by VLAN implementations?

38. While configuring inter-VLAN routing on a multilayer switch, a network administrator issues the no switchport command on an interface that is connected to another switch. What is the purpose of this command?

39. What is a disadvantage of using multilayer switches for inter-VLAN routing?

40. What is a characteristic of a routed port on a Layer 3 switch?

42. Which statement describes a disadvantage of using router subinterfaces for inter-VLAN routing?

44. Refer to the exhibit. After attempting to enter the configuration that is shown in router RTA, an administrator receives an error and users on VLAN 20 report that they are unable to reach users on VLAN 30. What is causing the problem?

45. Refer to the exhibit. A network administrator is configuring RT1 for inter-VLAN routing. The switch is configured correctly and is functional. Host1, Host2, and Host3 cannot communicate with each other. Based on the router configuration, what is causing the problem? 46. What condition is required to enable Layer 3 switching?

47. Refer to the exhibit. Which command can the administrator issue to change the VLAN10 status to up?​ 48. Fill in the blank. Do not use abbreviations.
A network engineer is troubleshooting the configuration of new VLANs on a network. ​Which command is used to display the list of VLANs that exists on the switch? show vlan

49. Refer to the exhibit. The switch does the routing for the hosts that connect to VLAN 5. If the PC accesses a web server from the Internet, at what point will a VLAN number be added to the frame? 50. Which type of inter-VLAN communication design requires the configuration of multiple subinterfaces?

Explanation: The router-on-a-stick design always includes subinterfaces on a router. When a multilayer switch is used, multiple SVIs are created. When the number of VLANs equals the number of ports on a router, or when the management VLAN needs to be routed, any of the inter-VLAN design methods can be used.

51. A small college uses VLAN 10 for the classroom network and VLAN 20 for the office network. What is needed to enable communication between these two VLANs while using legacy inter-VLAN routing? 54. Match the link state to the interface and protocol status. (Not all options are used.)
(Match in the following problems with interface statements:)

55. Match the inter-VLAN routing method to the corresponding characteristic (not all options are used).

Place the options in the following order:
router-on-a-stick -> creation of subinterfaces
Layer 3 with SVIs -> routing at wire speeds
– not scored –
Layer 3 with routed ports -> need to issue the no switchport command

56. Open the PT Activity. Perform the tasks in the activity instructions and then answer the question. Fill in the blank. Do not use abbreviations.Which command is missing on the Layer 3 switch to restore the full connectivity between PC1 and the web server? (Note that typing no shutdown will not fix this problem.)

The computer on F0/1 has been disconnected, and new laptop is connected, which event will take place if port security violation is configured on the switch interface Fa0/1 as per the given figure?

The order for the SSH configuration question is wrong. I just took the test and got 100%. In the curriculum, 5.2.1.2 shows the correct order should be:
[1] Configure a domain name.
[2] Generate RSA keys.
[3] Create a local user.
[4] Use the login local command.
[5] Use the transport input ssh command.