1. By default, what is the OSPF cost for any link with a bandwidth of 100 Mb/s or greater?

2. Which command will verify that a router that is running OSPFv3 has formed an adjacency with other routers in its OSPF area?

The show ipv6 ospf neighbor command will verify neighbor adjacencies for OSPFv3 routers. The other options do not provide neighbor information.

3. Which OSPF component is identical in all routers in an OSPF area after convergence?

Each OSPF router views the network differently as the root of a unique SPF tree. Each router builds adjacencies based on its own position in the topology. Each routing table in the area is developed individually through the application of the SPF algorithm. The link-state database for an area, however, must reflect the same information for all routers.

4. Which OPSF packet contains the different types of link-state advertisements?

5. Which three addresses could be used as the destination address for OSPFv3 messages? (Choose three.)

The OSPF metric is cost. The lowest cost path to a remote destination is the preferred path and is installed in the routing table.

7. What are the two purposes of an OSPF router ID? (Choose two.)

OSPF router ID does not contribute to SPF algorithm calculations, nor does it facilitate the transition of the OSPF neighbor state to Full. Although the router ID is contained within OSPF messages when router adjacencies are being established, it has no bearing on the actual convergence process.

8. A network administrator enters the command ipv6 router ospf 64 in global configuration mode. What is the result of this command?

The basic command to implement OSPFv3 on a router uses the same process-id parameter as OSPFv2 to assign a locally-significant number to the OSPF process. OSPF does not use autonomous system numbers. Following the assignment of the process ID, a prompt will direct the user to manually assign a router ID. After the router ID is assigned, the reference bandwidth can be set.

9. What happens immediately after two OSPF routers have exchanged hello packets and have formed a neighbor adjacency?

10. Open the PT Activity. Perform the tasks in the activity instructions and then complete the task. What message is displayed on www.ciscoville.com?

11. What are two reasons that will prevent two routers from forming an OSPFv2 adjacency? (Choose two.)

There may be several reasons why two routers running OSPF will fail to form an OSPF adjacency, including these:
The subnet masks do not match, causing the routers to be on separate networks.
OSPF Hello or Dead Timers do not match.
OSPF network types do not match.
There is a missing or incorrect OSPF network command.
Mismatched IOS versions, the use of private IP addresses, and different types of interface ports used on a switch are not causes for an OSPF adjacency failing to form between two routers.

12. What does a Cisco router use automatically to create link-local addresses on serial interfaces when OSPFv3 is implemented?

Since serial interfaces do not have MAC addresses, OSPFv3 automatically assigns a link-local address to them derived from the first available MAC address from the pool of Ethernet interface addresses on the router. A FE80::/10 prefix is added. The router then applies the EUI-64 process to the MAC address by inserting FFFE into the middle of the existing 48-bit address and flipping the seventh bit.

13. Single area OSPFv3 has been enabled on a router via the ipv6 router ospf 20 command. Which command will enable this OSPFv3 process on an interface of that router?

The command to enable an OSPFv3 process on a router interface is ipv6 ospf process-id area area-id. In the case the process ID is 20 and the area ID is 0.

14. Fill in the blank.The election of a DR and a BDR takes place on _________ networks, such as Ethernet networks.
Correct Answer: multiaccess


There is no need to have a DR/BDR election on a point-to-point link.

15. Which command will provide information specific to OSPFv3 routes in the routing table?

16. Which command should be used to check the OSPF process ID, the router ID, networks the router is advertising, the neighbors the router is receiving updates from, and the default administrative distance?

17. What is the metric that is used by OSPF?

18. What function is performed by the OSPF designated router?

OSPF designated routers are elected on multiaccess networks to disseminate LSAs to other OSPF routers. By having a single router disseminate LSAs, the exchanging of LSAs is more efficient.

19. What is used to create the OSPF neighbor table?

21. What will an OSPF router prefer to use first as a router ID?

The first preference for an OSPF router ID is an explicitly configured 32-bit address. This address is not included in the routing table and is not defined by the network command. If a router ID that is configured through the router-id command is not available, OSPF routers next use the highest IP address available on a loopback interface, as loopbacks used as router IDs are also not routable addresses. Lacking either of these alternatives, an OSPF router will use the highest IP address from its active physical interfaces.

22. Match the OSPF state with the order in which it occurs. (Not all options are used.) 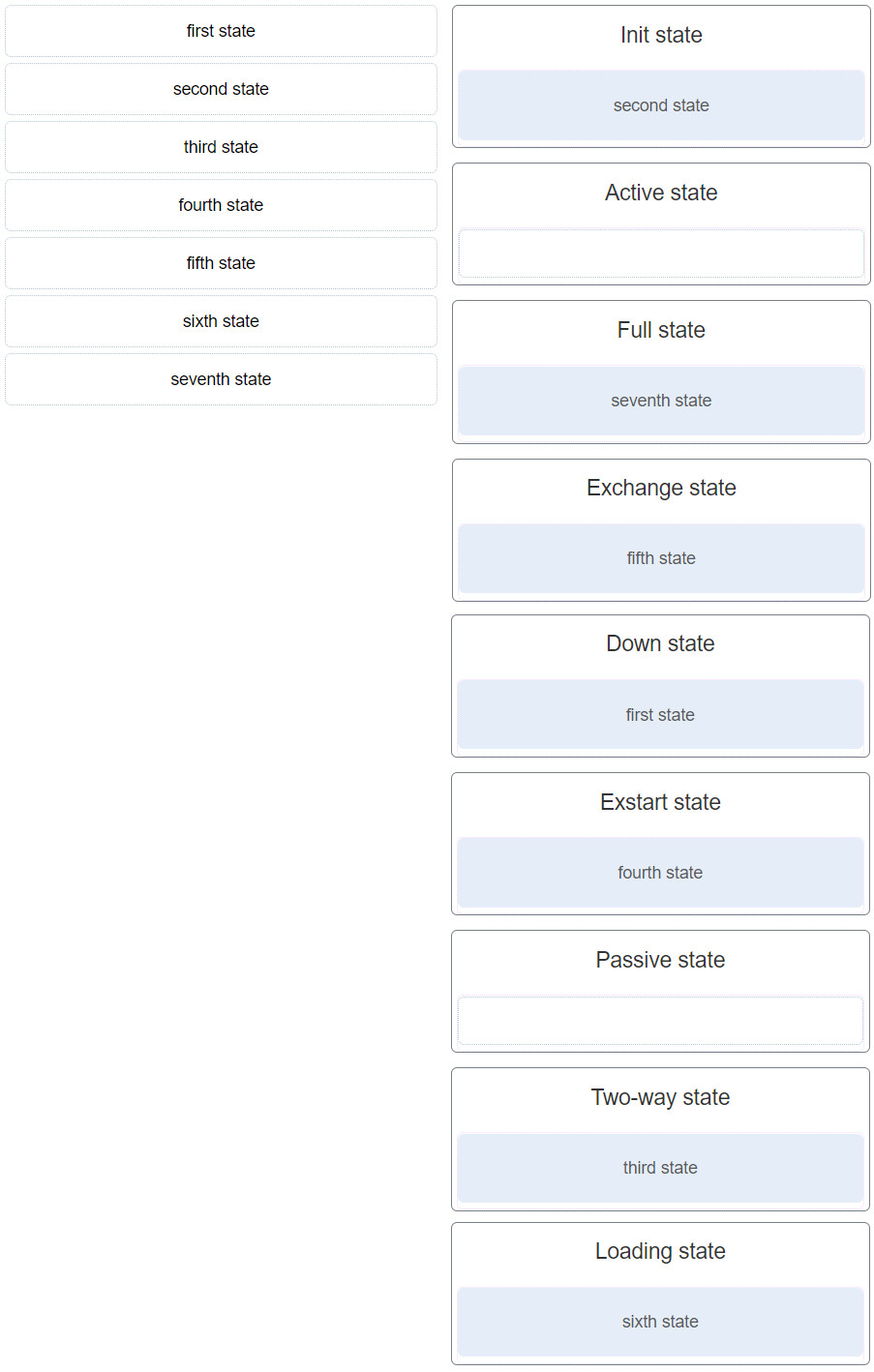 The active and passive states are used by EIGRP.

23. Match each OSPF packet type to how it is used by a router. (Not all options are used.)

24. By order of precedence, match the selection of router ID for an OSPF-enabled router to the possible router ID options. (Not all options are used.)

26. Refer to the exhibit. All networks are active in the same EIGRP routing domain. When the auto-summary command is issued on R3, which two summary networks will be advertised to the neighbors? (Choose two.) 27. Refer to the exhibit. Router R3 is receiving multiple routes through the EIGRP routing protocol. Which statement is true about the implementation of summarization in this network?

28. Refer to the exhibit. Which statement is supported by the output?

30. Refer to the exhibit. Which two routes will be advertised to the router ISP if autosummarization is disabled? (Choose two.) 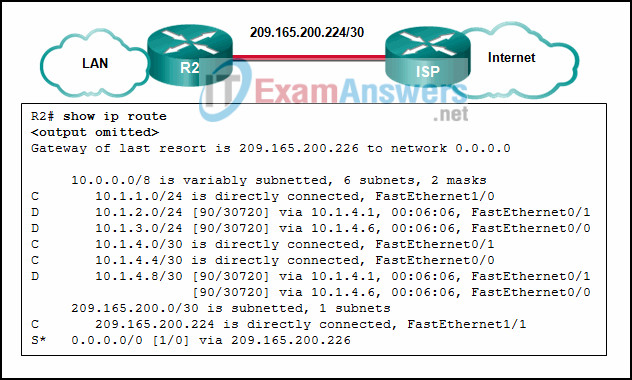 32. What is a characteristic of manual route summarization?

33. Refer to the exhibit. Which statement accurately reflects the configuration of routing on the HQ router?

35. In which IOS CLI mode must a network administrator issue the maximum-paths command to configure load balancing in EIGRP?

36. Two routers, R1 and R2, share a 64 kb/s link. An administrator wants to limit the bandwidth used by EIGRP between these two routers to 48 kb/s. Which command is used on both routers to configure the new bandwidth setting? 38. Refer to the exhibit. A network administrator has configured EIGRP authentication between routers R1 and R2. After the routing tables are reviewed, it is noted that neither router is receiving EIGRP updates. What is a possible cause for this failure?

39. Two routers, R1 and R2, have established an EIGRP neighbor relationship, but there is still a connectivity problem. Which issue could be causing this problem? 41. Refer to the exhibit. After the configuration shown is applied on router R1, the exhibited status message is displayed. Router R1 is unable to form a neighbor relationship with R2 on the serial 0/1/0 interface. What is the most likely cause of this problem? 43. Fill in the blank. Do not use abbreviations.
The passive-interface command causes an EIGRP router to stop sending hello packets through an interface.

44. What is the purpose of a Null0 route in the routing table?

45. Which administrative distance is used to advertise routes learned from other protocols that are redistributed into EIGRP?

Explanation: Routes learned from other routing protocols that are redistributed into EIGRP are known as external routes and are assigned an administrative distance of 170.

46. Refer to the exhibit. Which two conclusions can be drawn from the exhibited configuration? (Choose two.)

47. Which command would limit the amount of bandwidth that is used by EIGRP for protocol control traffic to approximately 128 Kb/s on a 1.544 Mb/s link?

48. By default, how many equal-cost routes to the same destination network will EIGRP install in the routing table?

49. Refer to the exhibit. Router CiscoVille has been partially configured for EIGRP authentication. What is missing that would allow successful authentication between EIGRP neighbors?

50. What two statements are correct regarding EIGRP authentication? (Choose two.)

51. Which EIGRP parameter must match between all routers forming an EIGRP adjacency?

52. Which command can be issued on a router to verify that automatic summarization is enabled?

53. Fill in the blank. Do not use abbreviations.
What is the command that should be issued on a router to verify that EIGRP adjacencies were formed?​ show ip eigrp neighbors

54. Open the PT Activity. Perform the tasks in the activity instructions and then answer the question.
R1 and R2 could not establish an EIGRP adjacency. What is the problem?​

55. Refer to the exhibit. Considering that R2, R3, and R4 are correctly configured, why did R1 not establish an adjacency with R2, R3, and R4? 56. In which scenario will the use of EIGRP automatic summarization cause inconsistent routing in a network?

57. Which OSPF data structure is identical on all OSPF routers that share the same area?

58. Which command will selectively display IPv6 routes that are learned from a remote network?

Which OSPF data structure is identical on all OSPF routers that share the same area?

Which command will selectively display IPv6 routes that are learned from a remote network?