2. The application layer of the TCP/IP model performs the functions of what three layers of the OSI model? (Choose three.)

3. Which layer in the TCP/IP model is used for formatting, compressing, and encrypting data?

4. What are two characteristics of the application layer of the TCP/IP model? (Choose two.)

Explain:
The application layer of the TCP/IP model is the layer that is closest to the end user, providing the interface between the applications. It is responsible for formatting, compressing, and encrypting data, and is used to create and maintain dialog between source and destination applications.

5. A manufacturing company subscribes to certain hosted services from its ISP. The services that are required include hosted world wide web, file transfer, and e-mail. Which protocols represent these three key applications? (Choose three.)

6. What is an example of network communication that uses the client-server model?

Explain:
When a user types a domain name of a website into the address bar of a web browser, a workstation needs to send a DNS request to the DNS server for the name resolution process. This request is a client/server model application. The eMule application is P2P. Sharing a printer on a workstation is a peer-to-peer network. Using ARP is just a broadcast message sent by a host.

Explain:
In a peer-to-peer (P2P) networking model, data is exchanged between two network devices without the use of a dedicated server. ​​

8. What do the client/server and peer-to-peer network models have in common?

9. What is an advantage for small organizations of adopting IMAP instead of POP?

Explain:
IMAP and POP are protocols that are used to retrieve email messages. The advantage of using IMAP instead of POP is that when the user connects to an IMAP-capable server, copies of the messages are downloaded to the client application. IMAP then stores the email messages on the server until the user manually deletes those messages.

10. Which application layer protocol uses message types such as GET, PUT, and POST?

11. When retrieving email messages, which protocol allows for easy, centralized storage and backup of emails that would be desirable for a small- to medium-sized business?

Explain:
IMAP is preferred for small-to medium-sized businesses as IMAP allows centralized storage and backup of emails, with copies of the emails being forwarded to clients. POP delivers the emails to the clients and deletes them on the email server. SMTP is used to send emails and not to receive them. HTTPS is not used for secure web browsing.

12. What is the function of the Nslookup utility?

Explain:Nslookup is a command-line utility that is used to send a query to DNS servers to resolve a specific host name to an IP address.

13. What message type is used by an HTTP client to request data from a web server?

14. Which protocol is used by a client to communicate securely with a web server?

Explain:HTTPS is a secure form of HTTP used to access web content hosted by a web server.

Explain:
When a host configured to use DHCP powers up on a network it sends a DHCPDISCOVER message. FF-FF-FF-FF-FF-FF is the L2 broadcast address. A DHCP server replies with a unicast DHCPOFFER message back to the host.

16. What part of the URL, http://www.cisco.com/index.html, represents the top-level DNS domain?

Explain:
The components of the URL http://www.cisco.com/index.htm are as follows:
http = protocol
www = part of the server name
cisco = part of the domain name
index = file name
com = the top-level domain

17. Which two tasks can be performed by a local DNS server? (Choose two.)

Explain:
Two important functions of DNS are to (1) provide IP addresses for domain names such as www.cisco.com, and (2) forward requests that cannot be resolved to other servers in order to provide domain name to IP address translation. DHCP provides IP addressing information to local devices. A file transfer protocol such as FTP, SFTP, or TFTP provides file sharing services. IMAP or POP can be used to retrieve an email message from a server.

18. Which phrase describes an FTP daemon?

Explain:
An FTP server runs an FTP daemon, which is a program that provides FTP services. End users who request services must run an FTP client program.

19. Which statement is true about FTP?

Explain:
FTP is a client/server protocol. FTP requires two connections between the client and the server and uses TCP to provide reliable connections. With FTP, data transfer can happen in either direction. The client can download (pull) data from the server or upload (push) data to the server.

20. What is true about the Server Message Block protocol?

Explain:
The Server Message Block protocol is a protocol for file, printer, and directory sharing. Clients establish a long term connection to servers and when the connection is active, the resources can be accessed. Every SMB message has the same format. The use of SMB differs from FTP mainly in the length of the sessions. SMB messages can authenticate sessions.

21. Which application layer protocol is used to provide file-sharing and print services to Microsoft applications?

Explain:
SMB is used in Microsoft networking for file-sharing and print services. The Linux operating system provides a method of sharing resources with Microsoft networks by using a version of SMB called SAMBA.

22. Fill in the blank.
What is the acronym for the protocol that is used when securely communicating with a web server? HTTPS

23. Fill in the blank.
The HTTP message type used by the client to request data from the web server is the GET message.

Explain:
GET is one of the message types used by HTTP. A client (web browser) sends the GET message to the web server to request HTML pages.​ Perform the tasks in the activity instructions and then answer the question.Which PC or PCs are sending FTP packets to the server?

Explain:
After you view the details of the packets that are being transferred between each PC and the server, you will see that the PC that is using a destination port number of 20 or 21 is the PC using the FTP service. PC_2 has an outbound port number of 21 to create an FTP control session with the server at 192.168.1.253. Refer to the exhibit. What command was used to resolve a given host name by querying the name servers?
nslookup


Explain:
A user can manually query the name servers to resolve a given host name using the nslookup command.​ Nslookup is both a command and a utility.​

26. Match a statement to the related network model. (Not all options are used.)

Place the options in the following order:peer-to-peer network
[+] no dedicated server is required
[+] client and server roles are set on a per request basis
peer-to-peer aplication
[#] requires a specific user interface
[#] a background service is required


Explain:
Peer-to-peer networks do not require the use of a dedicated server, and devices can assume both client and server roles simultaneously on a per request basis. Because they do not require formalized accounts or permissions, they are best used in limited situations. Peer-to-peer applications require a user interface and background service to be running, and can be used in more diverse situations.

27. Match the functions to the name of the application. (Not all options are used.)

28. Which three layers of the OSI model provide similar network services to those provided by the application layer of the TCP/IP model? (Choose three.)

29. Which two tasks are functions of the presentation layer? (Choose two.)

30. Select three protocols that operate at the Application Layer of the OSI model. (Choose three.)

32. What are two characteristics of peer-to-peer networks? (Choose two.)

33. Which two actions are taken by SMTP if the destination email server is busy when email messages are sent? (Choose two.)

34. A DHCP-enabled client PC has just booted. During which two steps will the client PC use broadcast messages when communicating with a DHCP server? (Choose two.)

35. A user accessed the game site www.nogamename.com last week. The night before the user accesses the game site again, the site administrator changes the site IP address. What will be the consequence of that action for the user?

36. Which DNS server in the DNS hierarchy would be considered authoritative for the domain name records of a company named netacad?

37. When would it be more efficient to use SMB to transfer files instead of FTP?

38. Fill in the blank.
What is the acronym for the protocol that is used when securely communicating with a web server? HTTPS


Hypertext Transfer Protocol Secure (HTTPS) is the protocol that is used for accessing or posting web server information using a secure communication channel.

39. Match the DNS record type to the corresponding description. (Not all options are used.)

40. Match the purpose with its DHCP message type. (Not all options are used.)

41. Open the PT activity. Perform the tasks in the activity instructions and then answer the question.
What is the application layer service being requested from Server0 by PC0? 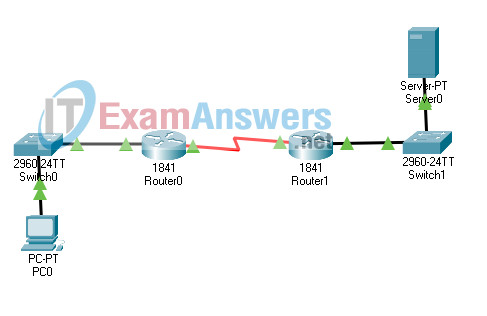 In the Simulation mode, capture the packets. What is the application layer service being requested from Server0 by PC0?
Return to the assessment to answer the question. 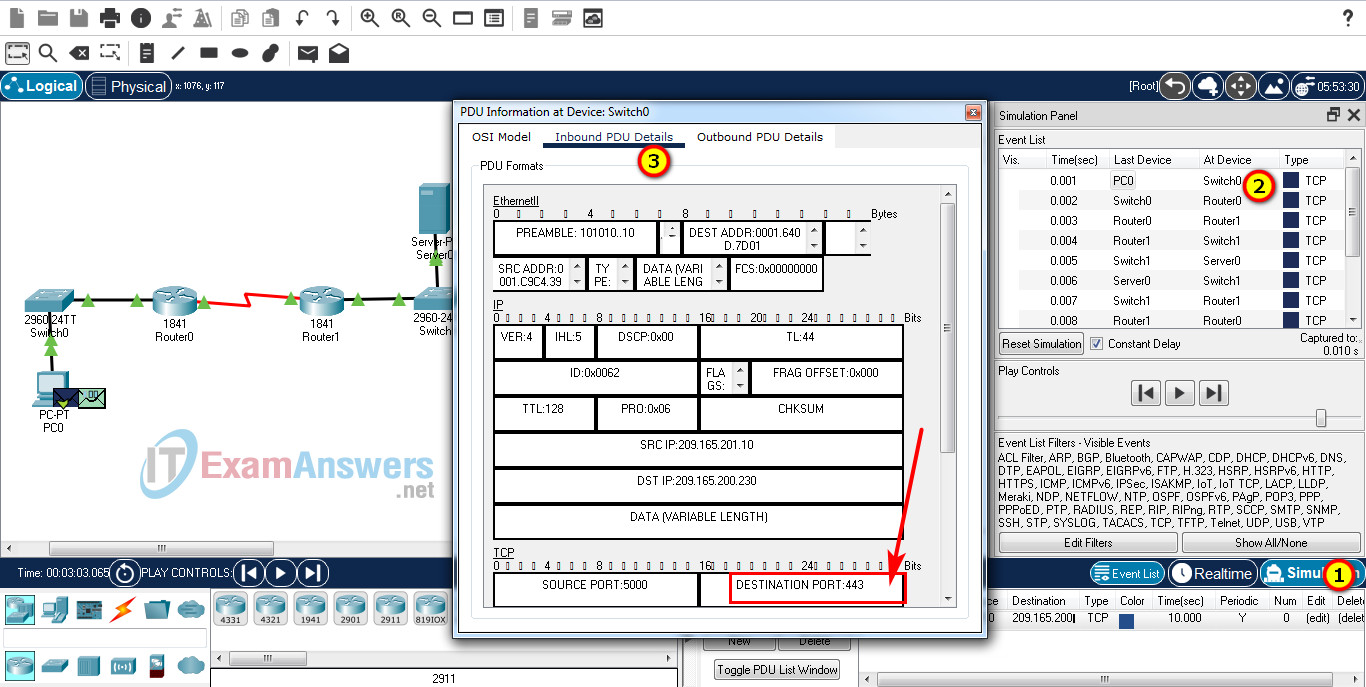 Open the PT activity. Perform the tasks in the activity instructions and then answer the question.

What is the application layer service being requested from Server0 by PC0?

Which protocol or service allows network administrators to receive system messages that are provided by network devices?

very helpfull ,thank you so much

Something like that I have to be a good day today