1. A computer in a given network is communicating with a specific group of computers. What type of communication is this?

2. What method can be used by two computers to ensure that packets are not dropped because too much data is being sent too quickly?

3. Which protocol is responsible for controlling the size and rate of the HTTP messages exchanged between server and client?

4. A user is viewing an HTML document located on a web server. What protocol segments the messages and manages the segments in the individual conversation between the web server and the web client?

5. A web client is sending a request for a webpage to a web server. From the perspective of the client, what is the correct order of the protocol stack that is used to prepare the request for transmission?

6. What are proprietary protocols?

7. Which IEEE standard enables a wireless NIC to connect to a wireless AP that is made by a different manufacturer?

8. What is an advantage of network devices using open standard protocols?

9. What is a function of Layer 4 of the OSI model?

10. Which statement is true about the TCP/IP and OSI models?

11. What is a benefit of using a layered model for network communications?

12. What is the general term that is used to describe a piece of data at any layer of a networking model?

13. Which PDU format is used when bits are received from the network medium by the NIC of a host?

14. At which layer of the OSI model would a logical address be encapsulated?

15. Which statement accurately describes a TCP/IP encapsulation process when a PC is sending data to the network?

16. What statement describes the function of the Address Resolution Protocol?

17. Which address provides a unique host address for data communications at the internet layer?

18. Which address does a NIC use when deciding whether to accept a frame?

19. Which protocol is used by a computer to find the MAC address of the default gateway on an Ethernet network?

20. If the default gateway is configured incorrectly on the host, what is the impact on communications?

21. Match the description to the organization. (Not all options are used.) 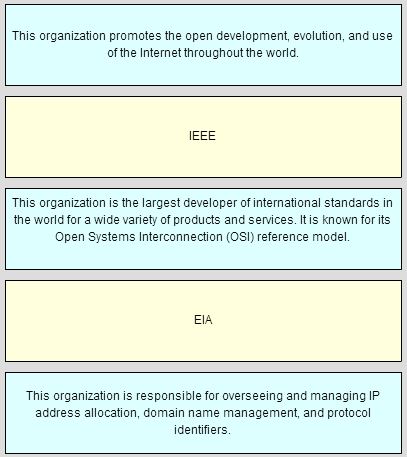 22. Open the PT Activity. Perform the tasks in the activity instructions and then answer the question.

Based on the configured network, what IP address would PC1 and PC2 use as their default gateway?