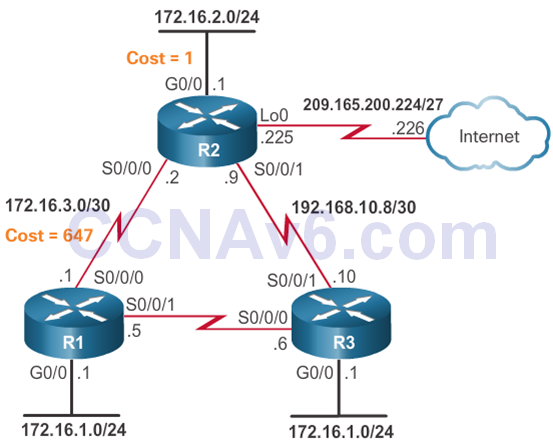 OSPF is a link-state routing protocol with a default administrative distance of 110, and is denoted in the routing table with a route source code of O.

OSPFv2 is enabled with the router ospf process-id global configuration mode command. The process-id  value is locally significant, which means that it does not need to match other OSPFv2 routers to establish adjacencies with those neighbors.

The network command used with OSPFv2 has the same function as when used with other IGP routing protocols, but with slightly different syntax. The wildcard-mask value is the inverse of the subnet mask, and the area-id value should be set to 0.

By default, OSPF Hello packets are sent every 10 seconds on multi-access and point-to-point segments and every 30 seconds on NBMA segments (Frame Relay, X.25, ATM), and are used by OSPF to establish neighbor adjacencies. The Dead interval is four times the Hello interval, by default.

The show ip protocols command is used to verify important OSPFv2 configuration information, including the OSPF process ID, the router ID, and the networks the router is advertising.