1. What is the result if the default gateway address is misconfigured on a PC?

2. Which type of address can be shared through NAT to enable home network devices to send and receive data over the internet?

Explanation: Network address translation (NAT) implemented on the home network router enables privately addressed devices to share a registered public IP address that can be routed over the internet.

4. What will happen if the default gateway address is incorrectly configured on a host?

Explanation: When a host needs to send a message to another host located on the same network, it can forward the message directly. However, when a host needs to send a message to a remote network, it must use the router, also known as the default gateway. This is because the data link frame address of the remote destination host cannot be used directly. Instead, the IP packet has to be sent to the router (default gateway) and the router will forward the packet toward its destination. Therefore, if the default gateway is incorrectly configured, the host can communicate with other hosts on the same network, but not with hosts on remote networks.

5. A home network is using NAT on the router connecting it to the internet. The PCs on the home network receive private IP addresses through DHCP. When a PC sends a packet to a web server on the internet, what is the source IP address in the packet header when it arrives at the web server?

Explanation: On a home router, NAT converts the source address in the IP packet from the internal private IP address to a registered public IP address assigned to the external interface on the router before sending it out over the internet.

6. A network administrator investigates a user problem. The user can reach hosts on the same network, but is unable to communicate to remote networks.The network administrator tries to ping the gateway address configured on the host device and is unsuccessful. What is the most likely cause of the problem?

Explanation: The default gateway address is used to forward packets to remote networks. The IP address of the host must be correct because the user can reach other hosts on the same network. The TCP/IP protocol stack is correct because of verified communication to hosts on the same network. The end device could be incorrectly configured, but the most likely cause of the issue is a wrong address for the default gateway.

7. Refer to the exhibit. The switches have a default configuration. Host A needs to communicate with host D, but host A does not have the MAC address for the default gateway. Which network devices will receive the ARP request sent by host A? 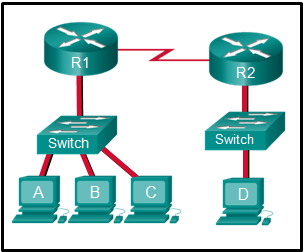 Explanation: Because host A does not have the MAC address of the default gateway in the ARP table, host A sends an ARP broadcast. The ARP broadcast would be sent to every device on the local network. Hosts B, C, and router R1 would receive the broadcast. Router R1 would not forward the message.

8. A host needs to reach another host on a remote network, but the ARP cache has no mapping entries. To what destination address will the host send an ARP request?

9. What is the purpose of ARP in an IPv4 network?

Explanation: ARP performs two functions:
– To obtain a specific MAC address when an IP address is known, by broadcasting an ARP request message to all devices on a particular Ethernet network
– To use the gathered information to create a viewable table of IP address to MAC address mappings

10. Which destination address is used in an ARP request frame?

11. The ARP table in a switch maps which two types of address together?

Explanation: The switch ARP table keeps a mapping of Layer 2 MAC addresses to Layer 3 IP addresses. These mappings can be learned by the switch dynamically through ARP or statically through manual configuration.

12. What action does the ARP process take when a host needs to build a frame, but the ARP cache does not contain an address mapping?

13. Which protocol is used by a computer to find the MAC address of the default gateway on an Ethernet network?

14. When a router receives a packet, what information must be examined in order for the packet to be forwarded to a remote destination?

Explanation: When a router receives a packet, it examines the destination address of the packet and uses the routing table to search for the best path to that network.

15. Refer to the exhibit. What does the router do after it determines that a data packet from Network 1 should be forwarded to Network 2? Explanation: When a router receives a frame on an interface, it strips the header containing the source and destination MAC addresses from the frame. The router checks the routing table to determine the interface to use to send the packet to its destination. The packet is then encapsulated in a new frame, with different header information.

16. Which portion of the network layer address does a router use to forward packets?

17. Refer to the exhibit. Workstation A sends an IP packet to workstation B. Which two statements describe the encapsulation of the packet as it passes through the network? (Choose two.)

Explanation: When a router receives a frame on an interface, it strips the Layer 2 frame header information from the frame. It checks the routing table to determine which interface to use to send the packet to its destination. Once the interface is known, the packet is encapsulated with a new frame header containing different source and destination MAC addresses.

19. Why is it important for the router to maintain an accurate routing table?

Explanation: Routers use routing tables to store information. Routing tables contain the addresses of networks and the best path to reach those networks.

20. Refer to the exhibit. Consider the IP address configuration shown from PC1. What is a description of the default gateway address?