Describe the types of routers available for small to medium-sized business networks.

A company with a small network with one site and a connection to the Internet might grow into an enterprise with a central location with numerous remote sites across the globe.

All enterprise networks must:

The LAN is the networking infrastructure that provides access to network resources for end users over a single floor or a building. The campus wired LAN uses a hierarchical design model to break the design up into modular layers.

Breaking the design up into layers allows each layer to implement specific functions, which simplifies the network design for easier deployment and management.

A hierarchical LAN design includes three layers as shown in the figure:

Some smaller enterprise networks implement a two-tier hierarchical design and collapse the core and distribution layers into one layer. The network designer must develop a strategy to enable the network to be available and scale easily and effectively.

Use expandable, modular equipment or clustered devices that can be easily upgraded to increase capabilities.

Design a hierarchical network to include modules that can be added, upgraded, and modified as needed.

Create an IPv4 or IPv6 address strategy that is hierarchical.

Choose routers or multilayer switches to limit broadcasts and filter undesirable traffic from the network.

Implement redundant links between critical devices and between access and core layers. Redundancy is an important part of the network design for preventing disruption of network services.

Minimize the possibility of a single point of failure by recognizing these facts:

STP provides a mechanism for disabling redundant paths in a switched network until the path is necessary such as when a failure occurs. A well-designed network should limit the size of failure domains.

A failure domain is the area of a network that is impacted when a critical device or network service experiences problems.

The function of the devices that fail will determine the impact of the failure domain.

Use redundant links and reliable enterprise-class equipment to minimize the disruption in a network. In the hierarchical design model, it is usually easier to control the size of a failure domain in the distribution layer.

In the distribution layer, network errors can be contained to a smaller area which will impact fewer users.

When using Layer 3 devices at the distribution layer, every router functions as a gateway for a limited number of access layer users.

In a hierarchical network design, some links between access and distribution layer switches may need to process a greater amount of traffic than other links do.

As multiple links converge into a single link, it is possible for this link to become a bottleneck.

EtherChannel is a form of link aggregation that will allow the network administrator to increase the amount of bandwidth between devices by creating one logical link out of several physical links.

The EtherChannel configuration takes advantage of load balancing between links that are part of the same EtherChannel. The network must be designed to be able to expand network access to individuals and devices, as needed.

Advantages of wireless connectivity include increased flexibility, reduced cost, and the ability to adapt to changing network and business requirements. Advanced routing protocols, such as OSPF and EIGRP are used in large networks.

Although the configuring EIGRP is simple, the underlying features and options of EIGRP are extensive and robust.

Non-backbone areas must be directly connected to Area 0.

Selecting the proper hardware to meet the current network requirements is critical when designing a network.

There are five categories of switches for enterprise networks:

Various factors to consider when selecting switches include these: The port density of a switch refers to the number of ports on a single switch.

The modular Catalyst 6500 switch shown in the figure can support over 1,000 switch ports. Forwarding Rates are an important factor when selecting a switch because if the rate is too low, it will not be able to support full wire-speed communication across all of its switch ports.

Access layer switches typically do not need to operate at full wire speed because they are physically limited by their uplinks to the distribution layer.

Higher performing switches are needed at the distribution and core layers.

Forwarding rates define the processing capabilities of a switch by rating how much data the switch can process per second.

PoE allows the switch to deliver power to a device over the existing Ethernet cabling.

This eliminates the need for a power cable to the networked device such an IP phone or wireless access point.

PoE allows more flexibility when installing wireless access points and IP phones by allowing them to be installed anywhere that there is an Ethernet cable.

PoE pass-through devices can power PoE devices as well as the switch itself by drawing power from certain upstream switches. Multilayer switches are typically deployed in the core and distribution layer.

Multilayer switches can do the following:

ASICs along with dedicated software can streamline the forwarding of IP packets independent of the CPU.

There is a trend in networking toward a pure Layer 3 switched environment. This Packet Tracer activity will allow you to use various commands to compare and examine three different switching topologies and compare the 2960 and 3560 switches. Routing is required within the distribution layer of an enterprise network. Without routing, packets could not leave the local network.

Routers are critical networking devices because they are responsible for: Selecting the proper router or routers is an important task for the network administrator in order to accommodate a growing network. There are three categories of routers: Routers come in many forms:

As an example, the Cisco 1941 router comes with two Gigabit Ethernet RJ-45 interfaces built-in and two slots that can accommodate many different network interface modules. 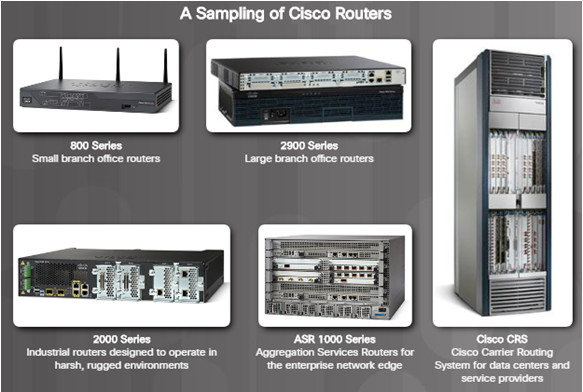 When selecting or upgrading a Cisco IOS device, it is important to choose the proper IOS image with the correct feature set and version.

IOS refers to the package of routing, switching, security, and other internetworking technologies integrated into a single multitasking operating system.

When a new device is shipped, it comes preinstalled with the software image and corresponding permanent licenses for the customer-specified packages and features.

There are two methods for connecting a PC to a network device for configuration and monitoring tasks: As shown in the figure to the left, a basic router configuration includes as follows:

To clear the router configuration, use the erase startup-config and reload commands. The following are some of the most common show commands:

Other connectivity related commands include show cdp neighbors. This command displays information on directly connected Cisco devices including Device ID, the local interface the device is connected to, capability, the platform, and Port ID of the remote device. The details option provides the IP address.

See the figure on the left for the commands used to enable and configure the switch.

Use the copy running-config startup-config command to verify and save the switch configuration.

Use the erase startup-config and reload commands to clear the switch configuration. Switches make use of common IOS commands for configuration, to check for connectivity, and to display current switch status. Here are some very useful commands: This Packet Tracer activity will require you to practice many of the skills that you have acquired so far during your CCNA studies.

You will first complete the documentation for the network before implementing various requirements.

Finally, you will be required to use your documentation to verify your implementation by testing end-to-end connectivity.