1. Match the definition to the type of cloud.

2. A data center has recently updated a physical server to host multiple operating systems on a single CPU. The data center can now provide each customer with a separate web server without having to allocate an actual discrete server for each customer. What is the networking trend that is being implemented by the data center in this situation?

3. What is an example of cloud computing?

4. Which two scenarios would benefit the user the most by adding quality of service (QoS) to the network? (Choose two.)

Explanation: Voice and video data need to be transmitted in a continuous stream. If packets are delayed, the audio and video quality will be poor, sometimes even not usable. QoS can give voice and video data high priority during the data transmission so that they would be sent first before other types of traffic, such as email, web surfing, and web page update.

5. An employee of a large corporation remotely logs into the company using the appropriate username and password. The employee is attending an important video conference with a customer concerning a large sale. It is important for the video quality to be excellent during the meeting. The employee is unaware that after a successful login, the connection to the company ISP failed. The secondary connection, however, activated within seconds. The disruption was not noticed by the employee or other employees.
What three network characteristics are described in this scenario? (Choose three.)

Explanation: Usernames and passwords relate to network security. Good quality video, to support video conferencing, relates to prioritizing the video traffic with quality of service (QoS). The fact that a connection to an ISP failed and was then restored but went unnoticed by employees relates to the fault tolerant design of the network.

7. What is the key difference between a type 1 hypervisor and a type 2 hypervisor?

8. Refer to the exhibit. Host A has sent a packet to host B. What will be the source MAC and IP addresses on the packet when it arrives at host B?

9. Which two statements are correct in a comparison of IPv4 and IPv6 packet headers? (Choose two.)

Explanation: The IPv6 packet header fields are as follows: Version, Traffic Class, Flow Label, Payload Length, Next Header, Hop Limit, Source Address, and Destination Address. The IPv4 packet header fields include the following: Version, Differentiated Services, Time-to-Live, Protocol, Source IP Address, and Destination IP Address. Both versions have a 4-bit Version field. Both versions have a Source (IP) Address field. IPv4 addresses are 32 bits; IPv6 addresses are 128 bits. The Time-to-Live or TTL field in IPv4 is now called Hop Limit in IPv6, but this field serves the same purpose in both versions. The value in this 8-bit field decrements each time a packet passes through any router. When this value is 0, the packet is discarded and is not forwarded to any other router.

10. Match the IPv6 packet header field with the description.

11. Which three IPv4 header fields have no equivalent in an IPv6 header? (Choose three.)

12. Refer to the exhibit. A ping to PC2 is issued from PC0, PC1, and PC3 in this exact order. Which MAC addresses will be contained in the S1 MAC address table that is associated with the Fa0/1 port?

13. Match field names to the IP header where they would be found. 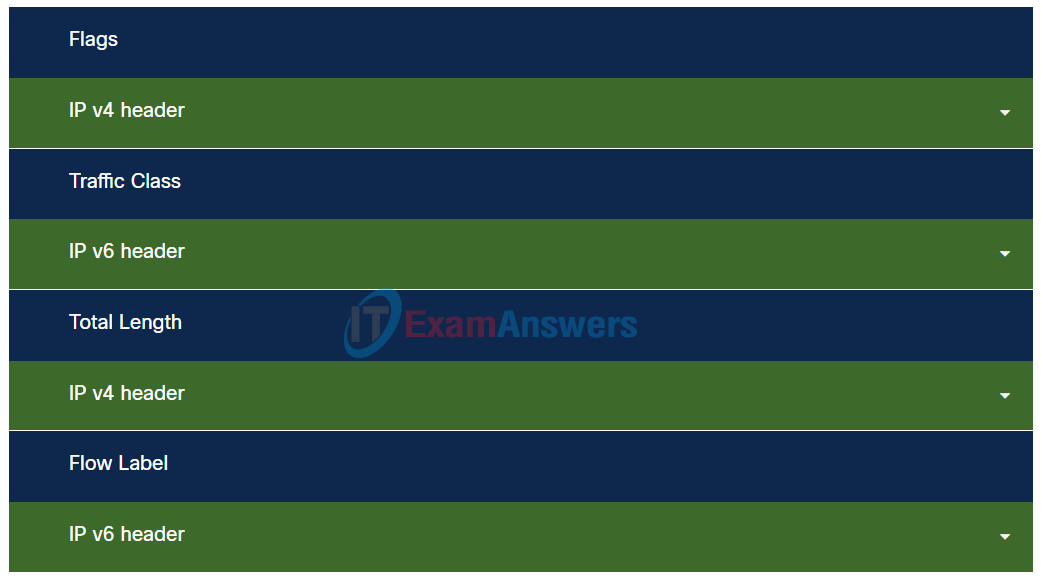 Explanation: Each section (octet) contains eight binary digits. Each digit represents a specific value (128, 64, 32, 16, 8, 4, 2, and 1). Everywhere there is a 1, the specific value is relevant. Add all relevant values in a particular octet to obtain the decimal value. For example binary 11001011 equals 203 in decimal.

15. Which two items are used by a host device when performing an ANDing operation to determine if a destination address is on the same local network? (Choose two.)

17. Which statement is true regarding the UDP client process during a session with a server?

Explanation: Because there are no sequence numbers in UDP segments, there is no possibility to arrange the datagrams in the correct order. Sessions and three-way handshake are related to TCP communications. UDP servers can use registered or nonregistered port numbers to listen to clients.

18. Match each DHCP message type with its description.

19. Refer to the exhibit. Which protocol was responsible for building the table that is shown? 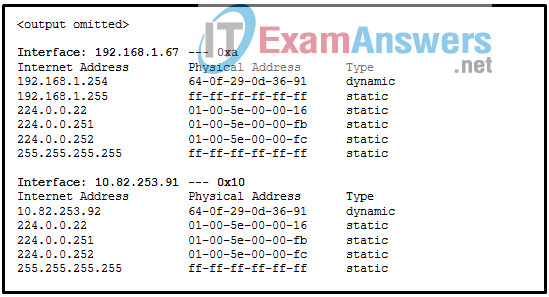 Explanation: The table that is shown corresponds to the output of the arp -a command, a command that is used on a Windows PC to display the ARP table.

20. Refer to the exhibit. A web designer calls to report that the web server web-s1.cisco.com is not reachable through a web browser. The technician uses command line utilities to verify the problem and to begin the troubleshooting process. Which two things can be determined about the problem? (Choose two.)

21. What are two potential network problems that can result from ARP operation? (Choose two.)

Explanation: Large numbers of ARP broadcast messages could cause momentary data communications delays. Network attackers could manipulate MAC address and IP address mappings in ARP messages with the intent to intercept network traffic. ARP requests and replies cause entries to be made into the ARP table, not the MAC address table. ARP table overflows are very unlikely. Manually configuring static ARP associations is a way to prevent, not facilitate, ARP poisoning and MAC address spoofing. Multiple ARP replies resulting in the switch MAC address table containing entries that match the MAC addresses of connected nodes and are associated with the relevant switch port are required for normal switch frame forwarding operations. It is not an ARP caused network problem.

22. Match the TCP flag to the correct step in the session establishment sequence.

23. What is the difference between the terms keyword and argument in the IOS command structure?

Explanation: Keywords are specific parameters that are defined in IOS. Arguments are not predefined; they are the variables defined by the user when completing a command. Although most keywords appear directly after commands, they can appear in other locations, depending on a command structure. A keyword can be entered in its whole length or in a shortened format.

24. Which three commands are used to set up secure access to a router through a connection to the console interface? (Choose three.)

Explanation: The three commands needed to password protect the console port are as follows:

25. What three configuration steps must be performed to implement SSH access to a router? (Choose three.)

Explanation: To implement SSH on a router the following steps need to be performed:

26. Refer to the exhibit. What is the maximum TTL value that is used to reach the destination www.cisco.com?​ 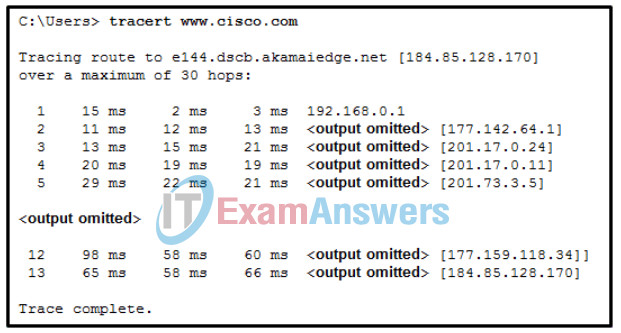 Explanation: Traceroute (in this case the command tracert) sets the TTL field to a value of 1 and sends the packet. At each router hop, this value is decreased by one and a “TTL expired” message is sent back to the source host. This message has a source address which is used by the host to build the trace. The host then progressively increments the TTL field (2, 3, 4…) for each sequence of messages until the destination is reached or it is incremented to a predefined maximum. Because the executed command reached the destination in the 13th line, the TTL was increased up to the value of 13.

27. Which protocol is used by IPv4 and IPv6 to provide error messaging?

Explanation: ICMP is used by IPv4 and IPv6 to provide for messages to be sent in the event of certain errors and for informational purposes.

28. The global configuration command ip default-gateway 172.16.100.1 is applied to a switch. What is the effect of this command?

Explanation: A default gateway address is typically configured on all devices to allow them to communicate beyond just their local network.In a switch this is achieved using the command ip default-gateway <ip address>.

29. Match the router prompt to the configuration task.

30. While troubleshooting a network problem, a network administrator issues the show version command on a router. What information can be found by using this command?

Explanation: The show version command displays much information about the device, including the amount of memory (flash, NVRAM, and DRAM) that is installed on the device. Explanation: When a switch receives a frame with a destination that it does not already have in its CAM table, it will forward the frame out all ports except the one on which the frame was received. This is called unknown unicast flooding.

32. Which forwarding action does a switch take when the destination MAC address of an Ethernet frame is an unknown unicast?

33. Refer to the exhibit. An administrator is troubleshooting connectivity on the office network. PC1 is able to send print jobs to Printer1, but is unable to access File Server1. Which action would correct the problem? 34. Match the characteristic to the protocol category. 35. The ARP table in a switch maps which two types of address together?

Explanation: The switch ARP table keeps a mapping of Layer 2 MAC addresses to Layer 3 IP addresses. These mappings can be learned by the switch dynamically through ARP or statically through manual configuration.

36. A network administrator issues the Switch# show running-config command on a Cisco switch. Which term is used to describe the part “running-config” in the command?

37. The global configuration command ip default-gateway 172.16.100.1 is applied to a switch. What is the effect of this command?

Explanation: A default gateway address is typically configured on all devices to allow them to communicate beyond just their local network.In a switch this is achieved using the command ip default-gateway <ip address>.

38. What is the purpose of the MAC address which is added to an e-mail message that is sent from a teacher to a student?

Explanation: A Media Access Control (MAC) address is unique on every device. An Internet Protocol (IP) address is used to communicate with devices on another LAN or on the Internet.

39. What is the purpose of assigning an IP address to the VLAN1 interface on a Cisco Layer 2 switch?

40. Which command should be used to test connectivity to the loopback interface?​

Explanation: The ping 127.0.0.1 command tests the TCP/IP stack through the loopback interface.