Organizations, both large and small, are investing heavily in virtualization and cloud computing. It is therefore important for IT technicians and professionals to understand these two technologies. While the two technologies do overlap, they are, in fact, two different technologies. Virtualization software allows one physical server to run several individual computing environments. Cloud computing is a term used to describe the availability of shared computing resources, software or data, as a service and on-demand over the Internet.

In this chapter, you will learn about the advantages that virtualization has over the traditional use of dedicated servers, such as using fewer resources, requiring less space, reducing cost, and increasing server uptime. You will also learn the terms that are used when discussing client-side virtualization, like host computer, which refers to the physical computer controlled by a user. The host OS is the OS on the host computer, and the guest OS is the OS running in the virtual machine on the host computer.

You will learn about the two types of hypervisors: Type 1 (native) hypervisor, also called bare metal hypervisor, and Type 2 (hosted) hypervisor. You will also learn the minimum system requirements to run Windows Hyper-V, which is a type 2 hypervisor, in Windows 7, WIndows 8, and Windows 10.

It is important to not only learn about virtualization and cloud technology but to also build hands-on skills. In this chapter you will complete a lab installing Linux in a virtual machine.

Click Play in the figure to view a video about the cloud.

Click here to read the transcript of this video.

The terms “virtualization” and “cloud computing” are often used interchangeably although they mean different things. Virtualization enables a single computer to host multiple independent virtual computers that share the host computer hardware. Virtualization software separates the actual physical hardware from the virtual machine (VM) instances. VMs have their own operating systems and connect to hardware resources through software running on the host computer. An image of a VM can be saved as a file and then be re-started when required.

It is important to remember that all the VMs share the resources of the host computer. Therefore, the limiting factor on the number of VMs that can run at the same time is directly related to the amount of processing power, memory, and storage.

Cloud computing separates the applications from the hardware. It provides organizations with on-demand delivery of computing services over the network. Service providers such as Amazon Web Services (AWS) own and manage the cloud infrastructure that includes the networking devices, servers, and storage devices and is usually housed in a data center.

Virtualization is the foundation which supports cloud computing. Providers such as AWS offer cloud services using powerful servers that can dynamically provision virtual servers as required.

Without virtualization, cloud computing, as it is most-widely implemented, would not be possible.

To fully appreciate virtualization, it is first necessary to understand how servers are used in an organization.

Traditionally, organizations delivered applications and services to their users using powerful dedicated servers as shown in the figure. These Windows and Linux servers are high-end computers with large amounts of RAM, powerful processors, and multiple large storage devices. New servers are added if more users or new services are required. Problems with the traditional server deployment approach include:

Virtualizing servers to use resources more efficiently addresses these problems.

Server virtualization takes advantage of idle resources to reduce the number of servers required to provide services to users. A special program called the hypervisor is used to manage the computer resources and various VMs. It provides VMs access to all of the hardware of the physical machine such as CPUs, memory, disk controllers, and NICs. Each of these VMs runs a complete and separate operating system.

Improved disaster recovery
Virtualization offers advanced solutions to keep business continuing during a disaster. VMs can be copied to other hardware platforms that may even be in a different data center.

Support for legacy systems
Virtualization can extend the life of OSs and applications providing more time for organizations to migrate to newer solutions.

9.1.1.6 – Check Your Understanding – Match the Advantages of Virtualization 9.1.1.6 – Check Your Understanding – Match the Advantages of Virtualization

Client-side virtualization is beneficial for IT staff, IT support people, software developers and testers, and for educational reasons. It provides users with resources to test new operating systems, software, or to run older software. It can also be used to sandbox and create a secure isolated environment to open or run a suspicious file. Some terms that are used when discussing client-side virtualization include:

Host and guest operating systems do not need to be of the same family. For example, the host OS could be Windows 10, while the guest OS is Linux. This is of benefit for users that need to increase the functionality of their host computer by running multiple operating systems at the same time.

The figure displays a logical virtual machine diagram. The bottom gray box represents the physical computer with its host OS (e.g., Windows 10). Hyper-V, Virtual PC, and VirtualBox are examples of virtualization software or emulator that could be used to create and manage the three VMs shown in the top of the figure.

The hypervisor, also called the Virtual Machine Manager (VMM), is the brain of virtualization. The hypervisor is the software used on the host computer to create and manage VMs.

The hypervisor allocates the physical system resources, such as CPU, RAM, and storage, to each VM as needed. This ensures that the operation of one virtual machine does not interfere with another.

There are two types of hypervisors, as shown in Figure 1. Type 2 hypervisors such as VMware Workstation works with the host computer to create and use multiple VMs. Windows Hyper-V is also included in Windows 10 Pro and Windows Server (2012 and 2016). Client-side emulators can run software meant for a different guest OS or an OS meant for different hardware. For example, if the host OS was Linux and we are creating a VM using Windows 7 to run an application that only runs in Windows 7. The Linux host computer will pretend to be a Windows 7 computer.

Like a physical computer, VMs are susceptible to the same threats and malicious attacks. Although VMs are isolated from the host, they can share resources (e.g., NIC, folders, and files). Users should exercise the same security considerations as the host and install security software, enable firewall features, install patches, and update the operating system and programs. It is also important to keep the virtualization software updated. 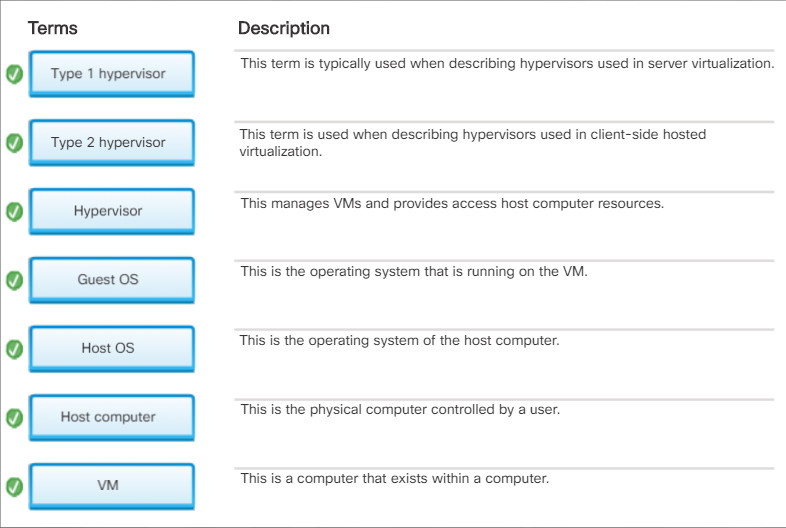 In this lab, you will install a Linux OS in a virtual machine using a desktop virtualization application, such as VirtualBox. After completing the installation, you will explore the GUI interface.

9.1.2.5 Lab – Install Linux in a Virtual Machine and Explore the GUI

Virtual desktop (infrastructure VDI)
An organization can use this technology to deploy entire desktop environments from a server in a data center to clients. The virtual desktops are created by a VM controlled by a hypervisor. However, all computing on the VDI is done on servers. VDIs can be persistent which provides the user with a customizable image that is saved for future use or non-persistent which reverts the image back to its initial state when a user logs out.

Windows Virtual Desktop (WVD)
This is a virtual desktop enabled edition of Windows 10 that runs on modern or legacy computers or remotely on Azure virtual machines. It provides a virtualized Windows 10 experience that is always up to date and available on any device.

Software as a Service (SaaS)

Platform as a Service (PaaS)

Infrastructure as a Service (IaaS)

Cloud service providers have extended the IaaS model to also provide IT as a service (ITaaS). ITaaS can extend the capability of IT without requiring investment in new infrastructure, training new personnel, or licensing new software. These services are available on demand and delivered economically to any device anywhere in the world without compromising security or function.

Private
Bob arrives at his office in the Department of Transportation. He logs onto his computer and reviews his budget for the asphalt required for the extension of the road due to the proposed building of a new shopping mall.

Public
Bob uses Gmail to email his friend to tell him he will not be able to meet him after work because he is working late on a project.
Choose the cloud model that is most likely used in this scenario

Community
Andrea is a project manager for an asphalt company. She is submitting a bid to the Department of Transportation’s vendor website to build the new road required for the development of a new shopping center.

Hybrid
A resident of Smithtown needs information from the Department of Transportation’s website to better understand how the proposed new shopping mall will impact traffic in her community. After she learns that the traffic volume may double on her road, she leaves a public comment protesting the building. On-demand (self-service)
Individuals can provision or make changes to computing services as needed without requiring human interaction with the service provider.

Rapid elasticity
Services can be provisioned when needed and then released very quickly when no longer required. In some cases, the demand can be met and scale automatically based on the user demand.

Resource pooling
The provider’s computing resources are pooled to serve multiple consumers using a multi-tenant model. Each model, each tenant (i.e., customer) shares the different physical and virtual resources dynamically assigned and reassigned according to consumer demand. Examples of resources that can be pooled and shared include storage, processing, memory, and network bandwidth.

Measured and metered service
Cloud systems provide service performance measurements that can be used to automatically control and optimize resources using a metering mechanism. Metering can be used to set thresholds to ensure that a customer is always provided with satisfactory service levels. Measured and metered services also provide reports for both the provider and service consumer.

Broad network access
Capabilities are available over the network and can be accessed using smartphones, tablets, laptops, and workstations. You learned that the traditional way of delivering applications and services to users by using dedicated servers is inefficient, unreliable, and not scalable. Dedicated servers can sit idle for long periods, they are a single point of failure, and they take up a lot of physical space. Virtualization solves these issues by consolidating many virtual servers onto a single physical server, taking advantage of idle resources and reducing the number of servers required to provide services to users. You learned the many advantages that virtualization has over the traditional use of dedicated servers, such as better use of resources, less space required, reduced cost, and increased server uptime.

Cloud computing provides users with on-demand delivery of computer services over the Internet. Most of us already use these services when we access online music services or online data storage. You learned about the types of cloud services offered by cloud service providers. SaaS which provides access to services, such as email, calendar, communication, and office tools over the Internet on a subscription basis. PaaS which provides access to operating systems, development tools, programming languages, and libraries used to develop, test, and deliver applications. And, IaaS which provides organizations access to network equipment, virtualized network services, storage, software, and supporting network infrastructure.

The chapter concluded with several exercises to test your understanding of cloud computing terminology and characteristics.